Cleaning Up After ‘100-Year Flood' Tears Through Bucks County

Residents in Bensalem and other Bucks County, Pennsylvania, communities started to take stock of the damage left behind Tuesday by a once-in-100-years flood that struck Monday.

The flooding closed several major roads, flooded homes and led to water rescues throughout parts of the county.

The National Weather Service said that anywhere from 6 to 10-plus inches of rain fell in three to four hours in neighborhoods like Bensalem, Croydon, Bristol and Florence near the Delaware River in Bucks and Burlington counties.

"This is estimated to be a 100 year flood," the weather service's Mt. Holly office tweeted.

The 100-year flood estimation means that each year there is about a 1% chance of seeing this much rain.

A flash flood emergency was in effect for lower Bucks/far NW Burlington counties and adjacent areas Monday night. That declaration is reserved for particularly dangerous flooding situations and is normally issued only once or twice a year in our area.

The inches of rain caused flooding, especially along the Poquessing and Neshaminy creeks.

At the Lafayette Gardens apartments, off Bristol Pike and next to the Poquessing Creek in the Andalusia section of Bensalem Township, windows were smashed out and cars were damaged after being moved by the rushing water. A deck of cards could be seen scattered outside one of the front doors, many marked with "X" meaning that a search of the home had been done.

Residents were trying to pick up items they could while surveying the damage.

The county government said that crews were fanned out across the lower end of Bucks County Tuesday to repair downed power lines and address flooding damage.

County and local officials examined the damage Tuesday. Officials from FEMA are communicating with those officials.

The American Red Cross aided at least 56 people overnight who evacuated to a shelter set up at Snyder Middle School in Bensalem, Pennsylvania.

From Monday afternoon through the evening, there were reports of flooding and water rescues in Bucks County after vehicles were submerged in water along Bristol Pike. 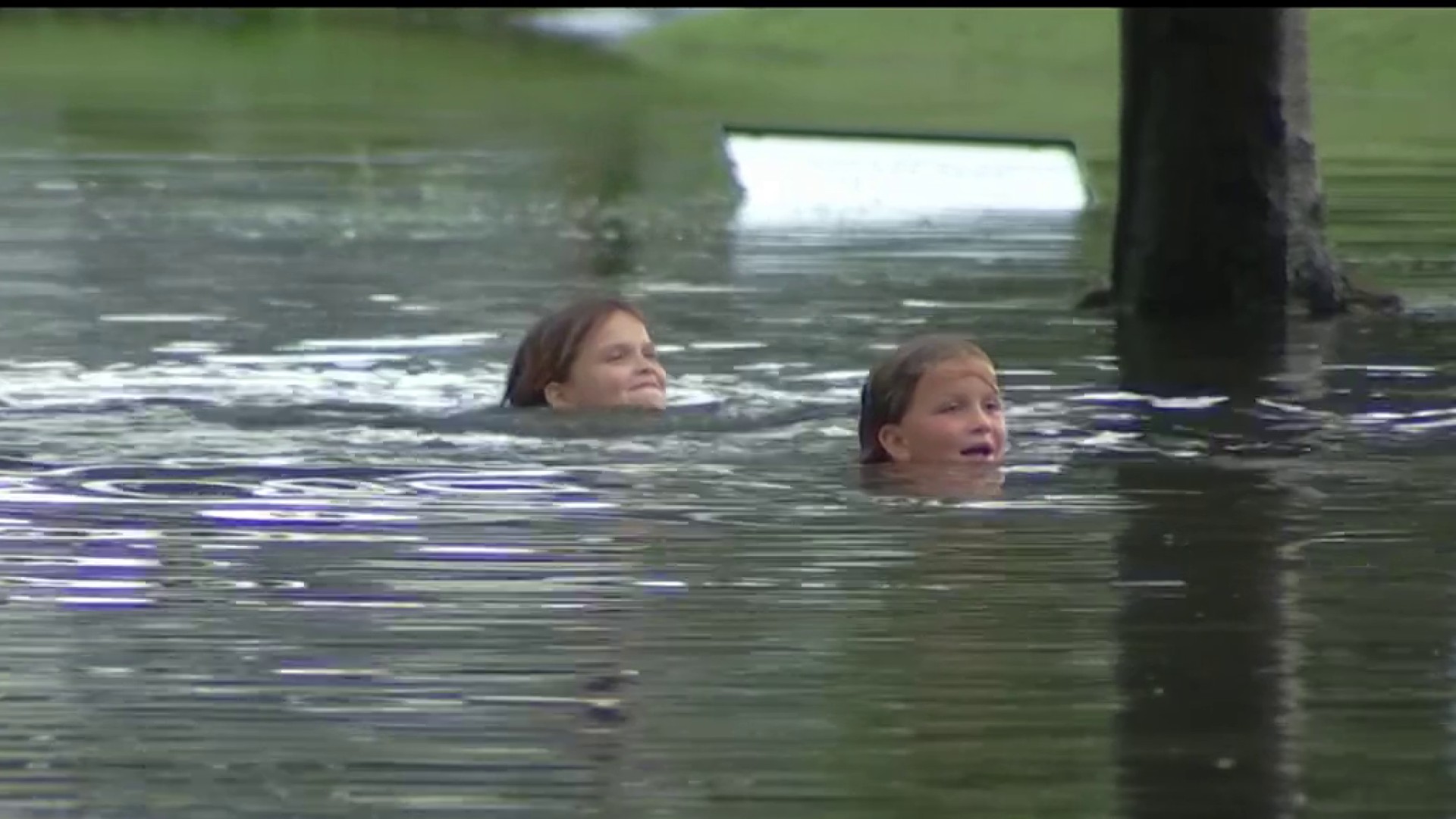 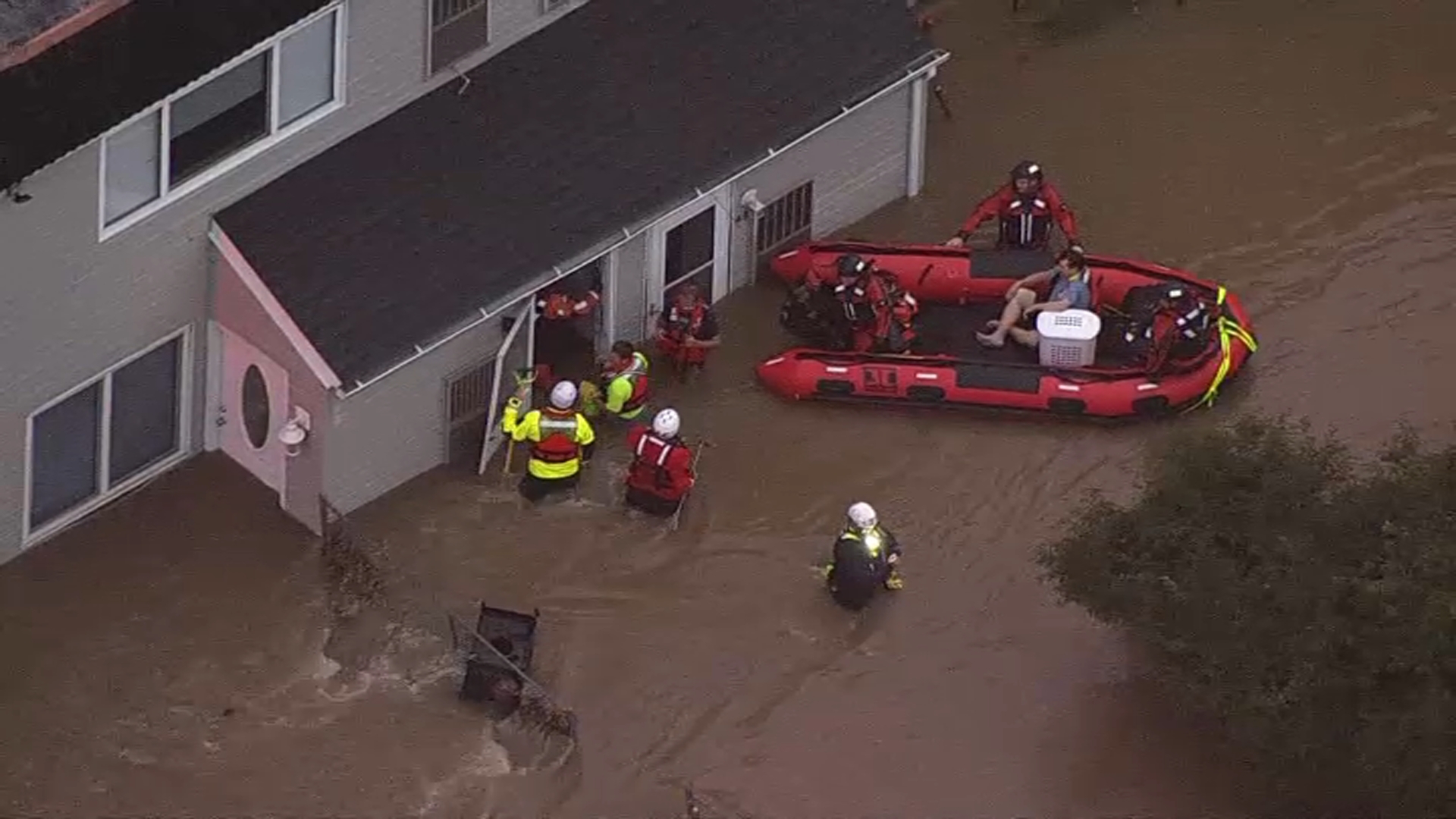 One resident of Bristol had about a foot of water in his basement after the rains, and his whole back yard flooded. The water had an oily sheen that particularly alarmed him, he told NBC10's Danny Freeman.

"I've been here 38 years and I never saw so much at once," Jim Camppell of Bristol told NBC10.

Ray Herzog had to pump water out of his Bristol home with a hose. But he knew the damage had already been done.

"It's bad. it's floating. It's destroyed," Herzog said. "Most of it's probably destroyed."

SkyForce10 was over the scene as crews rescued residents from flooded homes along Bristol Pike.

SkyForce10 was above the scene as crews rescued residents from floodwaters along Bristol Pike in Bucks County.

Christine Cagnetti drove down to Wilson Avenue when she learned that her daughter and 2-month-old granddaughter were trapped in a car that was stuck in floodwater.

"They thought it was just a little puddle and they drove through it and here we are," she said. "I just needed to get to them because the lightning was crazy and I was worried for them."

All three of them made it out safe.

Just an inch of rain from scattered storms that could hit later on Tuesday could lead to more flooding.

As always, be sure to have the latest version of the NBC10 app downloaded to get weather alerts sent to your phone. For the latest on stormy weather watch NBC10 News.