From the field to the track to the pool, there are Philadelphia-area Olympians looking to medal in Tokyo

New Jersey's Carli Lloyd might have taken the field for the final time as an Olympian. If it was, she left on a high note scoring twice as the U.S. Women's National Team beat Australia for bronze.

In the pool, Princeton alum Ashleigh Johnson led the U.S. women's water polo team as they advanced to the gold medal game.

Here are five to watch in Tokyo and how to catch the action Wednesday night into Thursday morning:

The U.S. women's soccer team got back to the Olympic podium.

The team wasn’t standing atop the perch they expected, nor were the medals around the players' necks the color they hoped, but they made an important return to the podium after failing to get there in 2016 for the first time.

It was two of the team's gold-medal winning veterans who helped get them there Thursday. Megan Rapinoe and New Jersey native Carli Lloyd each scored two goals to lead the U.S. to a 4-3 win over Australia in the bronze medal game at the Tokyo Olympics.

It was fitting that Delran's Lloyd, who became the team’s all-time leading scorer by striking twice in what could be her final Olympic game, and Rapinoe, who stressed the importance of winning a medal even if its not the color the team wanted to expected, who helped deliver the bronze.

It was the first bronze medal for the USWNT. The U.S. won gold in four of the first five Games since women's soccer became an Olympic sport in 1996, taking silver during the 2000 Sydney Olympics.

Grant Holloway finished second to claim silver in men's 110m hurdles, posting a time of 13.09 despite being the overwhelming favorite to win it all.

The world champion blazed to the quickest time in the hurdles semifinals, but was unable to hold on to the top spot in the final.

Hansle Parchment of Jamaica won gold in the upset, posting a time of 13.04, and handed Holloway his first loss of the year. Jamaica also won gold in the 2016 Rio Olympics.

The 2016 Rio champion defended his title while breaking the Olympic shot put record with a 23.30m throw on his first attempt.

Kovacs finished with a throw of 22.65 and Tomas Walsh of New Zealand won bronze.

Team USA, which comprised of Javianne Oliver, New Jersey native English Gardner, Teahna Daniels and Aleia Hobbs finished ahead of Team Jamaica -- despite Shericka Jackson nipping on their heels in the last leg.

They will be on the track in the final, which will take place on Friday at 9:30 a.m. ET.

Vashti Cunningham, daughter of legendary Eagles quarterback Randall Cunningham, was the only member of Team USA to advance in women's high jump.

Cunningham automatically qualified after posting a jump of 1.95m on her third and final attempt. She placed 13th in high jump at the 2016 Rio Olympics, and is a favorite to win it all at Tokyo.

Rachel McCoy (1.86m) and Tynita Butts-Townsend (1.82m) were unable to qualify after their highest jumps landed them in the 25th and 31st place respectively.

The United States did not advance in the men's 4x100m relay that took place on Wednesday night, something Olympic legend Carl Lewis called a "total embarrassment." 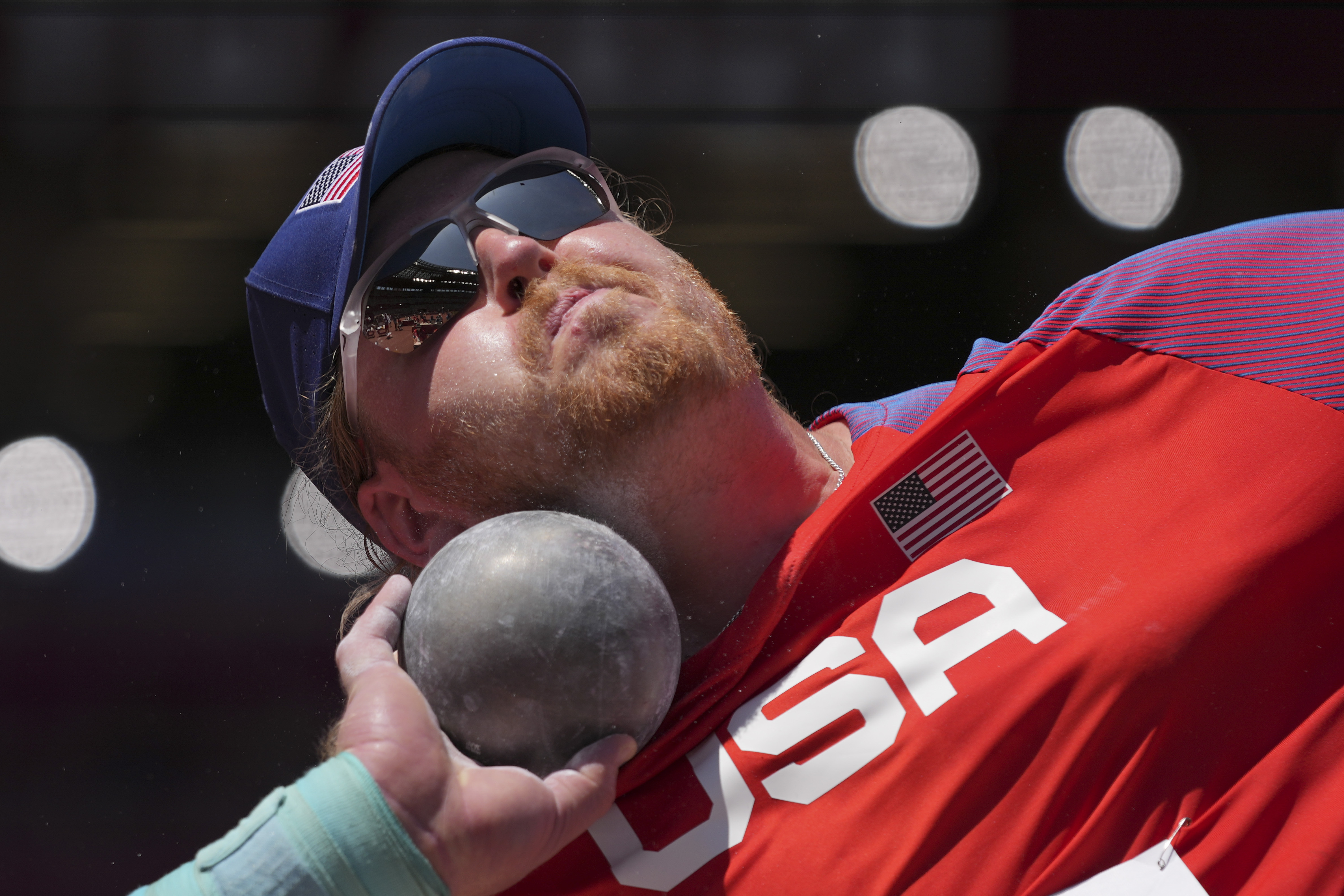 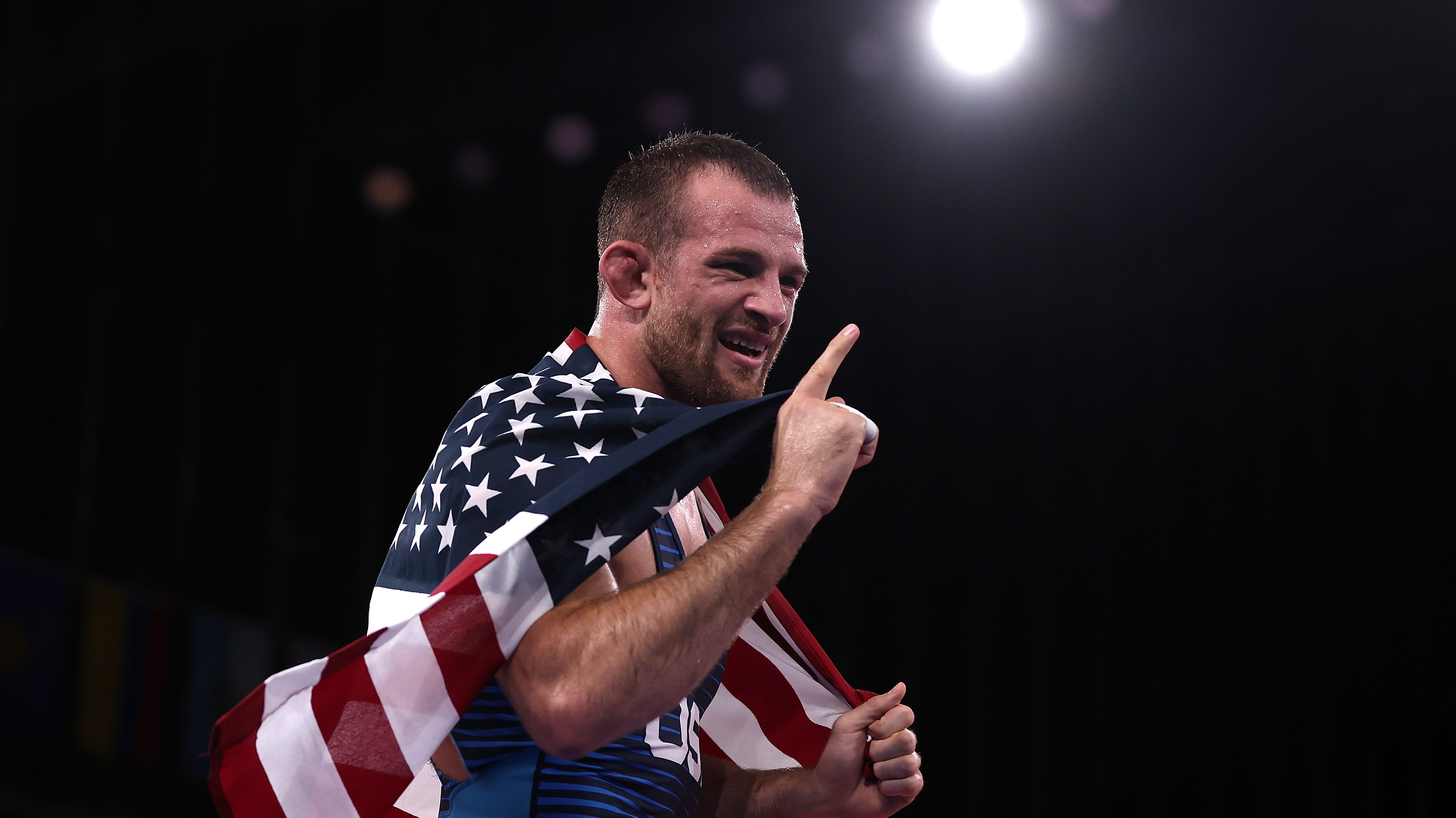 The United States continued its domination in Track and Field in Tokyo on Thursday, this time turning in golden performances in the field events.

Katie Nageotte took the gold medal in in the women’s pole vault. In the pole vault, Nageotte cleared a 4.9-meter vault, beating Russia’s Anzhelika Sidorova and Great Britain’s Holly Bradshaw, who both cleared 4.85 meters. It was the third time the U.S. won gold in the event.

In all, the U.S. has won 20 medals in track and field in Tokyo. The closest to Team USA? Jamaica, with seven.

Vashti Cunningham was the only member of Team USA to advance to the finals in women’s long jump.

David Taylor, an alum of Penn State, has won gold in the men’s freestyle 86kg final against Hassan Yazdani.

Taylor mounted a comeback against Iran’s Yazdani to win gold.

Down 3-2 with less than 20 seconds remaining, Taylor was able to get on top of Yazdani and notch the critical two points to give him the lead and let the clock tick away.

Yazdani earned a point early after Taylor failed to go for a point attempt. Taylor, or better known as the “Magic Man,” then got a two-point takedown but Yazdani secured back-to-back points by forcing Taylor out of bounds before the American was able to get the comeback in the final seconds of the match.

There has been two versions of the U.S. men's basketball team during the Tokyo Olympics. And both showed up during a tale of two halves in the team's semifinal matchup.

There was the first-half version, the one that trailed by 15 points and seemed destined to fight for bronze. And there was the second-half version, a dominant force that turned the game around and seemed destined to steamroll any opponent during its quest for a fourth straight gold medal. Team USA is now one victory from doing just that after defeating Australia 97-78 on Thursday.

A 28-4 U.S. run that started late in the second quarter and carried into the third turned what had been a 15-point deficit into a comfortable lead. The United States advanced to the gold medal game against France on Friday at 10:30 p.m. ET.

Kevin Durant led the way with 23 points and nine rebounds, placing him one win away from tying Carmelo Anthony's Olympic record of three gold medals in basketball. Devin Booker added 20 points on 7-for-10 shooting.

The U.S. women’s water polo team rallied from a three-point deficit to trounce the Russian Olympic Committee in a 15-11 victory.

With that win, Team USA -- with Princeton alum Ashleigh Johnson in net -- moves to the gold-medal match and will face either Spain or Hungary, who face each other in the second semifinal at 6:50 a.m. ET.

The U.S., gold medalists in London 2012 and Rio 2016, were on the verge of crashing out before the final until a late push helped them over the line. With just over five minutes left, Aria Fischer put the U.S. ahead 12-11. From there, Alys Williams and Madeline Musselman ensured the win with 3 points between them.

The win was partly thanks to three points from captain Maggie Steffens. Steffens is the all-time leading Olympic scorer in the sport.

The U.S. women’s water polo team advanced to the gold medal match after a late surge gave them a 15-11 victory over the ROC.