Suni Lee picked up where Simone Biles left off and won the women's gymnastics all-around.

In the pool, star swimmer Caeleb Dressel added to his golden resumé, setting a record in the process, while Pennsylvania native Hali Flickinger added to her medal count.

Indoors, some Penn State alums looked to keep it rolling in women's volleyball while American fencers came up just short of a medal in the team fencing competition.

Plus, men's golf got underway.

Simone Biles only completed one vault before exiting Tuesday's team gymnastics final, where the team earned silver. USA Gymnastics later announced that Biles would miss the individual all-around final Thursday, to focus on her mental health. Biles was the defending gold medalist in the event and compiled the highest all-around score in qualifying.

Steps in Suni Lee, who kept the American dominance going. 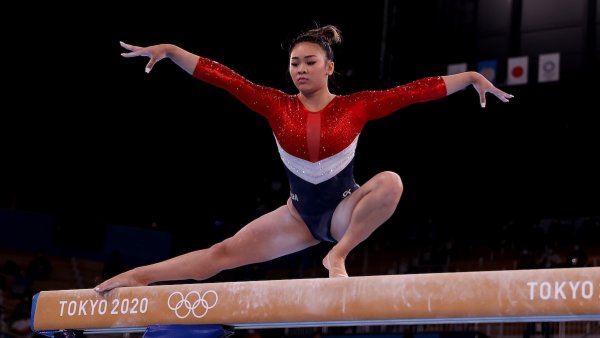 Gymnast Suni Lee's Dad Couldn't Afford a ‘Real' Beam, So He Built One Instead

For the fifth straight Olympic Games, an American woman was crowned queen of the all-around.

Brazil's Rebeca Andrade came in second after stepping out of bounds twice in her floor routine. ROC's Melnikova rounds out the podium in third.

American Caeleb Dressel won gold in the 100-meter freestyle event, setting an Olympic record in the process. Dressel was followed by Kyle Chalmers of Australia, who won the silver, and Kliment Kolesnikov of Russia.

An emotional Dressel cried during the post-race interview: “I don’t know if it’s set in yet. Right now, I’m just kind of hurting. It’s a really tough year, it’s really hard, so to have the results show up, it really came together, so I’m happy.”

Finke, competing in his first Olympics, was fourth at 750 meters and passed Italy's Gregorio Paltrinieri, who had held the lead through most of the race.

"I just really wanted to get my hand on the wall," Finke said. "I’m just so happy I was able to switch into another gear."

The 21-year-old pulled ahead of three swimmers in the final lap to win the race.

Paltrinieri came in second place to win the silver medal, and Ukraine's Mykhailo Romanchuk finished in third for a bronze medal.

In the women’s 200m butterfly, American Regan Smith won silver, and her teammate, Pennsylvania's Hali Flickinger, took home bronze, which was her second so far of the Tokyo games. Zhang Yufei captured gold for China.

In the men’s 200-meter breaststroke final, Australian Izaac Stubblety-Cook won the gold medal, while Arno Kamminga of the Netherlands got silver and Matti Mattson of Finland brought home the bronze.

New Jersey native Nic Fink finished fifth, less than a second outside of the medals.

Anton Chupkov, the Russian world-record holder for the event, also finished just outside the medals, coming in fourth.

The 22-year-old Stubblety-Cook has been in great form, and continued that form in the final. The Australian set an Olympic record in the event with a time of 2:06.38.

The U.S. women's 4x200m relay team won the silver medal. China came in first for the gold medal and Australia finished behind the U.S. for the bronze medal.

All three teams that reached the podium beat the previous world record.

Team USA's quartet was made up of Allison Schmitt, Paige Madden, Katie McLaughlin and Katie Ledecky.

The Americans had yet to concede a set so far in Tokyo, winning their opening match against Argentina and second match against China in straight sets. The second victory was particularly impressive with China entering the tournament as the defending Olympic gold medalists.

Penn State alums Micah Hancock and Haleigh Washington are on the squad.

The U.S. is aiming to make its fourth straight Olympic podium and claim its first ever Olympic gold in the event.

The U.S. women’s volleyball team beat Turkey in a fifth-set tiebreaker on Thursday.

Lee Kiefer made history by becoming the first American to win Olympic gold in an individual foil event. She almost grabbed another medal in the team foil.

The United States fell to Italy in the women’s team foil bronze medal match by a score of 45-23.

The trio of Kiefer Lee, Sabrina Massialas and Nicole Ross lost eight out of the nine sets against Italy. Lee, who won the gold medal in the women’s individual foil, did not win any of her three sets.

Nicole Ross won the first set 5-3 against Italy’s Arianna Errigo. However, the combination of Errigo, Martina Batini, Alice Volpi and Erica Cipressa won the rest against the U.S. to claim bronze, outscoring the Americans 15-3 in the final three to pull away for the victory.

After beating Japan 45-36 in the quarterfinals, the Americans lost to the ROC in the semifinals 45-42 to pit them against Italy for the bronze. With the fourth-place finish, the United States are still looking for their second medal in the women's team foil event.

Team USA came in fourth in women’s team foil, missing out on the bronze medal after losing to Italy 45-23.

Round 1 of the men's Olympic golf tournament entered a delay around 1 a.m. ET on Thursday.

Play was suspended due to lightning threats in the area.

After being delayed earlier Thursday morning due to lightning, the round ended out with none of the four Americans competing inside the top 10. The four Americans were the top four ranked golfers in the tournament entering Olympic play.

Austria's Sepp Straka, who came into the Olympics ranked No. 40 out of the 60 competitors, holds the lead with a score of 63, good for 8-under par. He scored four birdies on both the front and back nine and did not shoot worse than par on any other hole.

Out of the Americans, Xander Schauffele and Patrick Reed had the best rounds, both shooting 3-under par. After a bogeyless first nine, Schauffele coughed up two bogeys on the back nine, one coming on the final hole of the round, to push his score to a 68. He currently sits tied for 12th.

Reed, the replacement for Bryson DeChambeau, was on pace to be near the top of the leaderboard with a -3 through the front nine, but two bogeys on the back, one coming on 17, caused him to come out even on the final nine holes and end the round 3-under par.