Of course, Hurts didn’t lose this game on his own. There were plenty of reasons why the Eagles were thoroughly bullied by their biggest rival on a national stage. It really was a group effort.

But Hurts was undoubtedly a large part of the loss. The 23-year-old did not play well. 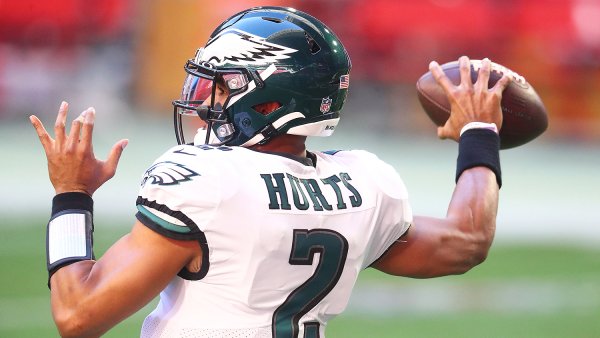 Hurts finished the game completing 25 of 39 passes for 326 yards with 2 touchdowns and 2 interceptions. One of his interceptions was returned for a touchdown.

No matter what questions Hurts was asked after the loss, his responses were very similar:

I need to get better.

I didn’t play as well as I needed to.

I'm going to learn from this and get better.

It’s refreshing to hear this level of accountability from the starting quarterback — he spoke using “I” and not “We.” It’s easy to see why Hurts’ teammates gravitate toward him. He was willing to take the blame on Monday night and that’s admirable.

The problem is that as refreshing as it is to hear all that, it doesn’t take away from the fact that Hurts was right. He does need to play better.

Head coach and play caller Nick Sirianni didn’t make it easy on Hurts either. After spending all offseason talking about building the offense around Hurts’ strengths, the game plan on Monday night was basically to have Hurts drop back and pass a million times in an attempt to keep up with the Cowboys. Starting running back Miles Sanders — healthy as an ox — had just two carries.

Hurts noted that Sanders didn’t get touches but still made no excuses for his play.

“Play calling was not an issue in the game,” Hurts said. “I was the issue in this game.”

We all understand what’s at stake for Hurts this season. The Eagles will want to know by year’s end whether or not the 2020 second-round pick has what it takes to be their long-term franchise quarterback. Fair or not, the Eagles value the quarterback position and value having an elite player in that spot. If they don’t think Hurts can be that type of player, they will have the ammo to make a move for someone they think can.

The good news for Hurts is that he’ll get another shot next week.