Embiid Scores 24 Wearing Uniform No. 24 for Kobe in Sixers' Win

Joel Embiid had to do it like the kids on the playground, a yell of "Kobe!" as he shot a fadeaway in the one-night-only No. 24 jersey he wore for his basketball idol.

Embiid buried the bucket to give him a tidy 24 points — and yes, eight defensive rebounds — in a somber night in Philly dedicated to Kobe Bryant.

Embiid returned early from a hand injury, in part to help the Sixers in their push for a better playoff seed in the East, but also because he wanted to honor Bryant. Embiid was a teen in Africa when he first got hooked on basketball watching Bryant in the 2010 NBA Finals. Bryant's style and swagger inspired the 7-foot Embiid to give up volleyball and convince his father he had a new direction in his promising athletic career. 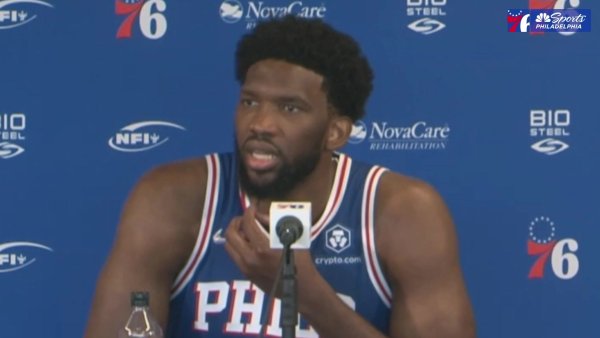 "That was the turning point in my life," Embiid said. "It was watching Kobe. After watching, I just wanted to be like him."

Wearing No. 24 in honor of Bryant, Embiid powered Philadelphia to a 115-104 win over the Golden State Warriors on Tuesday.

Embiid and the rest of the Sixers wore No. 24 and No. 8 Bryant jerseys in warmups in honor of the Los Angeles Lakers star, who was killed Sunday in a helicopter crash. Embiid was granted permission from Hall of Famer Bobby Jones to wear the retired No. 24 instead of his usual 21 for his first game since he tore a ligament in a finger in his left hand.

"It was tough but that's how you honor him, you go out there and you do your best," Embiid said. "You work hard and you play through stuff."

The Sixers went 6-3 without Embiid, the first Sixer to be voted to three straight All-Star Games since Allen Iverson.

Embiid had averaged 23.4 points and 12.3 rebounds in 31 games this season. Against the Warriors, Embiid played with a splint on his hand that didn't affect him when he buried a 3 that sent the Sixers into halftime with a 59-54 lead.

"For his first game back, it was pretty impressive," coach Brett Brown said.

Philadelphia's Ben Simmons had "Mamba Forever" and "RIP Gigi" (for Bryant's daughter, among the nine killed in the crash) on each sneaker and scored 17 points.

The Sixers were the latest team to honor Bryant in a pregame ceremony. Bryant led suburban Lower Merion High School to the Class AAAA state title at Hersheypark Arena in 1996, the school's first since 1943. His framed No. 33 Aces jersey was displayed at midcourt and the Sixers held a 33-second moment of silence of Bryant and the other eight victims in Sunday's crash. The Sixers rang a bell nine times and shone nine lights on the court during the solemn remembrance. The Sixers skipped pregame introductions for both teams and instead played a video of Bryant's last introduction in Philadelphia in a December 2015 game and images of him with Allen Iverson and Julius Erving.

Timeline: A Look Back at Kobe Bryant’s NBA Career

Yes, all teams have been affected by Bryant's death, but it struck particularly hard in Philly, where the former NBA star had a turbulent relationship with Philadelphia. His high school coach Gregg Downer spoke to the media for the first time earlier in the day, and wore Bryant's No. 33 Lower Merion warmup jacket.

"Once both teams got going, then it felt like a regular game again," Warriors coach Steve Kerr said. "But it took a little while."

The mood in the building also was tempered because the 10-win Warriors gave the Sixers a serious challenge. The Sixers were 12-point favorites but D'Angelo Russell, who scored a team-high 28 points, kept the Warriors within single digits for most of the fourth quarter.

Al Horford buried a 3 and Shake Milton followed with another to push it to a 16-point lead and send the Sixers on their way to a whopping 22-2 record at home.

The Sixers also had a No. 33 logo next to the scorer's table, the names of the nine victims were displayed on the big screen, and Zhaire Smith swapped his usual No. 8 jersey for No. 7. The Sixers had retired No. 24 for defensive star and 1983 NBA champion Bobby Jones. Embiid called Jones for his blessing to use 24 for the night. "I told Joel to play hard defense because that is what the No. 24 represents in my mind. I thanked him for the call, and I'm glad he and I had the chance to talk," Jones said in a statement.

Warriors: The Warriors practiced Monday night at Drexel, where guard Damion Lee played for three seasons. The Warriors also have former Villanova stars Omari Spellman and Eric Paschall on the roster. Both players won national championships under coach Jay Wright. Kerr joked he enjoyed practicing at Drexel but "maybe next year we'll go to Villanova, if Jay lets us."

76ers: Brown said he didn't address Bryant's death immediately before Tuesday's game. "I'm coming in tonight to win," Brown said. "I think that's probably the greatest tribute you can pay to such an amazing competitor. I'm going to coach with that spirit."

"This season has to stand for something. We're obviously not going to the playoffs. We're not fighting for championships or division titles. It has to be about a season-long improvement, individually for the young guys, and collectively for the group. We've had our slip-ups, we've had some nights where it's been very frustrating, but all in all, can't argue with the overall effort these guys have given all season long." - Kerr, on the 10-win Warriors.

Up Next for Both Teams

The Warriors play Thursday at Boston.

The 76ers play Thursday at Atlanta.