Rhys Hoskins and Bryce Harper combined for five RBIs as the rolling Phillies made it four straight wins in a 9-5 victory at Washington.

The Phillies are playing some of their best ball of the season at a very important time.

They made it four straight wins with a 9-5 victory over the Washington Nationals in the nation’s capital Wednesday night. 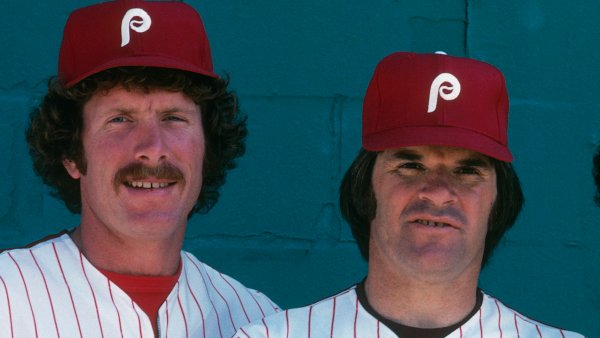 One day after swatting four home runs, the Phillies clubbed two more as they surged back from a three-run deficit to win handily.

The victory improved the Phillies to 55-53 as they continued to put pressure on the NL East-leading New York Mets ahead of the teams’ weekend showdown in Philadelphia.

First, the Phils must play one more game in Washington. They will look to sweep the four-game series and match a season-high with their fifth straight win Thursday. Aaron Nola will get the start.

Chase Anderson, keeping a spot in the rotation warm for injured Zach Eflin, gave up three solo homers the first time through the Nationals’ batting order and trailed, 3-0, after two innings.

The Phillies’ offense, which has produced 36 runs during this four-game winning streak, was undaunted by the deficit.

The Phils jumped Washington starter Paolo Espino for four runs in the third and two more in the fifth to take control of the game.

Anderson pitched just four innings. Matt Moore picked up the bulk of the work out of the bullpen. He pitched four innings of two-run ball and earned the win.

The Phils cranked out five hits, including four doubles, in the top of the third to take a 4-3 lead. Andrew Knapp, giving J.T. Realmuto a rest before Thursday afternoon’s game, led off the inning with a double. Anderson bunted and Travis Jankowski and Jean Segura both doubled home runs. Bryce Harper singled home a run and Rhys Hoskins capped the rally with an RBI double.

Hoskins had a big game. Harper singled with one out in the fifth and Hoskins followed with a long, two-run homer to left. He leads the team in homers (24) and RBIs (66).

The Phils extended their lead to 8-3 in the seventh. Hoskins was hit by a pitch from reliever Jefry Rodriguez. Didi Gregorius made Rodriguez pay with a two-run homer to right.

The Phils continued to pull away in the eighth as Harper had his second RBI double of the game. He has seven extra-base hits in the last four games. His three-hit night left him at .306 for the season. He is hitting .407 since the All-Star break.

Nola, who gets the ball in Thursday’s finale, is 6-7 with a 3.89 ERA in 22 career starts against the Nationals. However, he has not faced them this season, which is odd considering rotation mate Zack Wheeler has faced them five times in 2021. Nola has allowed just three runs in 14 2/3 innings over his last two starts. Can he push the winning streak to five?