The big bats in the middle of the Phillies’ order and one crucially important slide by Alec Bohm led the Phillies to a win in Sunday night’s exciting series finale in Atlanta.

With one out and Bohm on third base in the top of the ninth inning of a tie game, Didi Gregorius popped a ball up to shallow left field along the line. Marcell Ozuna camped under it and had momentum coming toward the plate. Phillies third base coach Dusty Wathan made an aggressive (ballsy?) call to send Bohm and Bohm was safe by a hair.

The ball beat Bohm to the plate but he slid just to the left of catcher Travis d’Arnaud’s tag and the Phillies won, 7-6. 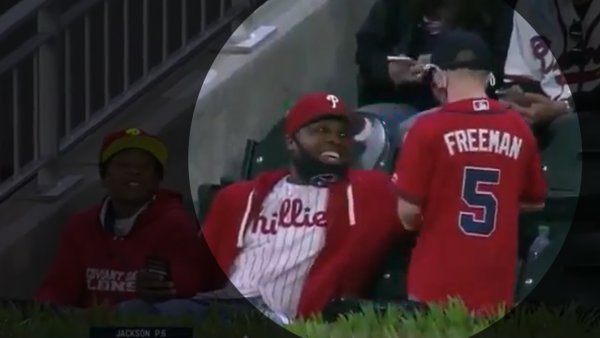 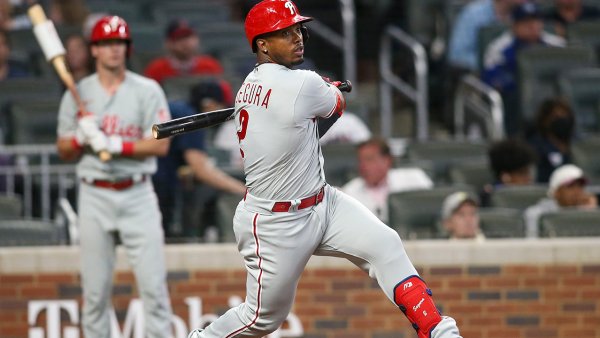 The play was under review for several minutes and the Braves were not happy with the result. Some classy fans threw trash onto the field.

Each Phillies hitter 2 through 7 was instrumental in this win. Rhys Hoskins homered, Bryce Harper hit his second longball in as many days, J.T. Realmuto manufactured a run by stealing third and scoring on a Jean Segura flyball, Bohm had that big double and slide in the ninth and Didi Gregorius hit a three-run shot and had the game-winning sac fly.

The Phillies avoided a sweep, which may have been as important psychologically as it was in the win-loss column. They just swept the Braves at home last weekend and did not want to see all of that positivity erased in the span of a week.

Through nine games, the Phillies are 6-3 with a four-game series on tap against the Mets at Citi Field.

Freeman wasn’t the star of this series, though. No, that was Ronald Acuña Jr., who dominated each game and was by far the best player on the field. Acuña was 9 for 13 in the series with two homers, three doubles, four RBI, four runs scored and two infield singles.

He set the tone in the series finale by legging out a routine groundball to shortstop and scoring on the next pitch when Ozzie Albies went deep.

Matt Moore encountered trouble in all five innings in his second start with the Phillies. He gave up three runs in the opening frame on Albies’ two-run shot and Dansby Swanson’s RBI single, then surrendered lone runs in the fourth and fifth innings after the Phillies had taken a two-run lead.

Moore has not pitched well in these first two starts. He’s put 17 men on base in 8⅓ innings.

The first two innings of his first start were promising as he pounded the Mets inside with fastballs and cutters. He has not been able to command pitches in that spot since and has paid the price.

Hoskins’ homer was important in getting the Phillies back in the game in an inning when they’d take the lead. He led off the fourth with a shot to left.

The most surprising stat of this young Phillies season is that Hoskins has not walked in 36 plate appearances. Hoskins, the guy who is routinely criticized around here for being too selective.

Harper has homered in consecutive games, reached base in all nine games and reached base multiple times in all but two.

It may not seem like Harper’s off to a hot start but he has a .447 OBP, as many walks as strikeouts and appears to be heating up in the power department.

The ESPN broadcast had a good note on Harper: His 21 home runs since 2018 on pitches 95 mph or faster lead the majors.

Brogdon is the real deal

Connor Brogdon becomes even more important without Bradley, and he had another uneventful, 1-2-3 inning against the Braves.

Archie Bradley was placed on the 10-day injured list Sunday with an oblique strain to his front side. He does not know how much time he'll miss.

In the first game without Bradley, manager Joe Girardi used Brogdon in the sixth inning, Sam Coonrod in the seventh, Jose Alvarado in the eighth and Hector Neris in the ninth.

It will be Chase Anderson and lefty David Peterson in Game 1. The Phillies hit Peterson hard at home last week.

Zack Wheeler will pitch Game 3 for the Phillies and Zach Eflin will pitch the series finale Thursday afternoon.

The Mets have not yet named starters for Wednesday and Thursday but Thursday would be Jacob deGrom’s day in the rotation. Marcus Stroman recorded one out Sunday before the Mets’ game was eventually rained out so he might start a game in this series after all.