ST. LOUIS - The Phillies' six-game winning streak came to an end under the weight of five home runs by the St. Louis Cardinals on Monday night.

Jeremy Hellickson surrendered three of them in a 10-3 loss at Busch Stadium.

The Phillies had a 3-0 lead in the third inning but could not protect it.

The loss dropped the Phils to 15-11 as they head into the second game of this 10-game trip on Tuesday night.

Starting pitching report
Hellickson pitched seven shutout innings against Washington in his previous start, but he could not sustain that success.

He let a 3-0 lead get away when he allowed a three-run homer to his counterpart, Adam Wainwright, with two outs in the fourth inning. Wainwright crushed a 3-1 pitch into the second deck in left.

Hellickson gave up back-to-back solo shots in the sixth.

Cardinals starter Wainwright gave up just three runs over six innings for his second win of the season. He helped himself with a three-run home run in the fourth inning.

Bullpen report
Brett Oberholtzer gave up four runs in 2 2/3 innings. He allowed back-to-back homers in the seventh. He has given up eight homers in 14 innings.

At the plate
The Phillies scored three times in the third inning to take a 3-0 lead. Freddy Galvis singled home two runs and Maikel Franco had a sacrifice fly.

Carlos Ruiz had three hits for the Phillies. 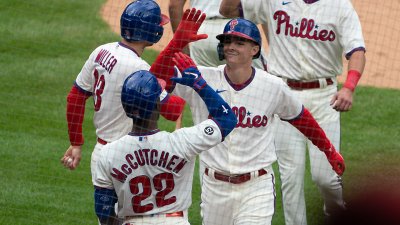 Cardinals pitcher Wainwright had his second straight three-RBI game. He had an RBI triple in his previous start.

The Cardinals out-hit the Phillies, 14-8.

Health check
A month into the season, Cody Asche remains in Clearwater, rehabbing an oblique injury. There is no timetable for his return to action.

Asche is swinging a bat but has not progressed to taking batting practice yet.

"With that type of injury, one swing can set you back a month," Mackanin said.

That has already happened once with Asche. He suffered the initial injury early in spring training and had a setback late in camp, so he and the club are being very cautious.

Up next
The series continues Tuesday night with Aaron Nola (1-2, 3.55) pitching against Cardinals right-hander Michael Wacha (2-1, 3.07).