"I'm a hustler not a Damn ball player. LMAO," he later posted on Instagram

50 Cent was on the mound, but not on the money.

The rap star was comically off target when he threw out the ceremonial first pitch Tuesday night before the Pittsburgh Pirates played the Mets at Citi Field.

Standing on the rubber 60 feet, 6 inches from home plate, 50 Cent wound up and launched a left-handed toss that sailed way wide of Mets catcher Anthony Recker. The ball bounced to the backstop and nearly nicked a photographer standing near the Mets' on-deck circle as 50 Cent and New York pitcher Jonathon Niese both smiled.

The ball "almost hit the camera man damn, if you look close you can see them moving the plate. Lol," 50 Cent later posted on Instagram.

"I'm a hustler not a Damn ball player. LMAO," he wrote.

Wearing a Mets jersey with No. 50 and the name Jackson on the back, 50 Cent, whose real name is Curtis Jackson III, held a bat as he posed for pictures with Curtis Granderson and other Mets on the field during batting practice.

50 Cent was born in South Jamaica and has a postgame concert at Citi Field scheduled for June 14. 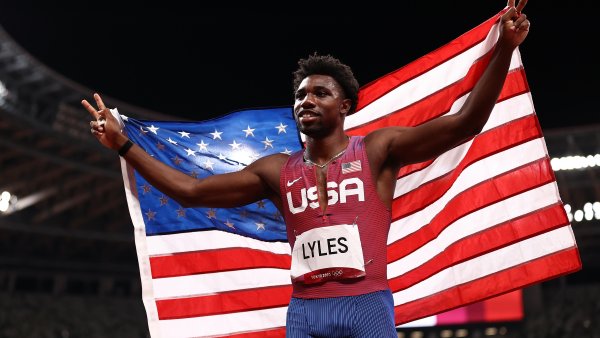 US Track Star Noah Lyles On Importance of Mental Health, Says He Has 2 Therapists

Gearing Up and Getting Fired Up at Eagles Training Camp