LAS VEGAS — Like a lot of trips to Vegas, the Eagles’ road trip in Week 7 ended with regret and shame.

The grades definitely reflect that:

It’s fair to say that Hurts was under duress for much of that game, but he just needs to play better. His accuracy issues are well-documented and they showed up in this game. He did some good things with his legs but that doesn’t make up for his completing 52.9% of his passes.

Sanders was off to a very good start before suffering an ankle injury that forced him out of the game. That’s a shame because the Eagles were finally starting to use him. In his absence, Boston Scott got 7 carries for 24 yards and Kenny Gainwell had 5 for 20. Gainwell caught a 15-yard touchdown but also fumbled the ball away. 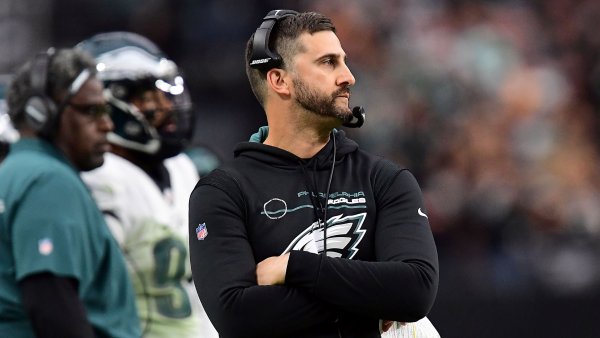 Smith had five catches on nine targets; the rookie had an up-and-down day. Jalen Reagor caught a touchdown late and it would be nice to see him contribute when it’s not garbage time. Quez Watkins had 2 for 37.

Big day for Goedert in his first opportunity to be the true No. 1 tight end. (Zach Ertz had himself a nice debut in Arizona too.) Goedert was targeted five times but it’s clear he needs to be a huge part of this offense.

Hurts was sacked just twice but that’s not indicative of their play, especially on the edges. Maxx Crosby and Yannick Ngakoue are very good players but they were beating Jordan Mailata and Lane Johnson all night. Mailata limped off the field late in the game, which might explain his struggles. Sunday was about as bad as we’ve seen him play. And Landon Dickerson was called for a very costly false start that helped kill a drive.

The Eagles’ defensive line is supposed to be the strength of the team and they were facing a banged up Raiders offense line. And they didn’t get a single sack and got just two QB hits. Sure, Derek Carr was getting the ball out quickly but they still didn’t find ways to make plays. And they were horrible in the run too.

The Eagles’ linebackers are standing out every week for the absolute wrong reasons. This unit simply isn’t good enough and that’s unlikely to change. Singleton had nine tackles but missed a few too. Davion Taylor is getting more playing time but he had a rough game. The problem here is there are no easy answers.

Carr completed 31 of 34 passes, which might make you think the secondary played really poorly. But they were playing the way the scheme wants them to. And there was some good. Darius Slay played Henry Ruggs III really tough. And Maddox continues to have a very good season; his pick in the red zone was huge.

The Eagles would have gotten a very good grade if they were able to get that onside kick to start the second half. The design was pretty good but those plays are tough in the modern NFL. Siposs had a nice afternoon; his punt inside the 20 pinned the Raiders at their own 4-yard line. Jalen Reagor had one punt return for 6 yards but had kick returns of 26 and 23 yards.

The Eagles narrowly avoid an F here because Nick Sirianni came out and tried to run the ball on Sunday, which is encouraging. But coaching also includes Jonathan Gannon, whose defense is just way too passive. The Eagles have a lack of talent, but it’s up to these coaches to get the most out of their guys and they aren’t.