Now Picking at No. 12, Who Might the Eagles Pick in the NFL Draft?

The mock drafters don't have a consensus right now on which rookie might be available to the Philadelphia Eagles with the No. 12 pick in the NFL Draft

Who's the new favorite now that Eagles have the 12th pick? originally appeared on NBC Sports Philadelphia

All those mock drafts you spent the last couple months reading? Forget about ‘em.

The Eagles traded down from 6 to 12 on Friday so it’s like the mock draft season is beginning anew for Eagles fans. 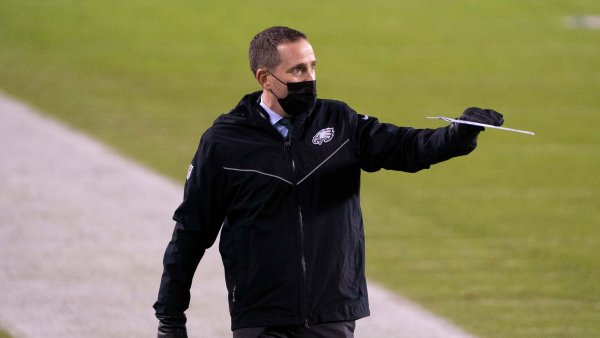 Eagles Mailbag: Did Eagles Get Enough to Trade Down?

With that in mind, let’s go through another NFL mock draft roundup with the Eagles at No. 12.

What they said: The Eagles trade out of 6 and down six spots and still get one of the top skill guys in the draft in Waddle, who averaged 21.1 yards on 28 catches in just six games last year. Waddle missed the season with a broken ankle but returned for the BCS Championship Game against Ohio State and is totally healthy now. The Eagles haven’t really nailed a WR pick since Maclin 12 years ago, but Waddle sure looks like a can’t-miss.

What they said: Philadelphia considers a quarterback with this pick. Ultimately they decide to add more weapons to further the development of Jalen Hurts. They select Hurts’ former teammate, Jaylen Waddle. Waddle brings the type of dynamic threat Philadelphia has not seen since DeSean Jackson was healthy.

My take: Again, Waddle is the third receiver off the board. If the Eagles thought Ja’Marr Chase would be gone by six, then this trade down basically allows them to pick Waddle at 12 instead of DeVonta Smith at 6. It’s not a crazy thought that Waddle could end up being a better pro. But even if he isn’t, the Eagles are probably looking at it like Waddle + a 2022 first-round pick is a better haul.

What they said: Philadelphia moves back after trading with the Dolphins and still gets one of the top wide receivers in the draft.

My take: This mock is interesting because the Eagles have their choice of Waddle or Smith and take Waddle. Smith doesn’t go until pick No. 17 to the Raiders … as a replacement for Nelson Agholor perhaps?!?

What they said: Horn's combination of athleticism and physicality is rare for the cornerback position. He allowed just eight catches on 24 targets for 116 yards in the seven games he played in 2020.

My take: If Waddle is the favorite pick right now, then Horn is the second. The son of former NFL receiver Joe Horn is a clear-cut first-round pick and has seen his stock rise recently after an impressive pro day last week at South Carolina. He’s widely considered to be one of the top three corners in this draft, along with Patrick Surtain II and Caleb Farley. Any three of those would be a decent pick.

What they said: The Eagles could pick one of the Alabama receivers here but Horn's outstanding pro day and game tape may force their hand. Philly needs his size, speed and tenacious attitude on the outside in a bad way.

My take: Like Reuter mentioned, he has Smith and Waddle available for the Eagles, who instead go with Horn. In this mock, Horn is the second CB off the board after the Cowboys take Surtain at No. 10. He’d be a good fit.

What they said: A polished Crimson Tide bookend for Darius Slay. Because somebody has to cover Kenny Golladay, right?

My take: Horn has been a hot name recently, but Surtain is still considered by many to be the top corner in this class. And in this mock draft, the Eagles have their pick of all the corners at No. 12. This would be a fine pick as well.

What they said: Trading out of the sixth pick might limit the Eagles’ options for finding presumptive starting quarterback Jalen Hurts a true No. 1 overall wide receiver but general manager Howie Roseman’s gamble pays off with the defending Heisman Trophy winner, Smith, still on the board. An elite route-runner with sticky hands and graduate-level understanding of defenses, Smith would be an ideal complement to last year’s speedy top pick, Jalen Reagor.

My take: This mock has the Lions’ opting for Waddle over Smith at No. 7, which allows the Heisman Trophy winner to fall to the Eagles at No. 12. This would be a pretty popular pick among fans and it’s not outrageous to think that Smith slips a little bit. And in this mock, the top two corners — Surtain and Horn — are already off the board. If that happens, then there’s a real chance Smith slides and would be the Eagles’ pick.

What they said: The Eagles aren’t completely sold on Jalen Hurts at quarterback. If Fields slips a bit, he might be too tempting.

My take: This one is hard to believe. You’d think if the Eagles take a quarterback it’s because they’re in love with that quarterback. And if the Eagles were in love with Fields, then why wouldn’t they stay at No. 6 and give themselves the best chance to draft him? I think the Eagles look at the QB position differently than other positions. They can drop six spots and be happy to take one of several players on their board but it doesn’t feel like QB is included in that. If they want a QB, they get the QB. The opportunistically taking one idea doesn’t fit for me.

What they said: The Eagles appear to be moving forward with Jalen Hurts and if that's the plan they have to surround him with playmakers. There's none better than Kyle Pitts, who only falls this far because of the run on QBs, WRs and O-linemen.

My take: Could Pitts really end up in the Eagles’ lap at 12? It seems too good to be true. For weeks we talked about the possibility of the Eagles’ taking Pitts with the No. 6 pick so for them to move down six spots, pick up a 2022 first-rounder and still get the tight end NFL Network’s Daniel Jeremiah said might be the best PLAYER in the draft would be wild. I just can’t see it happening. I don’t think he’d get past the two division teams (Cowboys and Giants) right in front of the Eagles.

What they said: The Eagles moved down from pick No. 6 because they are rebuilding, and seemingly have their sights set on a prospect other teams don’t view as a top-10 talent. Collins is the type of talent and leader that can help a defense tighten up immediately.

My take: This would be pretty surprising, especially because Kelly doesn’t have Penn State’s Micah Parsons going until pick No. 19 to Washington. Collins is a really intriguing prospect but 12 might be too early for him and the Eagles might have more attractive options at 12. If you’re wondering what the South Florida paper has the Dolphins doing at six: Ja’Marr Chase.