These Are the Eagles' All-Time Biggest Free Agent Bargains

NBC Sports Philadelphia usually focuses our attention this time of year on all the blockbuster free agents the Eagles sign.

But for every free agent who gets a massive contract, there are a bunch of low-profile free agents who aren’t in demand, coming off serious injuries or  disappointing seasons or just fell through the cracks as teams spent all their money in the early days of free agency. 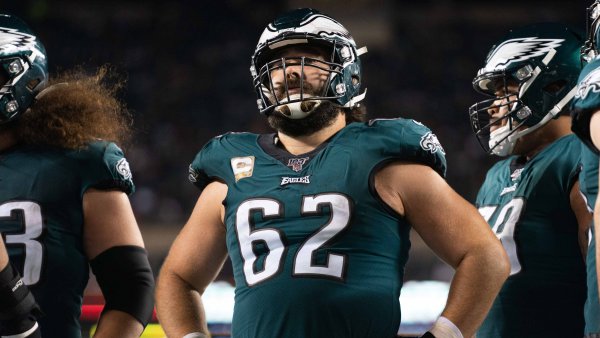 How Much Cap Space Did Eagles Save by Restructuring Jason Kelce's Deal?

Sometimes, the signings we don’t make a big deal about wind up being some of the best ones.

IRVING FRYAR: The Mount Holly native was about to turn 34 when the Eagles signed him before the 1995 season, so conventional wisdom said his best years were behind him. The Eagles signed Fryar to a three-year, $4.5 million contract that made him somewhere around the 25th-highest-paid receiver in the league. But he proceeded to catch 174 passes for 2,511 yards and 17 TDs the next two years, making the Pro Bowl both years. Fryar and Cris Carter are the only WRs in NFL history with consecutive 1,150-yard seasons after turning 34.

CARLOS EMMONS: When the Eagles signed Emmons before the 2000 season, his four-year, $7.4 million contract didn’t put him among the top half of starting linebackers in the league. But Emmons became one of the most consistent members of the Jim Johnson defense during his four years here.

JUQUA THOMAS: With a bunch of defensive ends injured during the summer of 2005, the Eagles signed Thomas in training camp to a veteran minimum contract worth $585,000. Thomas only had 5 sacks in his first four NFL seasons so the move barely caused a ripple. But he wound up recording 31 ½ sacks in seven years here. Along with Reggie White, Clyde Simmons and Trent Cole, he’s one of four Eagles in history with 5.0 sacks in five straight seasons. He eventually signed a long-term deal, but the Eagles got him literally for minimum wage.

JEFF GARCIA: The three-time Pro Bowler was coming off three straight losing seasons – he was 9-21 from 2003 through 2005 with the 49ers, Browns and Lions – and at 36 he had very little negotiating leverage. The Eagles signed Garcia in 2006 to a one-year, $1.3 million contract that made him one of the lowest-paid QBs in the NFL. All Garcia did when Donovan McNabb got hurt was win five straight games, throw 10 TDs and 2 INTs, lead the Eagles to the playoffs, beat the Giants in a wild-card game and nearly beat the Saints in the Superdome.

EVAN MATHIS: The least heralded of the 2011 Dream Team free agency blitz, Mathis wound up being the only one who had success here. The Eagles signed Mathis to a one-year, $735,000, almost-minimum-wage deal that summer and after bouncing around the league for years as a backup, he immediately reinvented himself as a stud left guard. He made two Pro Bowls and a 1st-team all-pro in his four years with the Eagles and eventually signed a $25 million extension.

NICK FOLES: When the Eagles re-signed Foles before the 2017 season he was a journeyman, changing teams for the third straight offseason, four years removed from his huge 2013 season. His two-year, $11 million deal made him one of the higher-paid backups in the league but still paid him less than people like Mike Glennon, Tyrod Taylor and Sam Bradford. What did the Eagles get for that $11 million? Only a Super Bowl championship. And the 29th-highest-paid QB in the league was the Super Bowl MVP.

MALCOLM JENKINS: Jenkins wasn’t exactly cheap – his original deal was three years, $15.51 million. But that $5.17 million average made him the 19th-highest-paid safety in the league and turned out to be an incredible bargain. Jenkins was cheaper than other free agent safeties on the market that spring of 2014 - Jairus Byrd ($9 million a year), Donte Whitner ($7 million a year) and T.J. Ward ($5.6 million a year). Of course, Jenkins wound up outplaying all of them, earning three Pro Bowl nods during his six years in Philly and winning a Super Bowl.

PATRICK ROBINSON: P-Rob had three INTs over the last four seasons, was looking for his fourth team in four years and was about to turn 30, and the Eagles were able to sign him for the veteran minimum of $775,000. Once Robinson found a home in the slot, he was terrific during the 2017 Super Bowl season, picking off four passes, plus the pivotal 50-yard pick-6 off Case Keenum in the NFC Championship Game. He was the 109th-highest-paid CB in the NFL.

CHRIS LONG: The same day the Eagles signed Robinson, they signed Long to a one-year, $2.25 million deal, a far cry from the nearly $35 million he had made the previous ƒour years. Long was 32, had just eight sacks the last three years and the Eagles got him cheap. Long wound up playing lights out for the Super Bowl team and also in 2018, finishing his career with 11 ½ sacks in his last two seasons even though he wasn’t one of the top-50 highest-paid edge rushers in the league.

LEGARRETTE BLOUNT: One more from the remarkable 2017 free agency class. Robinson, Long and Blount were all in their 30s, they were all inexpensive and they all made huge contributions to the Super Bowl run. The Eagles signed Blount to a one-year deal worth $1.25 million, which made him the 47th-highest-paid RB in the league. In his only season with the Eagles, Blount ran for 766 yards with a 4.4 average during the regular season, then had a huge Super Bowl, with 14-for-90 rushing and a 21-yard TD in the second quarter.