A word so polarizing among sports fans nowadays, you half-expect to see it on a little red, white and blue sign on a neighbor’s lawn this time of year.

When Brett Brown was fired as Sixers head coach in late August, general manager Elton Brand told the media and the fans that he would take a look at the front office from the top to bottom, aiming at “balancing our strengths and analytics and basketball strategy with more basketball minds.” 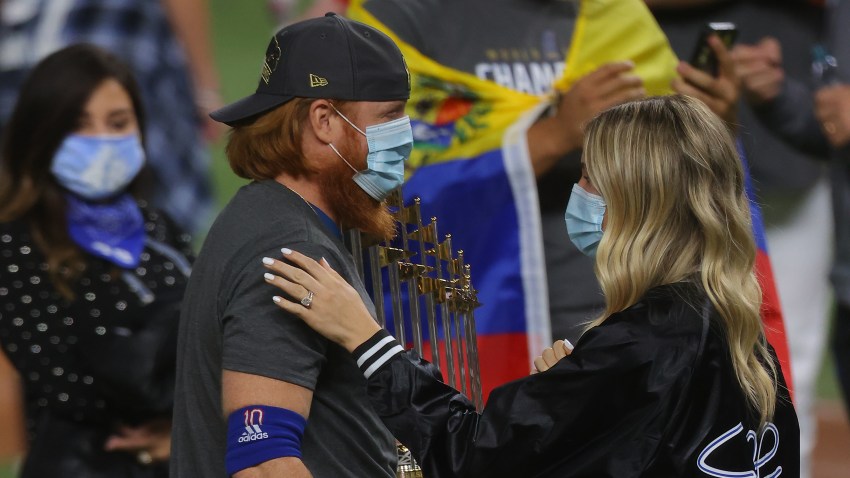 MLB Says Turner Violated Protocols When He Returned to Field

They took care of the analytics part on Wednesday as the Sixers are expected to hire former Houston Rockets GM Daryl Morey to be the team’s new head of basketball operations, sources confirmed to NBC Sports Philadelphia's John Clark.

Most NBA fans know Morey as one of the stalwarts of the league’s analytics movement. He spent 13 seasons running the Rockets and wasn’t afraid to make unpopular moves to improve the team’s chances, on paper, of winning more games.

During Morey’s early years in Houston, he worked alongside a man who at the time was the youngest vice president in the NBA. This man was also among the early adopters of the analytics movement and worked in lockstep with Morey to try to build Houston into a perennial winner.

That man was Sam Hinkie.

The same Hinkie that turned the Sixers into a global laughingstock for a half-decade, accumulating losses at a far greater rate than he selected top-10 draft picks that became franchise cornerstones.

Hinkie is not Morey, that’s for certain. Morey built up his stockpile of assets without tanking even once. And we will likely never know how Hinkie would run a team that won more games than it lost. He resigned well before his plans bore any fruit.

But Morey and Hinkie both worship at the same altar: one that values statistics above all. What you see when you watch the players pretty much doesn’t matter. Positions don’t matter. The fact that the game changes dramatically in the fourth quarter, and in the course of the postseason, none of that matters.

We’ve been through this before and I don’t want to do it again.

To be fair, Morey made the Rockets stronger after Hinkie left. He made an absolute steal of a trade just months after Hinkie was hired by the Sixers. Eight years ago yesterday, Morey acquired James Harden from the Thunder for two first-round picks, a second-round pick, Kevin Martin and Jeremy Lamb.

That move instantly made the Rockets among the top teams in a stacked Western Conference. But for all of Houston’s regular-season success during the Morey era — 10 playoff appearances and five seasons with 53-plus wins — where was that success in the postseason?

The Rockets made it as far as the conference finals just twice, despite having the second-best record in the league over Morey’s tenure. All the while, Morey flipped the roster at a rate that was only topped by Hinkie in his prime.

Much like Hinkie, Morey made trades that were winners and trades that were head-spinners. Acquiring Kyle Lowry in 2009 was the stuff of legend. Trading him three years later for Gary Forbes and a protected one is equally so, for the wrong reasons. Lowry has since helped the Raptors win an NBA title and made six straight All-Star Games.

The Harden move was a master stroke, but the moves since to acquire a second star to pair with Harden have been lateral moves at best. Chris Paul made the Rockets a very good offense, but at what cost? Do you think the Rockets miss key role players Lou Williams, Montrezl Harrell and Patrick Beverley?

Morey traded Paul for Russell Westbrook last summer, along with a very anti-Process truckload of outgoing first-round draft picks: 2024 and 2026, plus the right to swap first-rounders in 2021 and 2025. The Rockets were bounced by the Lakers in five in the conference semis.

Think about this: If the Sixers have a great season and you want to “run it back,” there’s virtually no chance with Morey pulling the strings. If you buy a Sixers jersey with a player’s name and number on it, wear it while you can. It will more than likely be outdated by the end of next summer.

Joel Embiid is a beloved player in this city. But what if his true shooting percentage dips next season? What if Morey thinks that Ben Simmons’ aversion to shooting threes overshadows everything else he brings to the table?

The Sixers are very close to being championship contenders. They may be as soon as this coming season. It may just be a case of the team’s stars taking a step forward. Sixers fans can only hope that when, not if, Morey gets an itchy trigger finger, he doesn’t send the team back into a Process.