This time, Wentz has been placed on the Colts' COVID-19 list - on the day he was expected to return to full practice with Indy.

Being placed on the COVID-19 list does not immediately indicate a player has tested positive. Players can also be placed on the list while contact tracing is ongoing, after close contact with an infected individual.

Wentz declined last month to answer whether he's received a COVID-19 vaccine, but he has been wearing a mask at the team facility throughout training camp, which is required only for unvaccinated players. 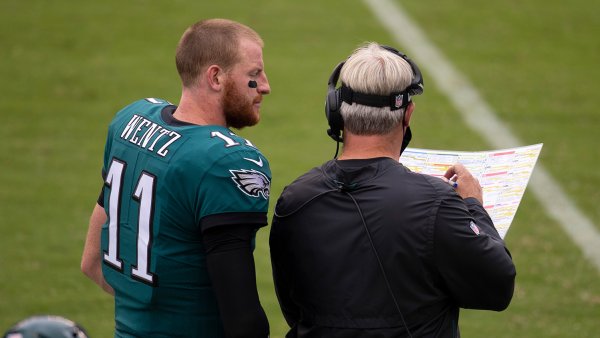 Colts' Carson Wentz Won't Say If He Got Vaccine. Why It Matters to Eagles

If Wentz is unvaccinated and has tested positive, he will have to isolate away from the team for 10 days. Unvaccinated players who have close contact with an infected individual have to quarantine for five days.

In any case, the fact that Wentz was expected to return to practice in full capacity on Monday with 13 days before the Colts' Week 1 opener against the Seattle Seahawks, and now will not be able to do that until next week, is less than ideal.

Wentz was already pushing it to return by Week 1, though it seemed before Monday that he was on track to be Indy's Week 1 starter. Monday, then, is a setback and could theoretically make Colts head coach Frank Reich re-consider rushing Wentz out there in Week 1 without much in the way of full speed preparation during training camp and the preseason.

The Colts play the Los Angeles Rams in Week 2 followed by the Tennessee Titans and Miami Dolphins.

As a refresher, the Eagles received a 2022 conditional second-round pick in the Wentz trade from Indy, with two conditions that can turn it into a first-round pick:

If Wentz misses Week 1, that's 5.8% of the season gone. The snaps aren't always equitable week to week, but lopping off roughly five percent of the year's snaps is not a good way to start.

Here's hoping Wentz is healthy soon - both for his and his family's sake, and also for the Eagles' sake.