He’s one of the worst quarterbacks in the NFL.

And this is a monumental problem for a team that’s based its entire future on the second pick in the 2016 draft.

Carson Wentz’s shocking regression has left the Eagles 0-2 and left everybody who’s watched these two games wondering what the heck happened to No. 11.

And is it fixable?

That may seem like an extreme question after just two games, but this is a guy who was on track to be the league MVP when he got hurt three years ago and has a losing record since. 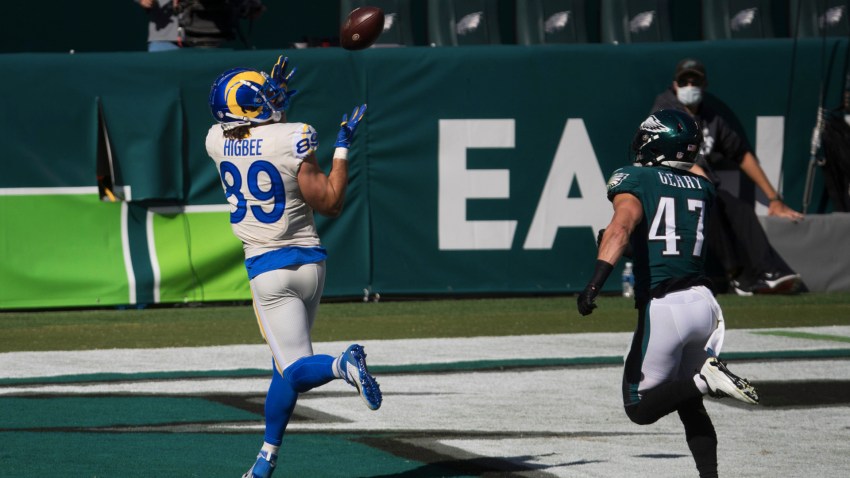 Who Gets an F? More Poor Marks After Eagles' Ugly Loss to Rams

And he’s out there looking like Bobby Hoying two weeks into the season.

The regression is scary. And so is the Eagles’ inability so far to stop it.

The scariest thing is that Wentz is making rookie mistakes five years into his career. He did it in the opener against Washington and he did it again Sunday, and these are mistakes that you just don’t see from a fifth-year player.

The Eagles were close to full strength against the Rams Sunday at the Linc, Wentz had all his favorite receivers healthy and available, the offensive line played pretty well and Doug Pederson did a better job mixing in the running game.

And still. Decisions that you just can’t believe. Mistakes that just can’t happen.

This is something we’ve just never seen from Wentz. That’s why this is so alarming.

Oh, there were occasional bad throws or bad decisions in the past. Bad games. But this is a guy who came into this year with the 2nd-best interception ratio in NFL history, behind only Aaron Rodgers.

He’s made about half a season’s worth of baffling mistakes in the last eight days. And honestly, other than the first couple drives in Washington, he’s been mediocre at best other than the interceptions.

Since the Eagles took a 17-0 lead in Washington, Wentz has thrown no TD passes and four interceptions.

Which is going to take a lot of work, because Wentz is a mess right now. When a quarterback starts making mistakes in Year 5 that he’s never made before, it’s not an easy fix.

And Doug Pederson has made it very clear that the problems are mental:

After the Washington game: “We want to be smart.”

After the Rams game: “If plays are not there, don’t try to make something happen. Just throw the ball away or run.”

This is a head coach placing the blame squarely on the quarterback’s shoulders and conceding that he’s playing stupid football.

As for Wentz, he just keeps repeating the same things about how he he has to be better and he’s going to be better.

After the Rams’ 37-19 destruction of the Eagles Sunday, Wentz said this: “We have the potential with the pieces we have on offense to be great,  to be elite.”

With each passing game, the uncertainty just grows whether Wentz is one of those pieces.