Carson Wentz is playing more like his favorite player this season.

Wentz, who grew up rooting for Brett Favre, has turned into a younger version of the Ol’ Gunslinger in his fifth year with the Philadelphia Eagles.

Just like Favre was in his two decades with the Packers, Jets and Vikings, Wentz is supremely confident in his ability to make any throw from anywhere on the field. That can be risky but the reward can be even greater.

Wentz made an exceptional 18-yard TD pass to Boston Scott with 40 seconds left in the game to lift the Eagles to a 22-21 win over the Giants last Thursday. It was the fifth time Wentz has engineered a comeback win in the fourth quarter in the past 11 games.

Earlier in that game, however, Wentz threw his 10th interception of the season into double coverage in the end zone from the New York 20. That was one he needed to throw away.

He also made a cross-body, cross-field pass to Travis Fulgham that every coach tells his quarterback never to make. A defender was there, but the ball hit Fulgham’s hands and he dropped it.

Wentz has 10 touchdown passes to go with those picks and he’s also run for a career-high five TDs.

“That was always the thing with Brett, the reward was definitely greater, but you knew there was going to be some risk involved,” said Eagles coach Doug Pederson, who played several seasons with Favre in Green Bay.

“Carson obviously has the ability to do that. He’s got the arm strength, the mobility to extend plays with his legs. I would think the one thing that we’re seeing with Carson now, the same thing I saw with Brett, is that physical toughness, being able to stand in the pocket, take some hits, bounce up, and do it again. To me, that’s kind of some of the similarities there.

“Carson is solid. He’s getting better every week. Again, had a great comeback (against the Giants) for us. That’s some of the same things that obviously I saw in Brett when I played with him.”

Favre was a three-time NFL MVP and won a Super Bowl on his way into the Hall of Fame. He also threw more interceptions than any player in league history.

Wentz hasn’t always been reckless with the ball. He threw only seven picks in each of the past three seasons. He finished third in NFL MVP voting in his second year when the Eagles won the Super Bowl with backup Nick Foles after Wentz was injured.

Wentz became the first quarterback in NFL history to throw for 4,000 yards without a wide receiver having 500 yards receiving last year. He also is the only quarterback to throw 20 or more touchdowns and seven or fewer interceptions in three straight seasons. Tom Brady, Drew Brees, Aaron Rodgers and Russell Wilson have done it twice.

Entering this season, Wentz had the second-best interception ratio in league history behind only Rodgers. 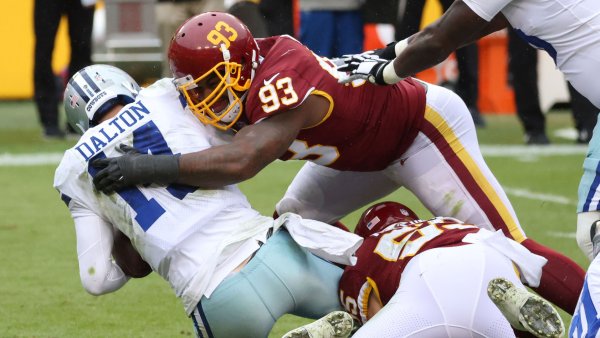 What the Cowboys' Loss Means for the 1st-Place Eagles 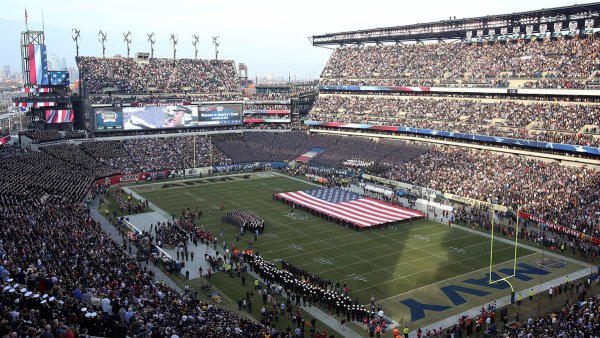 2020 Army-Navy Game Will Happen in West Point, Not Philly

“Mistakes are going to happen,” Wentz said. “Guys are going to drop passes, I’m going to throw interceptions. (The offensive line) is going to make mistakes up front, too.”

All the above have happened quite often this season. The Eagles have been decimated by injuries. They have started 21 different players on offense, including 10 on the offensive line and seven guys who made their first career starts. Wentz’s past eight TD passes have been thrown to practice squad alums.

Wentz already has been sacked 28 times, nine fewer than his career high last season. He’s taken numerous hits and has even chosen to take on defenders by lowering his shoulder on scrambles and blocking down the field on runs when Jalen Hurts takes the snap and he’s lined up as a receiver.

“He’s a competitor. He’s a hard worker. He loves the game of football,” Ravens defensive end Calais Campbell said on the AP Pro Football Podcast, four days after Wentz led the Eagles to 22 points in the fourth quarter of a 30-28 loss to Baltimore. “We were tagging him, we’re hitting him early and often. He just kept getting up and making plays. ... He has a lot of fight. You saw a guy who was determined to try to find a way to win a game. And it took everything we had to fight them off and win late.”

Despite intense criticism from some fans who wanted the Eagles to keep Foles instead, Wentz has the trust of his teammates.

“He is as talented as the best of them,” Eagles safety Rodney McLeod said Wentz. “I believe in (No.) 11.”