Andrew McCutchen, Phillies Come Back From 6 Down to Sweep Nationals

Phillies refuse to die, come back from 6 down for sweep and 6th straight win originally appeared on NBC Sports Philadelphia

On a day when Aaron Nola’s September struggles stretched into a new season, the Phillies rallied from six runs down to beat the Washington Nationals, 7-6, on Thursday afternoon.

The win was the Phillies’ sixth straight and it gave them a sweep of the Nationals.

Twenty-nine games remain in the season.

This was one of the Phillies’ best wins of the season because they trailed 6-0 after five innings. Andrew McCutchen keyed the comeback with a three-run double in the sixth inning and an RBI single in the eighth.

The Phils ended up scoring four times in the eighth inning to take the lead.

Poor defense has hurt the Phillies all season. This time, an opposing team’s poor defense helped the Phillies. Nationals second baseman Luis Garcia failed to turn two potential inning-ending double plays that resulted in the Phillies’ scoring three runs in the eighth, including the tying and go-ahead runs.

Archie Bradley protected the one-run lead with scoreless work in the bottom of the eighth.

Ian Kennedy survived a one-out double in the ninth for the save. 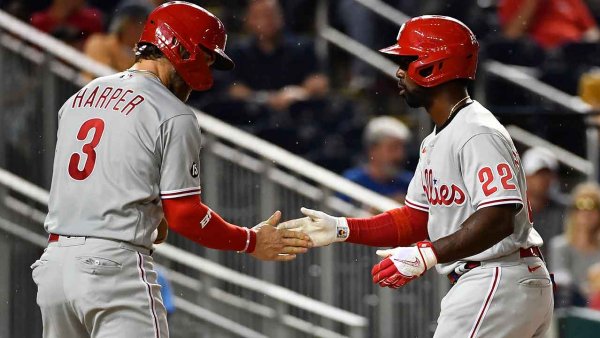 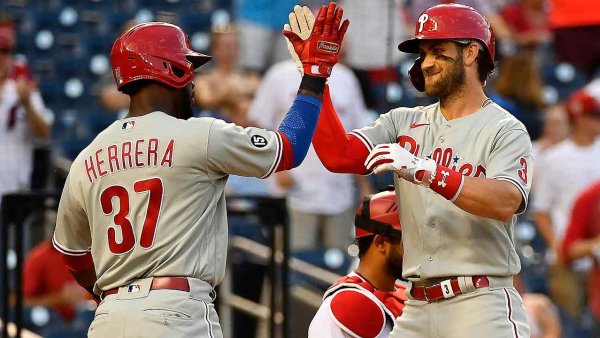 The Phillies have scored at least seven runs in seven straight games for the first time since 1933.

While McCutchen drove in four runs, Odubel Herrera had three hits and beat out a potential double-play ball in the eighth to allow the go-ahead run to score. Garcia had trouble getting a handle on the ball and Herrera capitalized.

J.T. Realmuto returned to the lineup after missing the first two games of the series with a banged-up left ankle. He started the decisive eighth-inning rally with a double.

The Phillies did little in the early innings against Washington starter Paolo Espino. He opened the day with five scoreless innings before the Phils’ bats came alive. The Phils feasted on the Nationals’ bullpen the entire series.

Despite the win, there was a troubling element to the day. Nola has been inconsistent all season and his struggles continued as he failed to get an out in the fifth inning while giving up six runs on the day. He gave up a solo homer and a two-run homer, both with two outs in the third inning, then loaded the bases with no outs in the fifth and watched from the dugout as all three runs scored with Bailey Falter on the mound.

This was not how Nola wanted to start the month that has given him so much trouble the last two seasons. In 12 September starts since 2019, he has an ERA of 5.37.

Nola figures to have five more chances this month to impact the playoff race. His team needs him in a big way. But he hasn’t inspired much confidence in recent Septembers.

The Phils play their next three in Miami.

The Braves, who lead the division, open a four-game series at Colorado on Thursday night. The Phillies will be watching that one closely to see if they can cut the deficit to a game.