‘It Lost Us the Game': Bohm's Defense Costs Phils Again in Loss to Rangers

After a few solid weeks at 3B, Bohm's defense costs Phillies again in loss originally appeared on NBC Sports Philadelphia

Alec Bohm continues to hit, but on Tuesday his defense cost the Phillies dearly in a 6-4 loss to the visiting Texas Rangers.

Bohm, who had converted 41 consecutive defensive chances since his three-error game against the Mets on April 11, failed to make two plays in the Rangers' decisive three-run sixth inning. The first was ruled an error, the second an infield single. He was indecisive on the first and double-clutched both, resulting in both runners barely crossing first base safely.

"You see the score. It lost us the game," Bohm said afterward.

Seranthony Dominguez relieved Ranger Suarez in that sixth inning and was on his way to escaping the jam with the game tied but allowed a two-out, two-run double to pinch-hitter Zach Reks. Another run scored when Bohm couldn't fire to first base on Marcus Semien's soft ground ball. All three were unearned.

Any loss hurts but this was a tough one. The Rangers entered the night six games under .500 and lost more than 70 percent of their road games a season ago. They also got just three innings out of their starting pitcher and gifted the Phillies two early runs when Nick Solak misplayed a ball from Rhys Hoskins that went for a double in the first inning en route to an early Phils lead. 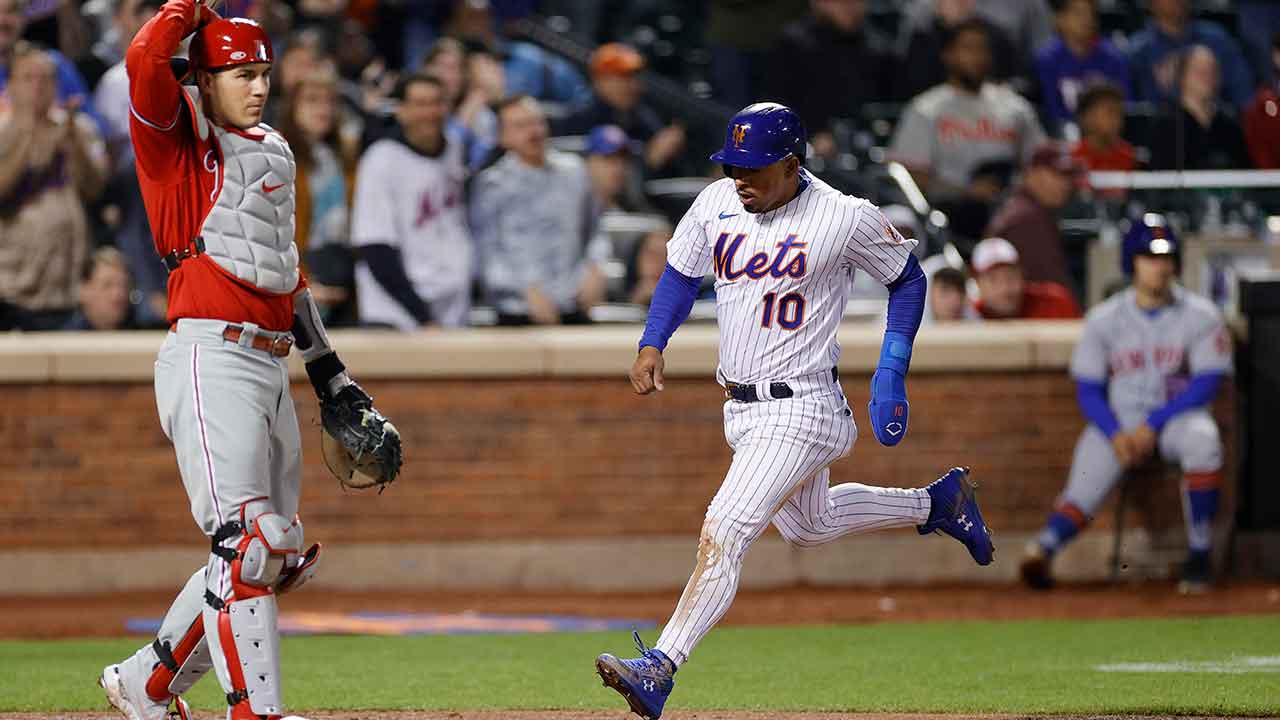 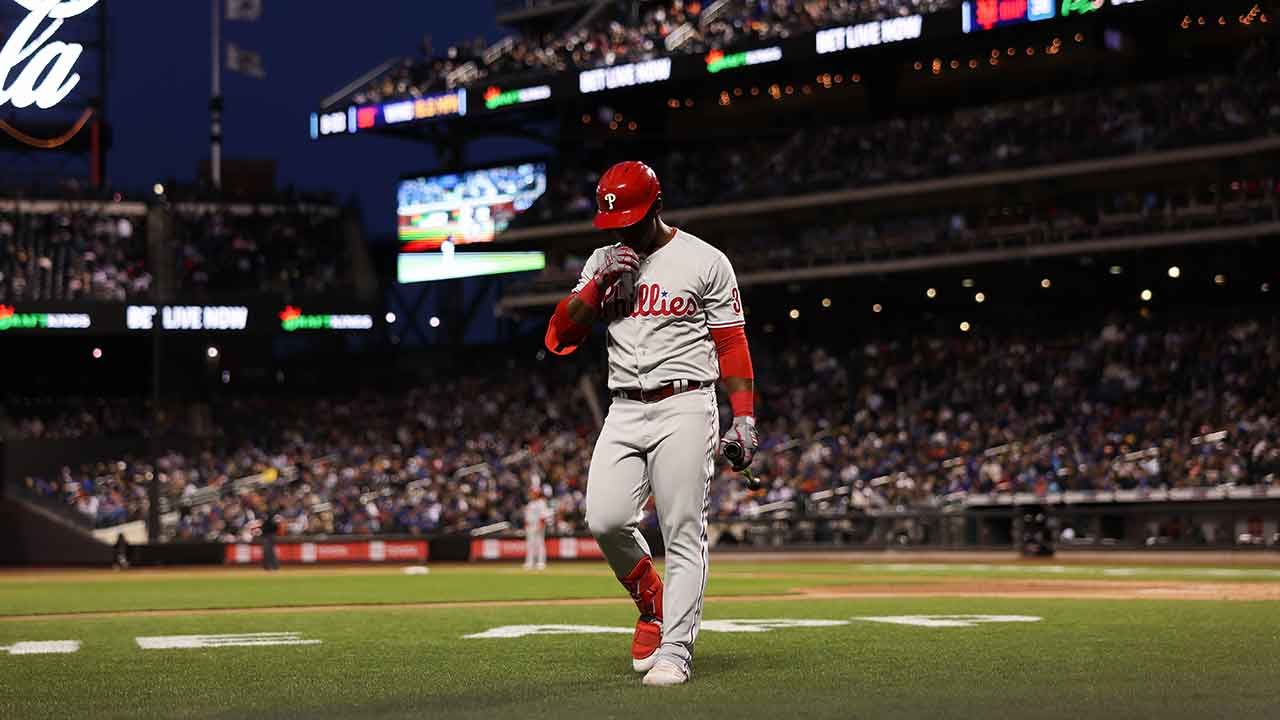 Bohm has hit since opening day and bounced back defensively after that nightmarish game three weeks ago. Could that experience make this one easier to move past?

"Tonight's tough, it hurts. Sun's gonna come up tomorrow," he said. "I've got to find a way to get over it before 6:45 tomorrow, come back and play another game.”

The Phillies had their chance in the seventh inning with runners on second and third and nobody out, down three runs. Kyle Schwarber popped out behind second base, then Bohm and Bryce Harper struck out to quell the threat.

J.T. Realmuto's solo homer in the eighth inning brought the Phils closer but that's where the scoring stopped.

Given the difficulty of the Phillies' May schedule -- their next 33 games after the Rangers come against teams with a combined record of 115-76 -- they needed to clean up on lowly Texas this week.

Suarez has had to work much harder in his starts this season. After averaging 15.5 pitches per inning as a starter in 2021, he's up to 18.0 per inning this season.

Suarez was beaten by the long ball Tuesday, allowing a two-out, two-run homer to Mitch Garver in the first inning and a solo shot to Jonah Heim in the fourth. He cruised in between those two bombs but caught too much plate with off-speed pitches to Garver and Heim.

"When he made mistakes, they were big mistakes," manager Joe Girardi said.

Suarez did work himself out of a tight spot in the fifth inning, putting the first two men on base and loading the bases with two outs. He got out of it with a Garver flyout.

Girardi sent Suarez back out for the sixth inning at 86 pitches and the lefty allowed a single to Heim before Bohm's error on a groundball off the bat of left-handed-hitting Nathaniel Lowe. That ended the night for Suarez, who has a 4.63 ERA and 1.63 WHIP through five starts.

Girardi moved Schwarber back to the leadoff spot after the lefty slugger hit .279 with a .404 OBP, six homers and 13 RBI in 13 games batting fifth or sixth. It sounds like the leadoff spot is where Schwarber will stay for the near future.

The switch did not pay immediate dividends as Schwarber went 0 for 5 with two strikeouts.

Girardi also moved Bohm up to the two-hole and the third baseman responded with a single and a double. Bohm leads the Phillies in batting average (.322) and on-base percentage (.380).

"He's been playing great. It's one night. You've got to move on," Girardi said of Bohm's defense.

"You just encourage him and make sure he gets his work in. He's shown that he's able to respond pretty well so I expect him to do it again."

Castellanos away from the team

Nick Castellanos was scratched from Tuesday's lineup because his wife, Jess, went into labor. The Phillies did not place him on the paternity list because with Double A Reading in Portland and Triple A Lehigh Valley in Syracuse, they couldn't get someone to South Philly in time.

Odubel Herrera was also scratched an hour before game time because of allergies. He pinch-hit in the ninth. Roman Quinn started in center field with Matt Vierling in right.

Harper served as the designated hitter for the 14th straight game because of soreness in the area of his right forearm/elbow. Harper was scheduled to see the Phillies' team doctor after Tuesday's game, which could mean an update will follow Wednesday.

The Phillies and Rangers wrap up the two-game series Wednesday night at 6:45.