Not with Nico Hischier on the ice. 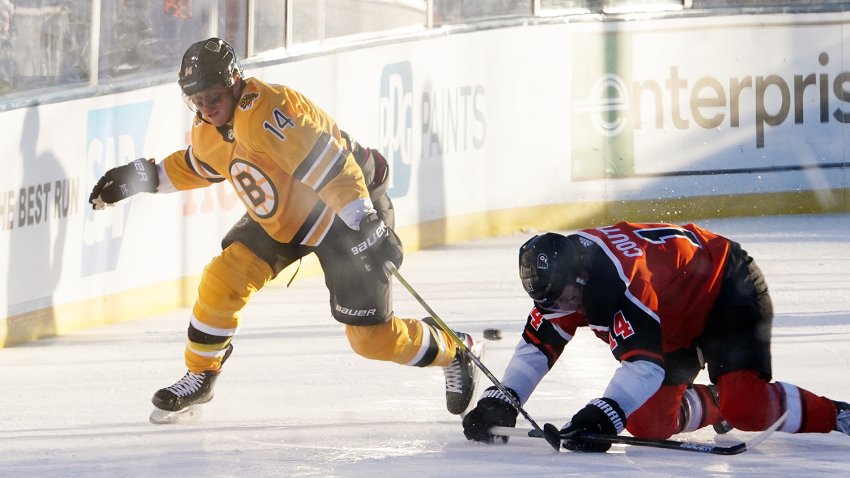 Motzko's U.S. team was leading Switzerland, 2-0, in the quarterfinals of the 2017 World Junior Championship. At the time, the head coach of the Americans had only heard of Hischier.

And then bam - he saw him. Hischier was coming, and at full force.

"I'll be honest, I didn't know him at all outside of the name," Motzko said this week in a phone interview with CSNPhilly.com.

"When we were getting ready to play that game and breaking film down, and then being on the bench - he was electric. He was a player that could change the game any minute."

It took over just 15 minutes on the game clock for Hischier to erase the two-goal deficit on a pair of plays often seen in NHL highlight reels. The first came in the second period when Hischier, composed and confident, gathered a loose puck off a blocked shot, smoothly faked a defender and scored in traffic. The second was a persistent Hischier who, after failing to score at one angle, slickly wrapped around the net before anyone could stop him for the third-period equalizer.

Just like that, Hischier, two days before his 18th birthday, singlehandedly had a stacked U.S. team pinned against the ropes. In the moment, Hischier was like a tidal wave Motzko's bunch was simply trying to survive. But in the grand picture, it etched a mark in Hischier's meteoric rise to becoming a top-two prospect for this weekend's NHL draft in Chicago.

To crown the winner of a neck-and-neck race, either Hischier or Canadian center Nolan Patrick will be the No. 1 overall pick by the Devils Friday night. Whoever isn't will fall to No. 2, where Ron Hextall and the Flyers wait.

Back on Jan. 2, in the midst of the World Junior Championship, Motzko was so impressed with Hischier, he called him "the best player we've seen in this tournament." That was no slight to rest of the field - it was just how captivating Hischier turned out to be when witnessed live.

He nearly upended the U.S., which went on to win the tournament by beating Canada, 5-4, in a thrilling shootout. Hischier came oh-so-close to ruining that run.

"I'll tell you right now," Motzko said, "if not for a save by our goaltender with about [four minutes] to go, there's a good chance we don't get to the gold-medal game."

After Hischier's game-tying goal, the U.S. regained the lead 18 seconds later. With 4:09 left in regulation, Hischier was robbed of a hat trick and another equalizer by a magnificent glove save from U.S. goalie Tyler Parsons.

"We knew we dodged a bullet, big time, getting out of that game," Motzko said. "To think if that game would have gone into overtime.

"With a guy like Nico in there, you don't want to get that game in overtime, because it would have been a full diet of him in overtime - I'm not sure he would have came off the ice. We were very relieved when we got out of that game."

Two days earlier, the U.S. had beaten Canada in the preliminaries. Hischier then gave the Americans a nightmare quarterfinal matchup.

"That was not a great game for us, that was coming off of our Canada win," Motzko, a 12-year coach of St. Cloud State University, said. "We were so fortunate. … You did not want to be in a one-goal game against that team with Nico Hischier on the ice. That's what we ended up getting, a one-goal game. If not for our goaltending, there's a chance - it was just a heck of a save. The puck fell on the right guy's stick, it's just our goalie stood tall."

Hischier was more than advertised and finished the world juniors with seven points (four goals, three assists) in five games.

"He just kept validating it as we were watching, really the clips of the tournament - it wasn't one play, it was all the plays that he was making," Motzko said.

A performance that will be remembered when Hischier walks across the draft stage on Friday night at the United Center - possibly taking pictures in a Flyers jersey.

"When you're in that tournament, you're seeing a lot of the future stars in the NHL," Motzko said. "There's no question, if you're a player in that tournament that's making an impact like he did, you're seeing a potential future star. That's the best of the under-20 in the world, outside of a handful of the guys in the National Hockey League. That young man has one bright future in front him."