Over the past few days, there has been an outpouring of support for Wayne Simmonds from fans and teammates alike.

We saw the emotional exchange Saturday night after the Flyers topped the Penguins in overtime at Lincoln Financial Field, but NBC released some audio of Claude Giroux mic'd up that provided an even greater look into the respect Simmonds earned with his teammates over the past eight seasons.

Hear the 2019 Stadium Series from those who played in it. 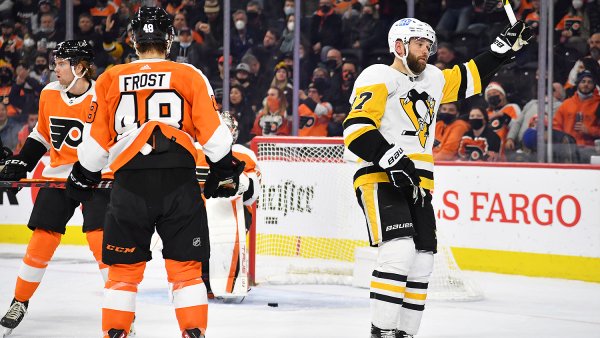 Flyers Vs. Penguins: Too Many Missing Pieces as Pittsburgh Wins 10th Straight

First of all, you've got to love hearing the captain bark out some instructions to his teammates and drop an F-bomb after scoring the game-winning goal, but his message to Simmonds right after the game hits you right in the feels.

Simmonds replied, "I love you, too."

Maybe it's the fact that we have been chasing an athlete for the past two months that may or may not want to play in Philadelphia, but it feels like fans can appreciate a guy who gave his all to the city for so long even more than usual with Simmonds' departure. When a player gives you what Simmonds has over his time here, given the climate of switching teams and free agency, it should definitely be celebrated.

But is the Wayne Simmonds era in Philadelphia over for good? Maybe not.

It could be tough to fit Simmonds in financially on a free-agent deal, but you just love to see the support he has received from everyone and the fact that he's showing love back.

While Nashville doesn't play the Flyers the remainder of the season, it'll be fun to see Simmonds back in Philly someday, in the orange and black or not.