Sometimes a team needs only two goals to win.

Jordan Weal scored on a follow with 3.1 seconds left in overtime, giving the Flyers a 2-1 victory over the Carolina Hurricanes. 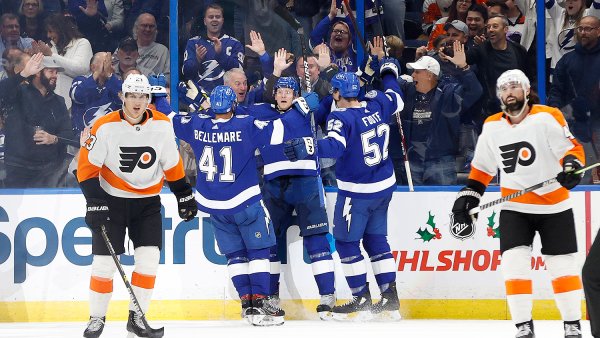 Brian Elliott was back in goal for the Flyers following a four-game absence with a lower-body injury, and the team came in riding a four-game losing streak.

The Flyers had scored three goals in each of their previous three games, but gained a point only in their 4-3 overtime loss at Ottawa.

• Carolina got its regulation goal on a four-minute penalty at 15:05 of the first period. The Hurricanes scored on Elias Lindholm's follow of his own shot in the crease. It was Carolina's 14th power-play goal in its last 16 games.

•  Nolan Patrick had given Brock McGinn a nasty bloody nose to set up the double-minor.

•  The Flyers trailed 1-0 after 20 minutes despite outshooting the Hurricanes 11-10. The Flyers were 0 for 2 on the power play during the period.

•  The Flyers, who always have noisy support in Raleigh, got the tying goal from Wayne Simmonds. Simmonds worked hard to get the rebound of a Jakub Voracek attempt with Andrew McDonald on the helper. It was Simmonds' 18th of the season and Voracek's 52nd assist.

"I thought we did a great job of getting in on the forecheck," Simmonds said. "We kind of followed up from what the line before us had done on the break in. We got pucks to the net and I was lucky that I found one at my feet and was able to put it in."

•  Shots were tied at 21-21 after two, but Carolina had just two shots in the third.

•  Carolina's marketing department billed the game inside the arena as "crashing the party," a good-natured opportunity to somehow take the luster off the Eagles' win in Super Bowl LII.

• RW Dale Weise and D Mark Alt were healthy scratches for the Flyers. With Elliott back in the lineup, the Flyers had no injuries to report and are among the league's healthiest teams. So is Carolina.

• It was the teams' first meeting of the campaign. The others this season are March 1 in Philadelphia, on St. Patrick's Day in Raleigh and on April 5 in Philadelphia. Last season, the Flyers won two of five outright, with each team prevailing once in overtime.

• The Flyers will host Montreal on Thursday night before visiting Arizona on Saturday and Vegas Sunday.