Flyers Vs. Islanders: 9 Come Up Empty in Shootout for 9th Straight Loss

The Flyers did a lot of things well Tuesday night but went 0 for 9 in the shootout for a 4-3 loss to the Islanders, their ninth straight defeat.

Tuesday night was the unlucky nine for the Flyers.

The team dropped its ninth straight game with a 4-3 shootout loss to the Islanders at the Wells Fargo Center.

Nine Flyers went scoreless in the skills competition. The club is 0-4 in the shootout this season.

It's the first time the Flyers have had two losing streaks of eight games or more in the same season since 2006-07, when they finished an NHL-worst 22-48-12.

Including the playoffs, the Flyers have gone to OT 10 times in their last 17 matchups with the Islanders (13-13-6). With a 4-1 loss Monday night and Tuesday's decision, the Flyers were swept by New York in the back-to-back set.

• The Flyers played one of their better games since the calendar flipped to 2022.

They held the Islanders to single-digit shots in every period, responded well to a deficit and grabbed a lead early in the final stanza. 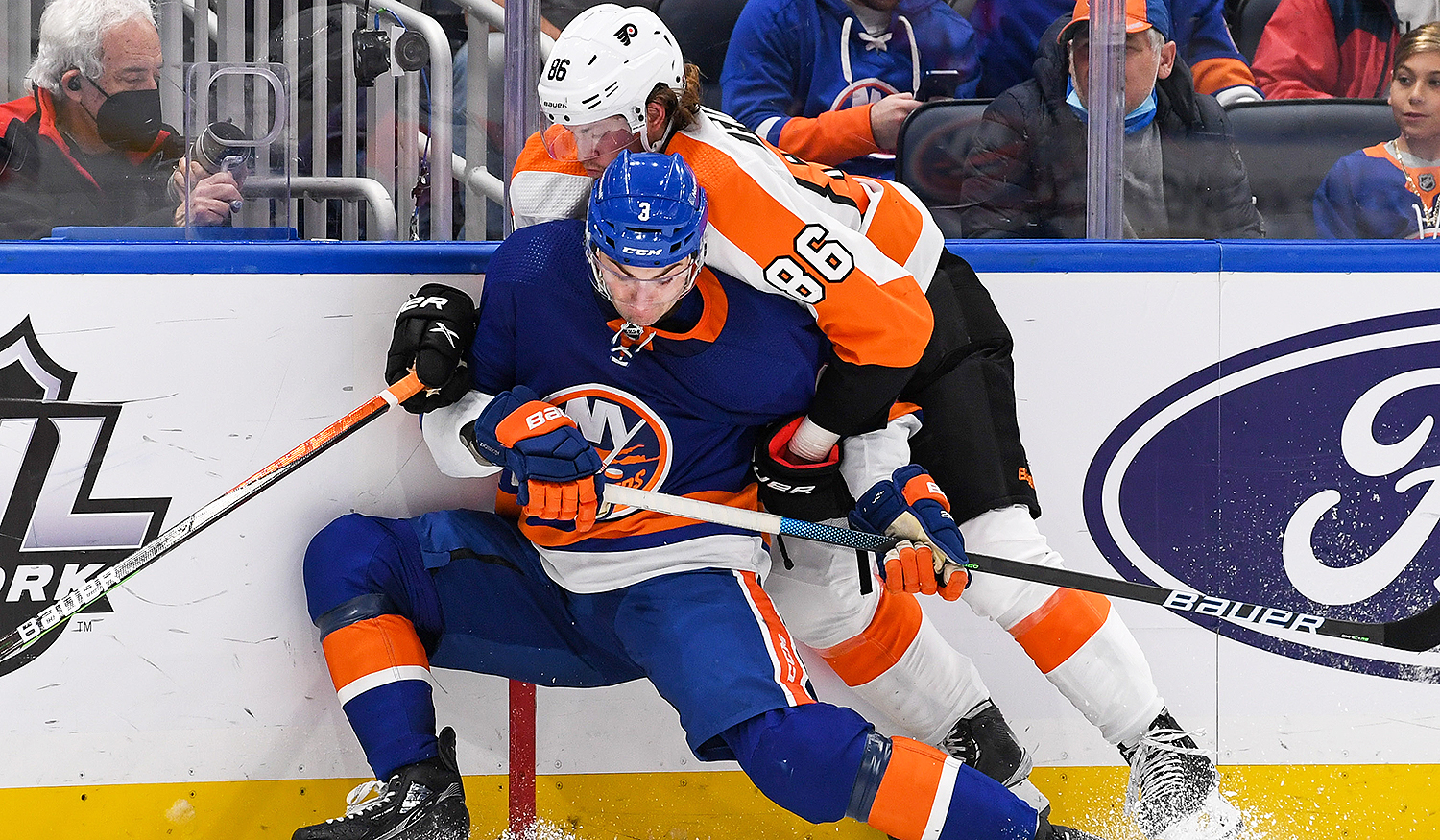 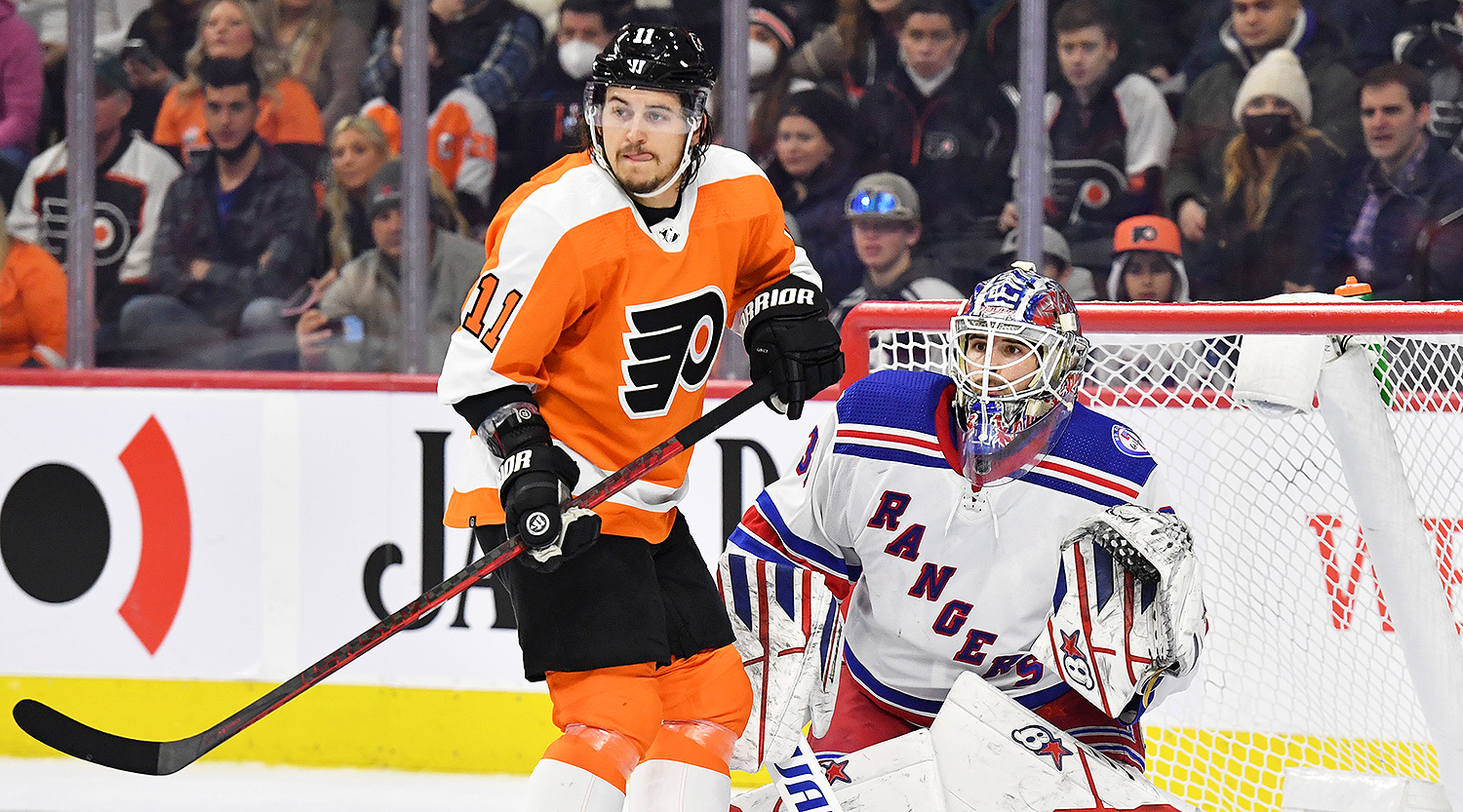 Flyers Vs. Rangers: A 7th Straight Loss That Really Stings

Giroux scored just over four minutes into the third period. With an assist on van Riemsdyk's first-period power play goal, the Flyers' captain finished with a two-point game.

The effort was there, the defensive commitment was there and the timely offensive production was there.

But still no win.

New York got the equalizer with 4:28 remaining in regulation.

To be fair, the Flyers fell short in only a few areas. But they were decisive areas: not holding a third-period lead and failing to score in the shootout.

More: 'Says a lot about him' — Flyers take another hit with Hayes having to miss time

• Farabee skated to the bench hunched over after taking a hit in the third period.

The 21-year-old winger appeared to point to his left shoulder when he was being evaluated by Flyers director of medical services Jim McCrossin. Farabee injured that shoulder earlier in the season and missed about two weeks.

He stayed on the bench and returned to the game, but something to keep an eye on this week.

• Justin Braun laid his body out there all night, blocking big shots at shorthanded. He gutted the game out in pain and played well while doing so.

• A day after snapping the second-longest goal drought of his career at 20 games, Konecny put himself on a goal streak with an important marker during the middle frame.

One of the Flyers' glaring issues has been allowing a goal against quickly turn into another goal against.

But Konecny promptly countered an Islanders goal with his own to send both clubs into second intermission knotted at 2-2.

Overall, the Flyers played a strong second period, doubling New York in shots with a 14-7 advantage. Rasmus Ristolainen came inches away from giving the Flyers a 3-2 lead with 50 seconds left in the stanza. His shot trickled to the goal line but Semyon Varlamov sprawled and covered it up.

The 23-year-old finished with 28 saves on 31 shots. He stopped six in overtime and was nearly the hero in the shootout.

Casey Cizikas beat him right on the doorstep with under five minutes left to force overtime.

Varlamov, the Islanders' backup, converted 31 stops on 34 shots and didn't allow the Flyers to score in the shootout.

• You've to tap your stick to Zack MacEwen for standing up to the 6-foot-9 challenge of 44-year-old Zdeno Chara.

After MacEwen delivered a hit on Scott Mayfield, Chara came to the defense of his teammate. The Flyers' winger and the future Hall of Fame defenseman dropped the gloves.

Nobody likes to fight Chara, who got the best of MacEwen. Good bout, though.

• A day after Martin Luther King Jr. Day, the Bruins retired Willie O'Ree's No. 22 in a ceremony Tuesday night at TD Garden.

O'Ree broke the color barrier in hockey on Jan. 18, 1958, when he became the first Black player to play in an NHL game.

Prior to puck drop at the Wells Fargo Center, a special tribute was played on the scoreboard to commemorate O'Ree's immeasurable impact on the game and celebrate his No. 22 going into Boston's rafters.

• Trying to avoid a 10th straight defeat for the second time, the Flyers host the Blue Jackets on Thursday (7 p.m. ET/NBCSP).

Jakub Voracek, who was traded to Columbus in the offseason, entered the NHL's COVID protocol last Thursday. It's uncertain if he'll back for a return to Philadelphia, where he played 10 seasons and climbed into fifth on the Flyers' all-time assists list.