When NFL rosters are at 90 players, jersey numbers get a little tricky.

The Eagles this past summer were no exception. They had several numbers owned by offensive and defensive players. They had some veterans come late and get paired with odd digits and a lot of times, these things don't get sorted out until the 90-man roster is pared down to 53.

Tim Jernigan Loves Philly, but Is at Peace With Whatever Free Agency Brings 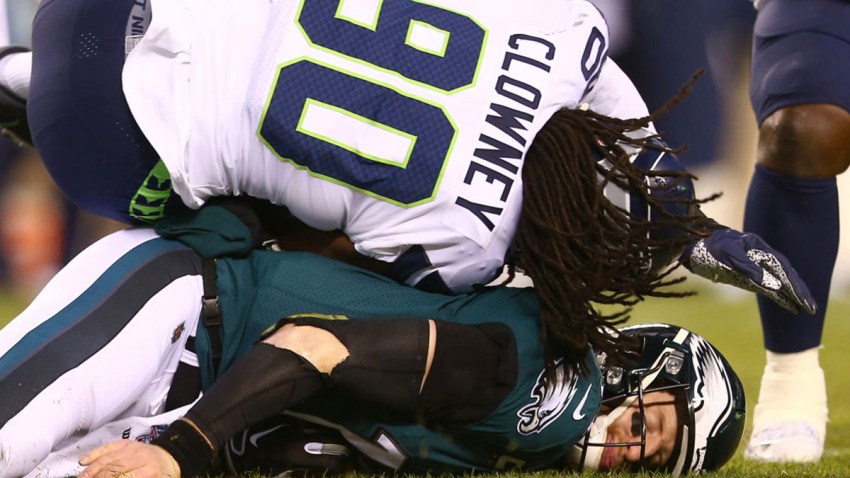 As silly as it sounds, most players care about their jersey numbers, at least to varying degrees. A few years ago, when Alshon Jeffery signed here, Nelson Agholor already had No. 17. Jeffery said he didn't care about his old number. But once he got it back, he showed up in the locker room with a big, blingy No. 17 necklace. I think he cared.

This year, five Eagles on the initial 53-man roster had their numbers changed after final cuts. Here are those stories:

When Cyprien signed this summer, the only number he had ever worn in the NFL (No. 37) was already taken by safety Tre Sullivan. Cyprien had that number for his four seasons in Jacksonville and two seasons in Tennessee. So he was stuck with 41 for a while.

But the No. 37 does have some meaning for him. In fact, it dates back to before he got to the NFL, when he was just a prospect coming out of Florida International.

If you're wondering, No. 7 on the North Team defense that year went to fellow safety T.J. McDonald from USC. McDonald was drafted a round after Cyprien, in the third, and has played and started 75 games in the NFL.

The Eagles traded for Ridgeway on Day 3 of the draft and all summer, he was one of those split numbers. He wore 64 on defense and undrafted rookie center Keegan Render wore 64 on offense.

During training camp, 98 belonged to Bruce Hector, who was traded to Arizona and is now back on the Eagles' practice squad wearing No. 90. For Ridgeway, 98 is a return to his college number at Texas.

"It was given to me by my (college) D-line coach," Ridgeway said. "It was my second number. I had 81 at first. He said you gotta have a real D-lineman number. It's funny I got the same one here."

Ridgeway wasn't able to wear 98 when he got to Indianapolis as a rookie in 2016. That number belonged to Robert Mathis in his final NFL season. The Colts haven't retired his number yet, but no one else has worn it since their all-time sack leader. Ridgeway wore 91 in Indy; that number is obviously taken by Fletcher Cox here.

The veteran linebacker, in his first season with the Eagles, didn't make a drastic number change. He said he wasn't feeling 51 and called it an "ugly number."

One man's trash is another man's treasure. Once Brown vacated No. 51, it was open and Miller took it. It got him much closer to what he wore in college: 48.

And Miller's favorite pass rushers (Von Miller and Khalil Mack) are in the 50s. He thought it suited him better than 76.

"I didn't even know Zach was changing, but I knew after the cuts went down, they called me and asked me if I wanted to change it," Miller said. "They told me the numbers (that were available) and I took it."

The Eagles traded for Ford late in training camp, so when he got here there weren't many options. And the 46 was open after the team released UDFA Jay Liggins. Ford was happy with anything in the 20s or 30s.

In Arizona, where he spent the last two years and the first two of his career, Ford wore No. 30. That number is owned by Corey Clement here.

"I was just excited to come to a place where I was excited to show my talents," Ford said. "It wasn't about the number. I'm sure somebody wore 46 before I got here. If I was to wear it, I would have put it to great use. Everybody would have known about 46, definitely."