Since the Eagles advanced to the Super Bowl, streams of “Dreams and Nightmares” have skyrocketed, according to Amazon Music.

If an anthem embodies the spirit of a time and place, then perhaps there is no better symbol of Philadelphia than Meek Mill.

"Ain't this what they've been waiting for? You ready? I used to pray for times like this," his hit, "Dreams and Nightmares," starts.

While the Philly rapper remains behind bars, his music soared over the Eagles' historic Super Bowl win Sunday night and throughout their entire road to victory. 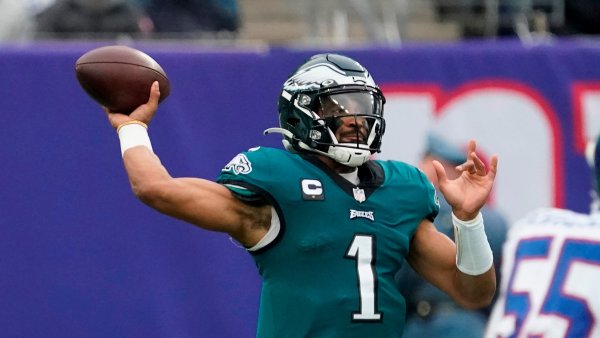 "Dreams and Nightmares" first became a national sensation after the Eagles blared the unofficial anthem when they became the NFC Champions in January.

And when they defeated the New England Patriots Sunday, the Eagles turned their locker room into a Meek Mill dance party:

Maybe it's the energy of that particular song that makes anyone within earshot get hyped when it plays.

Or maybe it's that Meek Mill, a Philadelphia native with a checkered past, is attempting to overcome his own underdog status within the criminal justice system.

Or maybe it's that something about his lyrics inspired the first Eagles team in history to win a Super Bowl.

Maybe it's all those things.

Whatever that special something might be, there is no denying that Meek Mill, at least symbolically, shared in the Eagles victory and helped get them there.

“Last night, I felt especially proud to be from the great City of Philadelphia," Mill told NBC10's John Clark. "All the heart that the Eagles showed in winning the Super Bowl has given the best fans in the world real hope and inspiration and I’m truly humbled."

The 30-year-old rapper was sentenced to two to four years in prison last year for violating probation on a roughly decade-old gun and drug case.

His lawyers unsuccessfully appealed to the higher court and have also called for the judge to step aside because "there was an FBI investigation" into her conduct and Mill's case.

"I wish my current situation was different, and that I could be with my brothers on that team, and the other Eagles fans, in celebrating this once-in-a-lifetime experience," Mill said. "But I have faith that truth and justice will win out in the end.”