Because Jason Peters left the Eagles game in the second quarter on Sunday, rookie left tackle Andre Dillard played 47 snaps, getting the first real playing time of his young career.

While there were a few plays he'd like to have back, it was overall a pretty encouraging performance.

What did Doug Pederson think about it?

"He had some good plays. He had some bad plays, quite honestly," Pederson said. "He's going against a great defensive end. [Vikings DE Everson] Griffen is a tremendous D-end and I have a lot of respect for him and his game, and there were times where Andre looked really good and then there were times when he got a little off balance.

"We have to do some technique work with him still some more. Just a young player in that atmosphere, but I thought overall, he did some really good things."

That's a fair assessment from Pederson. There really was some good from Dillard and some bad. But after rewatching the tape, I saw plenty of encouraging signs from the 24-year-old first-round pick. 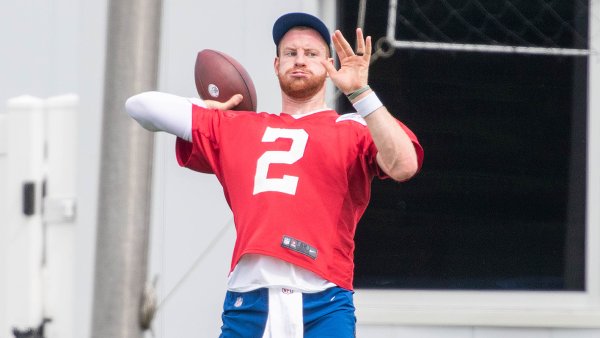 Wentz Out Indefinitely With Foot Injury, Which Should Concern Eagles Fans

The guy lining up to his right thought so too.

On Tuesday, I watched a handful of his best and worst snaps with my colleague and former NFL offensive lineman Barrett Brooks.

Here's what we came up with:

This was Dillard's first snap of the game and he ends up on his backside as Griffen nearly gets a sack on Wentz, who somehow pulled a Houdini to escape. Before the snap, Griffen was so excited to face fresh meat that he jumps off, but was able to get back. Because of the silent count, Dillard was busy watching the ball.

Anyway, this snap looked awful live Sunday, but watching the tape, Barrett pointed out what made it look so bad. You'll see as the running back (Miles Sanders) comes out of the backfield, he actually trips Dillard, who loses his balance and then gets driven into the ground by Griffen. Maybe he still gets beat on the play anyway, but he probably doesn't end up on the ground if his feet don't get tangled. And you'll notice that Dillard's hands are wide initially, but he quickly gets them repositioned. Barrett also noted that if Dillard doesn't get tangled, he probably runs the arc with Griffen.

This is the very next play. Again, it looks worse than it actually was for Dillard. Here, the Vikings run a T-E stunt and Seumalo struggles to pass it off. These stunts are designed to get the looper free, but a lot of times the DT ends up getting pressure. That's what happens here. Seumalo needs to a attack a little more.

Even though Dillard was put in a tough situation, he actually rebounds quite nicely and gives Wentz enough time to escape. It wasn't a great play from Dillard, but it wasn't as bad as it looked either.

On this quick screen play, Dillard is supposed to get to the next level and block a linebacker. But he gets to his spot late and doesn't get his feet set quick enough, so he's off balance and the ‘backer sheds the block and makes the tackle. If Dillard is able to make a better block, there's a lot of room ahead for Alshon Jeffery.

To me, this was Dillard's worst snap of the game. The Vikings' DEs normally stick to their sides, but with Griffen out of the game, Danielle Hunter lined up for a snap on the right side. Hunter doesn't do anything super special, but his one-handed stab devastated Dillard.

In this case, Dillard has to use his hand better to try to beat the stab. But the reason this play is troubling is because I wonder about Dillard's overall strength. I know he's quick and athletic, but it seemed like he was getting pushed back way too easily in this game, even on some "good" snaps I'll show you below. I think he needs to get stronger, which is something a lot of folks said when he was drafted.

On this snap, Dillard gets lined up against linebacker Anthony Barr. It's worth pointing out that Barr is a pretty big linebacker at 6-5, 255. Barrett was really impressed by Dillard's hand placement on this rep. He gets them inside Barr immediately and controls him.

Based on what he had already seen to this point, it's a questionable decision from Griffen to try a spin move; the power moves seemed to be working much better. But this was really solid from Dillard to stay with the rusher and redirect him after the spin.

This play reminded Barrett a lot of Dillard's first snap from earlier in the game. Without getting tripped up by the running back, Dillard again gets his hands wide, but quickly gets them back inside and then starts to run with Griffen up the arc.

Good design on the run here and Dillard does a nice job opening up the hole briefly. His run-blocking ability was a big question coming out of college. Because the Eagles were down early in this game, we didn't get a ton of examples. Barrett liked this rep but thought no one finished their blocks and he's probably right.

This was one of the more interesting snaps on the afternoon for Dillard. Griffen uses a strong bullrush and puts Dillard on skates. The impressive thing is that Dillard sticks with the block and even though the pressure forces Wentz to throw off his back foot (it was an incredible throw, by the way), Dillard gives Wentz enough time to deliver the throw.

The one thing Barrett really wanted to see from Dillard was to trap Griffen and get him to the ground. At one point on this bullrush, Griffen loses his balance and Dillard doesn't take advantage of it.

On this snap, Dillard is aware that the Eagles are sliding the protection his way. He knows help is coming inside, so he's just worried about making sure Griffen doesn't get around the edge. He's fine with Griffen trying to spin back inside because that's exactly where his help from Seumalo is going to be. Good awareness.

Just another good block in the run game from Dillard, who does a nice job finishing.

In all, I thought it was a pretty encouraging performance from Dillard, especially considering the situation. He was forced into the game at a moment's notice and without getting a chance to prepare. And he was also going against a team that has a pretty good pass rush.

Based on Peters' recent history, this won't be the last we see of Dillard this season. There were definitely some things to build on here.