Eagles Vs. Chiefs: Overreactions to the Birds' 3rd-Straight Loss

The Eagles held surprisingly close with the defending AFC champions, but the Chiefs pulled away because Nick Sirianni let them., Adam Hermann says. Check out more of his reactions to the Birds' third straight loss.

How about that: an unexpectedly entertaining game!

As someone who expected the Chiefs to roll right past the Eagles down at the Linc, I was pleasantly surprised to see the Birds keep things tight until Kansas City pulled away in the final 20 minutes.

Losing to a better team isn't a problem. The Chiefs are simply better than the Eagles. But losing a game that was entirely winnable is disappointing, and on Sunday the Eagles could've won. Which Eagles Soared, Which Failed? Grades by Position After Loss to Chiefs 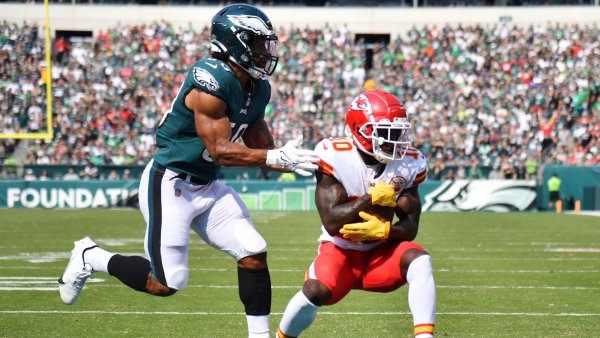 Is There Any Hope for Eagles' Defense After Chiefs Disaster?

So let's overreact to the L:

Yes, I know Nick Sirianni is a rookie head coach. I know it's his fourth game in charge of an entire team, and he's still learning on the job.

On Sunday, he cost his team the game.

Sirianni made a host of avoidable game management mistakes in a surprisingly winnable game against a superior opponent, the kinds of mistakes that often separate a shocking win from a frustrating loss.

- Called a timeout in the first quarter instead of taking a delay of game penalty, which would've still led to a close range field goal

- Failed to call timeout in the second quarter, not using it while the Chiefs wound clock at the end of the half in the red zone

- Chose to kick a field goal instead of go for it in the second quarter when the Eagles had 4th & goal from the 7, trailing by four

- Chose to kick a field goal instead of go for it in the third quarter when the Eagles had 4th & goal from the 6, down eight (penalty ensued, but the initial decision was wrong)

Those are four mistakes that kept the Eagles from playing a more competitive game against an explosive Chiefs squad that allowed Sirianni's team to hang around. When a good team opens the door, you can't keep closing it for them, but that's exactly what the Birds' coach did.

Sirianni has to be better. Maybe with reps he will be better. On Sunday, he wasn't.

2. Kenneth Gainwell needs to be a bigger part of this offense

He's played just four games, but I really love what I've seen from Kenny Gainwell. He's a versatile weapon with great hands and great field awareness, and he makes plays in open space. For a Day 3 pick, he already feels like a fantastic value pick for Howie Roseman.

And I think it's time for Nick Sirianni to start using Gainwell more.

Through three weeks, Gainwell was on the field for 33.2% of the Eagles' offensive snaps. He saw 62 snaps, and on those snaps he ran 16 times for 53 yards and a touchdown, and caught seven of 10 targets for 56 yards. In those 62 snaps he generated five first downs.

On Sunday, Gainwell caught six passes for 58 yards and ran the ball thrice for 31 yards and a touchdown.

Ladies and gents, Kenneth is for real pic.twitter.com/wT38JD75Z0

That's insane production from a rookie in his fourth-ever game as a pro, while seeing a fairly low percentage of the offense's snaps.

Miles Sanders is still probably (not definitely, but probably) the most useful running back on the team, but his glaring regression in the passing game since his rookie year is not helpful in an offense that needs to get creative to make up for a lack of bona fide talent. Having a running back who can make catches with regularity on the field makes life much easier for Jalen Hurts, who is clearly still trying to get his footing as a starting quarterback.

If Sirianni wants to give Hurts more easy plays, Gainwell is the perfect target.

And if that means cutting into Sanders' opportunities, that's fine with me. Sanders is obviously talented, but he hasn't really shown the kind of burst I want on the ground this season - albeit in limited touches.

Gainwell feels like a big play waiting to happen every time he gets a chance. He should get more chances to make those plays happen.

It's finally happening: Dallas Goedert is a real-deal, consistent TE1 option for the Eagles.

After being swallowed up in the shadow of Zach Ertz as a rookie and then having to push through injury problems last year, Goedert has been an absolute machine this season. He's regularly getting separation from his defenders, using his physicality to gain extra yards, and generally has been a monster when targeted.

Through four games, Goedert has 13 receptions, 188 yards, and two touchdowns.

And he could have another touchdown if one hadn't been called back Sunday on a brutal red zone penalty.

It's neat that Zach Ertz is still around and producing for the Birds, but Goedert is obviously the best tight end on the roster, and the Eagles should lock him up in-season before he hits unrestricted free agency this offseason. He's just 26 years old and looks like a legit Top 6 TE in the making.