All 3 Eagles Cornerback Positions Are Up for Grabs

Eagles defensive backs coach Cory Undlin was recently asked who the starting cornerback would be opposite Jalen Mills.

Undlin didn't answer the question, but he answered a more important one.

"That would be an assumption because we have no idea who's going to be out there when we start," he said. 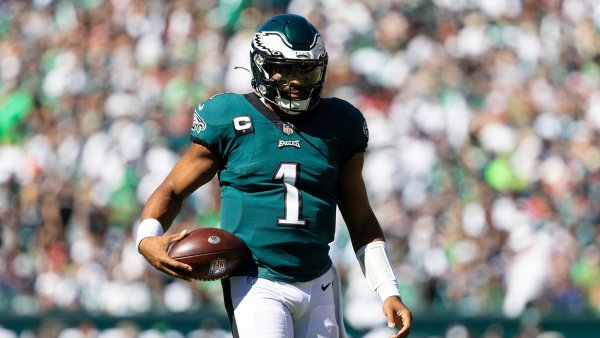 Eagles QB Jalen Hurts Critical of His Performance Vs. 49ers

"We'll keep grinding it down and then we'll find out the whole who plays where and who starts where when the time comes."

Undlin said in a recent interview both outside cornerback spots and the slot are all up for grabs going into camp.

"I like them all right now and we'll find out how it goes down, and that's what this whole [offseason] is for, to find out who's going to rise to the top and who's going to earn a spot and take it and then hopefully can keep it. We'll see how that goes."

The Eagles have 10 cornerbacks on the roster, and they're an average of about 24½ years old. Those 10 combined have started a grand total of two games in an Eagles uniform, both by Mills. All 10 have joined the team in the last 14½ months.

This cornerback group is young, it's inexperienced, and it's the perceived weakness of a team that is experienced everywhere else.

The Eagles haven't won a playoff game since the days of Lito Sheppard and Sheldon Brown.

"I don't care if they're young, old, whatever," Undlin said. "As long as they have a work ethic and come in and want to get better and can help us somehow, I'm good with it.

"You can ask Jalen, who's my best example now, having gone through it last year and played in the first game, so the experience is the only thing and there's no way (to accelerate it). Zero. None.

"We've got to do everything we can to shrink that gap so when they get out there it's not just brand new. But I like the group so far. Those guys are all working hard. We have a long way to go."

How long has cornerback been an issue here?

The Eagles have allowed more touchdown passes since 2009 - 234 of them - than any team in NFL history over any eight-year period.

Since the Eagles parted ways with their last elite cornerback, Asante Samuel, after the 2011 season, they've used 13 different starting cornerbacks.

The only cornerback who really has enjoyed any success was Eric Rowe, who won a Super Bowl ring with the Patriots last year after the Eagles unloaded him.

"Obviously, you'd love to have the same guys there [year after year], but the way this profession goes, that's just the way the roster has turned over," he said.

"I tell my guys all the time, I don't care who's out there, I could go in there Monday and there could be somebody [new] in there. I'm going to coach the guys that are in there and whoever ends up showing up every day and does the best job and comes in and competes and grinds every day, then that's who we'll play with.

"We don't know who's out there. It'll be who earns it. That's the profession right now. We don't [always] get these guys for four years. Eric Rowe? Here? Gone. That's the battle."

Will there really be improvement this year with such a young, untested group?

Undlin's honest answer is that he just doesn't know.

"I can't project that this group is going to be better than the group last year or whatever until we start playing games and you're seeing them actually perform in games," he said.

"I know this. They're showing up every single day, and they're working and they're trying to get better. I think they're all getting better. We've got a long ways to go. Training camp is not that far away, and hopefully we can keep getting better and better so when we hit Washington Week 1 we're where we need to be."