5 Minutes With Roob: Marcus Johnson Is Out to Prove Himself

Roob: You've been stringing some good days together here at training camp. Where are you compared to last year, when you came in as an undrafted rookie trying to find your way? Do you feel like you've made big strides?

Johnson: Definitely. I feel like I'm head and shoulders above where I was last year, but at the same time, I feel like I did things well last year. You know, it was kind of the same pace. OTAs went well. Going into training camp, I had a lot of momentum. Unfortunately, I had the injury. I just had to learn from that, understand that I need to take care of my body better and even when I feel good just staying on top of it because when I pulled my quad last year, it felt fine. It wasn't anything previous to that that made me feel like I needed to do anything extra on it, so I just stay on top of everything now. 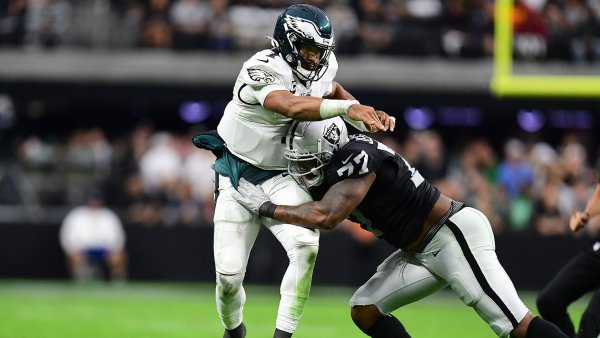 Roob: Let's talk about last year. You were on the practice squad to start the year and then they released you from the practice squad and you were out there for a couple months. What was that period like while you were between stints with the Eagles.

Johnson: It was an eye-opener because, like I said, a lot of things were going well. Unfortunately, it was halted, but I just had to continue to just build that mental toughness, continue to pray. Like I said, I didn't really doubt myself or what I could do. It was just a matter of time in my eyes. As the time starts to string along, you start to second guess, "Am I going to play this year? Am I going to be with anybody? Am I going to have to wait again for another season?" So, thank God that Philly called me back, I came back, and like I said, it was just a chance for me to have perspective on the whole situation and just really take advantage when I came back.

Johnson: To be honest, I feel like the biggest thing as far as working out was having teams come. Teams were calling for me to come work out. That kind of made me stay on top of staying in shape, doing extra every week because there were periodic, but they were consistent, so it was one of those things where you couldn't just sit back and be like, "Nobody's calling. Nobody's here," to get down on yourself. And I wasn't going to do that anyway. Even if no teams had called, I was going to continue to work and just stay prepared. But it was tough. Like I said, I just had to pray on it, continue to stay prepared for it.

Johnson: To be honest, like I always say, it's one of those things where you have to put your best foot forward every day. Present the greatest version of yourself, and like my coach told me in high school, just continue to close the gap. The rest will take care of itself. Going into this offseason during OTAs, I knew we had Alshon and Torrey, and I just prayed on it and knew it was one of those things where I was going to have to step my game up. Having a new receiver coach in Groh I didn't know what to expect with him. But I also knew at the same time that those are guys you can learn from. Just stay prepared for it and, you know, it's been working out great. This whole situation is a blessing.

Johnson: Absolutely, absolutely. It's one of those things where they expect you to step up. These are the times where you can show the coaches that I'm ready for - whether it's right now in practice, come the first preseason game against Green Bay, whatever it may be - just showing them that you can step up at any time. The team won't miss a beat, the offense won't miss a beat, and there's still things I need to work on. I've been having good days, I've been taking advantage of opportunities, but I still look back. Like today, there was a lot of things I could fix and get better at.

Roob: Today was the first live stuff, so it's the first time you've gotten hit in a while, or you guys as a team have gotten hit - probably since last preseason game for you. What was that like? It was pretty intense out there. And hot.

Johnson: It was intense, it was a lot hotter than it's been. But that's football. That's what you play the game for. You know what you're getting into, and that's going to get us better as we approach the first preseason game. We had one today, I'm not sure when our next one will be. I think it might be Sunday at the open practice, I'm not sure. But, again, those are days where you have to take advantage. Live periods, pads on, whatever it may be - those are the days where you want to step and put something good on film.