All but forgotten as postseason contenders, Donovan McNabb and the Philadelphia Eagles have a playoff win.

Next up: the Super Bowl champions.

Brian Westbrook caught a short pass out of the backfield and zigzagged through the Minnesota defense for a devastating 71-yard touchdown midway through the fourth quarter, and the Eagles spoiled the Vikings' first home playoff game in eight years with a 26-14 victory Sunday.

"I've seen this team have confidence in each other and try to have one another's back," McNabb said. "What you're seeing is a team playing with a lot of energy, playing with emotion, and just having fun." 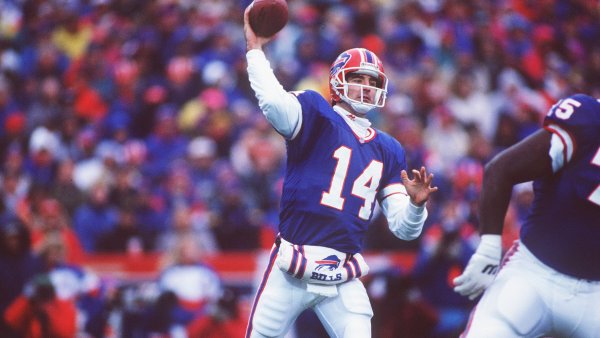 Asante Samuel's 44-yard interception return of Tarvaris Jackson's errant pass in the second quarter set a tone for the kind of game most Vikings fans feared from the unpolished quarterback.

Andy Reid improved his playoff coaching record to 9-6, including at least one win each time the Eagles have qualified in his 10 years. He bested his buddy and former offensive coordinator Brad Childress in this one, and they spoke for several moments on the field after the game while maybe a thousand Eagles fans cheered around the tunnel entrance and began a derogatory chant toward the Giants.

Philadelphia will play next Sunday in New Jersey against the top-seeded defending champs, sending Arizona to play Carolina in the other NFC semifinal on Saturday.

Jackson, who lost his job in September but got it back when Gus Frerotte was hurt, went 15-for-35 for 164 yards. Adrian Peterson's two touchdown runs weren't nearly enough for NFC North champion Minnesota, which will head to yet another off-season with burning questions about the quarterbacks.

Westbrook couldn't find any room to run, finishing with 38 yards on 20 carries even with two starters (Ray Edwards and Pat Williams) missing on Minnesota's defensive line. But McNabb, who went 23-for-34 for 300 yards, kept the offense from derailing.

He tossed a ball toward his always-reliable running back at just the right time with the Eagles clinging to a two-point lead after a scoreless third quarter. Westbrook received a slew of well-timed blocks as he slalomed downfield for the clinching touchdown.

"Anytime that you get an opportunity to give the ball to a guy like Westbrook, give him an opportunity in space or against any other defenders, you feel confident about that match up," McNabb said.

Stability at quarterback almost certainly would have given the Vikings another win or two, and perhaps a first-round bye. And despite a drastically better December, Jackson showed he's still quite raw and in need of a lot more experience.

His one big mistake really hurt, an underthrown out route to Sidney Rice that Samuel read perfectly and picked off for a 44-yard return and a 16-7 lead.

McNabb wasn't perfect. He threw an interception, lost a fumble in the third quarter and took an 8-yard sack to push the Eagles out of David Akers' field goal range. But the Vikings didn't capitalize on the turnovers and left plenty of receivers open in the middle of the field -- particularly Jason Avant and tight end Brent Celek -- for McNabb to target.

Though he was benched briefly in November, before the Eagles won four of their last five games to sneak into the playoffs, McNabb set a franchise record for yards passing this year and helped Philly make the postseason for the seventh time in nine years. There were some bad games, but he's still in the league's upper crust of quarterbacks.

"Donovan did a great job today leading this team. Basically putting the team on his back," Westbrook said. "We really didn't have too much of a running game, but he put this team on his back and threw the ball down the field -- just sitting there in the face of the blitz. And that's what you expect from a superstar quarterback like Donovan."

After Akers made a 51-yard field goal -- he went 4-for-4 for the afternoon -- to finish the first quarter, the Vikings drove 78 yards for the lead. On third-and-2 at the Philadelphia 40, Peterson zoomed through the line untouched and beat Quintin Demps to the corner of the end zone for his first playoff touchdown.

Jackson snapped back after his big mistake, throwing a pair of first-down passes on the next possession to put Peterson in position for a 3-yard, slicing run to pull Minnesota within 16-14.

But the Vikings couldn't get any rhythm in the second half. Peterson didn't have any more holes, managing only 17 yards on eight attempts after halftime, and the Eagles applied plenty of pressure to keep Jackson from bouncing back.

"I think we rattled him kind of towards the end," defensive end Trent Cole said. "He had to get rid of the ball quick and move around. He was probably getting tight from a lot of pressure."

DeSean Jackson, the slithery rookie who Vikings coach Childress reverently referred to this week as a "human pogo stick," led the Eagles to six of their 16 first-half points. He returned a punt 62 yards -- a big weakness for the Vikings -- to set up the first field goal by Akers, and caught a 34-yard pass up the sideline preceding another three-point kick.

Jackson had 109 yards of punt return yardage, to just 1 yard by the Vikings on four Eagles punts. The only short field the Vikings had came after Jared Allen, who had two of their three sacks, knocked the ball out of McNabb's hand and gave them the ball at their own 46. But they promptly went three and out.