CAMDEN, N.J. - As far as basketball is concerned, we'll see how the Sixers' move to trade Mikal Bridges for Zhaire Smith and an unprotected 2021 first-round pick works out.

From a human side, it was absolutely brutal to watch Bridges talk about playing for his hometown team with a huge smile, minutes after proudly putting on his Sixers cap and shaking hands with Adam Silver, unaware of the report that the seemingly perfect fit wasn't to be (see video). 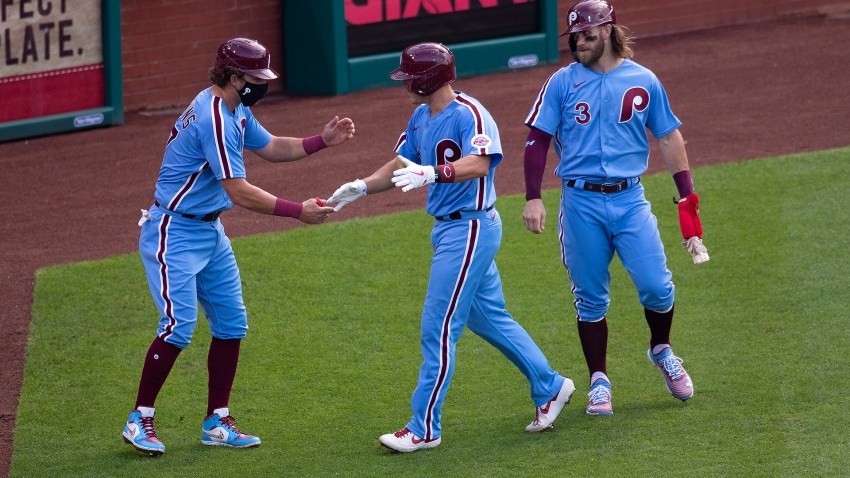 Phillies' Beleaguered Bullpen Gets the Job Done to Earn Series Split Vs. Yankees

"She's very, very excited," Bridges said of his mother's reaction, before he was informed of the trade. "She's been wanting this. She's probably more excited than I am. She's about to cry and all that but she said she didn't want to ruin her makeup, so she's trying to hold it in. But she's very excited. I'm her only son, momma's boy, so she's happy her son is right there around the corner again, and it's just really cool."

By now, you probably know Bridges' story. His mother, Tyneeha Rivers, is the Global Vice President of Human Resources for Harris Blitzer Sports and Entertainment, the company that owns the Sixers. Bridges went to Great Valley High and won two national titles at Villanova.

Coach and interim general manager Brett Brown knows Bridges' story, too. When the Sixers took Bridges 10th overall, Brown was thrilled, and not just because he thought Bridges was a great basketball fit.

"I live in this city with you all," Brown said. "I watch Villanova. I love his mom. I love his college coach. There is a human side of this that's really kind of hard to explain. And we all, I'm assuming, go from this level of excitement and coincidence, like you can't make this up, to there's this thing that involves our 1B, who we had targeted and brought back twice…"

That "1B" is Zhaire Smith. According to Brown, he felt obligated to do what could best help the organization win championships. To him, the high upside of Smith and a valuable asset in that future unprotected first-rounder outweighed the defensive ability, three-point shooting and winning mentality Bridges would have brought to the table. That doesn't mean it was easy to pull the trigger.

"There's a 20-minute, 15-minute window where you play text tag with the people involved," Brown said. "Everyone in that room knew how excited I was personally. As I said before, it really was 1A and 1B. And they're really different, because Mikal could probably come in and play and embrace an immediate role now. And Zhaire is this thing that can definitely turn into something incredibly unique, I really feel that.

"Emotions carry over that it's pretty cool, he's from Villanova, it's the city of Philadelphia, you can't make this stuff up, his mom works across the street, all that stuff. And then the human side of, ‘Wow, look at this deal!' Look at this incredible Godfather of a deal that can move our program forward in ways we couldn't have imagined before this draft. So you're caught. You really toggle between different emotions. Everyone here gets it. We all live here and understand the city and all that, and just at the end of the day, as time unfolds we'll realize how important a decision [this was] and how unusual an opportunity that we had that we just didn't feel comfortable [not] accepting. That's the human side of tonight."

Ultimately, Thursday night could work out just fine for everyone involved. Bridges could have a long, successful NBA career, Smith could fulfill his intriguing potential, and that 2021 first-rounder could be an important piece in the Sixers acquiring a star.

But it sure would have been cool for Sixers fans, 15 years from now, to be able to smile looking back on Mikal Bridges talking about how thrilled his mom was when he was taken by the Sixers. Instead, even if the Sixers form a dynasty thanks in part to Smith and that 2021 pick, they'll probably still cringe watching a beaming, oblivious Bridges think he's staying home.

"The human side of tonight is disturbing," Brown said, "but the process and how we grow the program and the thoughtfulness and the study that we put in, I feel like is wise for the program."