Complete coverage of the Philadelphia Eagles and their NFL rivals from NBC Sports Philadelphia.
Reporter

Jordan Mailata started to get a little defensive.

The Eagles' mammoth 6-foot-8, former Australian rugby player-turned football project, had enough. He instantly felt the need to defend his homeland against the evils of Americanization.

"A Bloomin' Onion is not Australian," Mailata pleaded.

Pryor shot back. "It's Australian!"

Then, Mailata ended the debate. 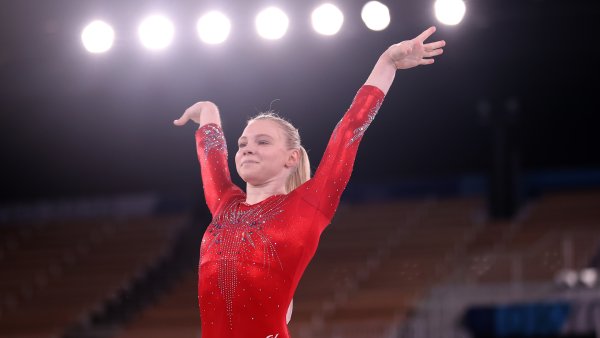 Who Is Jade Carey? Meet the US Gymnast Replacing Simone Biles in the All-Around Final

"Outback Steakhouse was founded in America," Mailata explained, now addressing his teammate and the reporter equally. "They just wanted it branded as an Australian restaurant. A Bloomin' Onion, we don't eat that out there. It's not a thing."

And just like that, another silly international stereotype was shot down in the Eagles' locker room. But there are still plenty more to overcome.

New in the Eagles' NovaCare Complex in the last month or so is a map in the hallway of the locker room and weight room. It's a world map with pins stuck in the countries from where Eagles players hail. They're starting to fill up that map.

At least six Eagles on their current 90-man roster were born outside the United States and represent four different continents. While the Eagles are just trying to field the best team they can, their choice of international players is likely broadening the horizons of other players.

Here's a list of Eagles who were born outside the United States:

And most of them have heard something similar to the Bloomin' Onion.

Zaruba, who is a former Canadian rugby player, gets told all the time that he has an accent. He doesn't hear it, but he does hear all those tired and pretty humorous Canadian stereotypes. When he got to the Eagles last year, one assistant coach called him "Calgary" because it was the only thing he knew about the country.

Zaruba is actually from Vancouver and his family still lives up in Canada - or Can-ay-dia, as his teammates call it.

"Just we all live in igloos up there and we're really nice and say sorry and things like that," Zaruba said. "Just stereotypical Canadian stuff. Apparently, I have an accent. I think it comes out with certain words, maybe. I'm not super Canadian, aboot, and all that."

Ajayi moved from London when he was 7, but still has a pretty noticeable accent. Mostly, Ajayi said, his teammates are just curious about what it's like to live in London so he's happy to answer questions.

He does have a favorite though.

"When people ask me, ‘what language do you speak in London?'" Ajayi said through laughter. "I'm like ‘we speak English.'"

The other guy in the locker room from Europe grew up just on the other side of the Channel Tunnel from Ajayi. Undrafted rookie receiver Anthony Mahoungou grew up in Paris, France, and didn't come to the States until he went to junior college. Eventually, he made his way to Purdue and now into the NFL.

While Mahoungou is from a diverse part of Paris that allowed him to grow up around African American culture, he gets a lot of questions about what some folks think is French cuisine.

Mahoungou laughs off the frogs, but the stereotype that bothers him is that the French are soft. He experienced opponents and even teammates early in college who expected him to lack toughness because he was from France. He had to prove them wrong.

All of these guys has a pretty big following in their home countries, and it's not just from family members. Plenty of casual fans from around the globe are rooting for guys in the Eagles' locker room because of national pride.

"It's not a pressure. It's more a sense of pride," Mahoungou said. "I want to make sure that because I'm the only French guy in the league and I was the only French guy in DI in college, I have to show my best. It's that simple. You never know, if I do wrong, it might close a door for people in the future. It's just a chip on my shoulder that I carry with a big smile. It's not bad pressure. I just have that chip on my shoulder."

All of these guys have at least some sort of pride about their homelands and understand that they're representing their families and much more as players in the NFL.

That's why they can laugh off those little stereotypes as long as they're coming from a good place. Heck, they can even have a little bit of fun with them.

Mailata jokingly said he's thinking of putting a tally chart above his locker to update every time he hears an Australian stereotype.

"We get Bloomin' Onions and kangaroos. … Foster's," Mailata said, long after Pryor grew bored of the conversation. "Foster's is another thing. It's an American brand. It was made in America. Made from local imported ingredients. Everyone is like, ‘you drink Fosters out there?' I'm like, what is Fosters? The boys, with their stereotypes, Vegemite and all that stuff. I do get the, ‘that's not a knife, this is a knife.'