More than 12,000 people surged into Wildwood, New Jersey, on Tuesday hoping to catch a glimpse of President Donald Trump. The president is holding a campaign rally at the Wildwoods Convention Center. Some supporters camped out for two days with the hope of making it inside the exhibit hall to hear Trump speak Tuesday evening.

Outside, there's a spectacle worthy of a music festival or major sporting event with people holding signs, grilling food and drinking beer and dressed in costumes alongside protesters opposing Trump and his policies.

We took a walk around Wildwood to chat with some of the event's attendees. 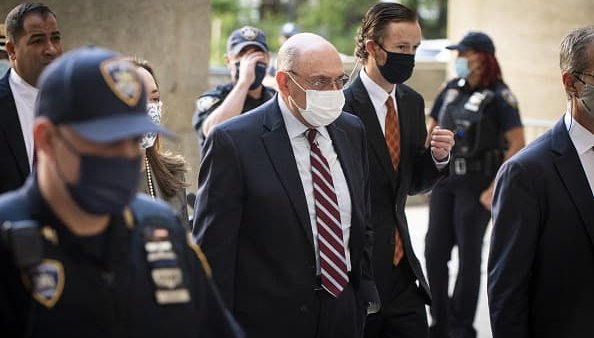 The Trump Organization 3 hours ago

Stephanie and Jim Richardson drove 45 minutes from their home in Berlin, New Jersey, to check out the scene. They also wanted to show their disdain publicly for the impeachment taking place a couple hundred miles south in Washington D.C.

“They just don’t like him,” Richardson said of Democrats in Congress. “They’ve been saying they were going to do this since the day he took office three years ago.”

The Richardsons didn’t try to get into the rally line after arriving in Wildwood Tuesday morning. He happily walked the boardwalk and around the several thousand waiting in a blocks-long line for the rally later in the evening.

“We knew we didn’t get here early enough,” Stephanie Richardson said.
Her husband said he believes everything Trump has done has been done before by prior presidents.

“We’re here to support our president,” her husband added. “It’s a disgrace what they’re doing to him.”

Angela Iannacci decided she was going to come to Wildwood, New Jersey, for President Trump’s rally, then decided to attend in style.

“I came all the way from Long Island (New York) and dragged him here,” she said, standing in line hours before the 7 p.m. rally at the Wildwood Convention Center with her friend, Michael Wilson.

Wilson, of Chester Heights in Delaware County, Pennsylvania, also owns a place in Wildwood a few blocks inland from the convention center.

“We’ve been able to go back,” Iannaci said of her friend’s house. “We’ve been standing on line since about 5 a.m.”

It’s the second Trump rally for Iannacci, who attended a campaign rally in Beth Page near where she lives in Merrick on Long Island.

She knew she wanted to get all swag-ed up this time around. Wilson wasn’t going to be upstaged.

“I thought I’d dress up for the occasion,” he said.

Rich Duranto, of Ridley, Pa., was one of the most popular people along Atlantic Avenue in the hours before the rally.

“I got the mask two years ago at a CVS,” he said. “This is the first time I’m wearing it. I decided since I wasn’t getting in that I’d have some fun out here.”

Everyone wanted a photo with Duranto at Kelly’s Cafe. And even one person asked the Philly Eagle Trump what he thought of Andy Reid, the former Eagles coach now in charge of the Kansas City Chiefs in next weekend’s Super Bowl.

“He’s not my guy anymore, so I don’t care about him,” Duranto told the guy.
He said the impeachment “is a joke.”

“It’s all politics. That’s all they’re doing, just like we do,” he said of the Democrats and Republicans in Congress. “Goes back and forth all the time.”