Candidates in Pennsylvania's closely contested race for U.S. Senate jousted over bailouts, terrorist trials and Social Security in their first debate Wednesday while accusing each other of dishonesty and being beholden to big backers.

Democrat Joe Sestak and Republican Pat Toomey also dodged questions in the hour-long debate at the National Constitution Center in Philadelphia while trying to portray the other asreckless, extreme and responsible for a stagnant economy that'sleft Pennsylvania with fewer jobs than it had in 1999.

Toomey often brought up his background in business -- he traded currency and interest rate swaps at banks in New York and started a restaurant chain. Sestak, a retired Navy admiral, recalled his 31 years in the service, which included commanding an aircraft carrier group in war after the Sept. 11 terrorist attacks. 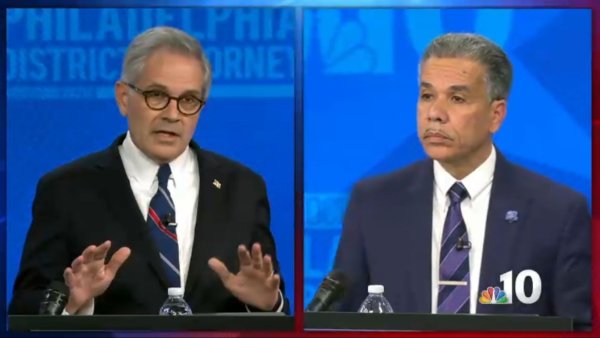 Sestak contended that Toomey's support for a plan to allow Social Security payroll taxes to be invested in private accounts would endanger America's retirement security while benefiting Wall Street and borrowing money to support the shift. Toomey said his plan would protect the benefits of older Americans, yield no profits for brokers and save a retirement system that is going broke.

“Joe has no solutions for the big problems that we face. Instead, it's mischaracterize, dishonest attacks, and if he gets close to a solution, it's always the same: Raise taxes,” Toomey said.

Toomey faulted Sestak for supporting bailouts but offered no answer to a question about what would have happened to the economy and jobs without the recession-driven bailouts of banks and two U.S. automakers.

Sestak, a second-term congressman from a suburban Philadelphia district, countered that he had the courage to support bailouts necessary to rescue the nation from a catastrophe wrought by Toomey, who was in Congress from 1999 to 2005, and former President George W. Bush.

“Sometimes you have to take care of other people's messes and just clean them up,” Sestak said.

“Why didn't he speak up then?” Sestak said. ``Why now, during an election?”

On educating children in poorly performing school districts, Sestak said the nation should try to fix the problem rather than “throw everything once more on the marketplace”, a reference to Toomey's support for a system in which taxpayers pay for children to attend a private school of their choice.

The debate broke little ground, with the men often falling back on responses they've perfected on the campaign trail.

They also accused each other of distorting statements, at one point arguing over whether Sestak voted for a bill that would allow federal funding of abortions.

“I voted against taxpayers funding it, and you know it, Congressman,” Sestak said.

“You did not, Joe,” Toomey shot back.

“Yes, I did,” Sestak asserted.

The two are vying to succeed five-term Sen. Arlen Specter, whom Sestak beat in the May primary.

National party committees, business advocacy groups, labor unions and more are pouring millions of dollars into the state in TV ads and get-out-the-vote efforts to influence the race.

Questions were asked by a panel of news professionals, including “Good Morning America” co-host George Stephanopoulos.