The Biggest Battleground: Why Who Votes in Philly, Suburbs Could Decide Election

Philadelphia, Bucks, Chester, Delaware and Montgomery counties have represented about 1/3 of total votes in the state in each of the last three elections. The region is more important than ever for Democrats.

Sitting on a bench outside the Delaware County Government Center, Laurie Miller surveys what’s in front of her. She sees people of various backgrounds, young and old, waiting to vote early. Some, like her daughter, have been waiting for hours.

What she can’t ignore, though, is that they’re all wearing face masks, now the requisite piece of cloth for those trying to avoid a potentially deadly bout with COVID-19.

A mother in the Philadelphia suburbs, Miller, 51, is the definition of the type of voter President Donald Trump is trying to court in his reelection bid. Only, Miller has no plans to vote for Trump. When she casts her ballot, it will be for Joe Biden.

Miller represents a critical voting bloc in the 2020 presidential race. In Pennsylvania, a crucial swing state pickup for both candidates, the battle for the presidency may be won or lost in Philadelphia and its suburbs -- Delaware, Chester, Montgomery and Bucks counties.

Since 2008, Democrats have lost ground statewide, with former blue counties of Luzerne, Erie and Northampton ultimately flipping red in 2016. While the city of Pittsburgh has ensured that Allegheny County remains reliably Democratic, that county in western Pennsylvania has become increasingly surrounded by a sea of red.

That hasn't been the case in the southeastern part of the state.

At a campaign stop in the state in early October, the president practically begged for support from the Pennsylvania suburbs, especially the women in those areas. “Suburban women, will you please like me?” he said.

But while the president tries to court voters there, Biden also cannot take southeastern Pennsylvania for granted.

In each of the last three presidential elections, more than one in every three Pennsylvania voters cast their ballots in Philadelphia and the four surrounding counties of Delaware, Chester, Montgomery and Bucks.

That’s a significant chunk of the electorate in a state that has had more Republican voter registrations than Democratic in the last four years and which Trump won in 2016 by less than 1%.

In some ways, it puts much of the Democratic Party's hopes for winning Pennsylvania on Nov. 3 on the backs of voters in Philadelphia and its immediate suburbs.

Propelling Biden are voters’ disapproval of Trump’s handling of the coronavirus outbreak, concerns over affordable health care, as well as changing demographics in the suburbs, where the president’s “law and order” rhetoric is not resonating as much as he might want and in fact possibly driving voters toward Biden, according to Monmouth University Polling Institute Director Patrick Murray.

Though Trump has made some ground in the polling over the last month, the latest Monmouth poll shows Biden leading the president by 5 points among all registered voters, and anywhere between 5 and 7 points among likely voters.

As Miller’s 18-year-old daughter, Ava Black, stepped away to cast her first presidential vote for Biden, Miller expressed her own disdain for the president’s rhetoric, calling it “comical.”

And she was not alone. 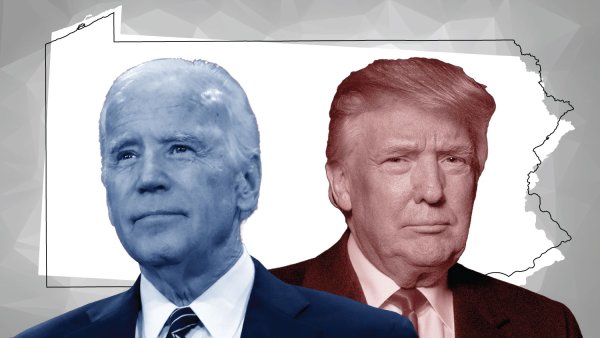 Presidential Race Tracker: See How Often and Where Biden & Trump Are in Pa. 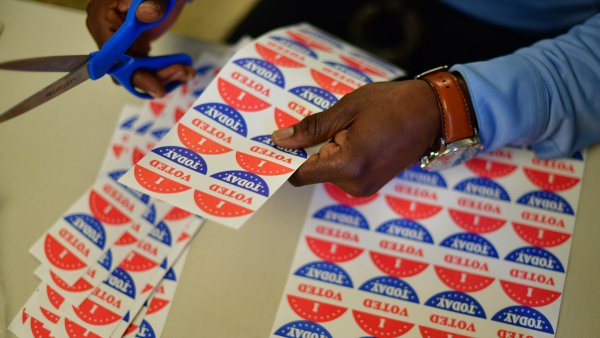 “When you express negative rhetoric and you take negative actions, that makes for a negative atmosphere over the country. And we don't need that. We are better than that,” said Edward Wiggins, a 74-year-old retiree who cast his vote for Biden.

In his neighborhood, Wiggins doesn’t see the hordes of criminals burning down cities that President Trump has warned about, and neither do Edward King, 57, or William Tate, 73.

But what they all do see are the effects of the coronavirus pandemic and what they view as the president’s failure in the country’s moment of crisis.

Miller was laid off three months ago and has seen family members hospitalized. Black is starting her freshman year of college virtually. King is having to care for his grandchildren while trying to teach them how to read as they attend virtual classes. Wiggins blames the virus for his uncle not being able to live to see his 100th birthday, given that he lost his battle with another illness around the time the pandemic forced the facility where he was staying to shut down.

And though Tate acknowledged he was doing comparatively better than a lot of other people, he nonetheless was wearing a mask as he held on to his dog and watched people walk by, a reminder that the country has not yet gotten a firm handle on the COVID-19 pandemic.

For Wiggins, all of it underscores his belief that Trump “is not the right man for the job.”

“He said that he didn't want to upset people. He said he didn't want people to panic,” Wiggins said, alluding to the president admitting to reporter Bob Woodward that he misled the public about the severity of COVID-19.

“He said he wanted to keep people calm,” Wiggins said. “Well, people are everything but calm.”

But despite the backlash to the president, there are also worrying signs for Democrats.

For one, they may have an edge in voter registration statewide -- roughly 4.22 million registered in their party compared with about 3.53 million Republicans -- but the same was also true in 2016, when Trump won. What’s more, Republicans have eaten into Democrats’ lead.

“They cut it exponentially. I mean, it's a 200,000-vote difference between what it was in 2016,” said Charlie Gerow, a verteran Republican operative and strategist. “I mean, that's a small city. That cannot be underestimated by anybody. That is a huge swing.”

The way Gerow sees it, voters are turned off by what he described as a “far left drift” by Biden and his party, and they’re motivated by Trump’s foreign policy and record on the economy, which has been the only issue which polls have consistently shown Biden trailing the president.

Some Democrats, like Brendan Welch, communications director of the Pennsylvania Democratic Party, say the rise in registered Republicans is due at least partially to older people who were registered Democrats long ago but who have consistently voted Republican and have only recently made their party switch official.

Sixty million Americans have already voted in the 2020 election so far, with two-thirds of those votes coming from mail-in ballots. NBCLX storyteller Chase Cain breaks down this huge surge in early voting.

That viewpoint, though, is a sign of Democrats “whistling past the graveyard,” Gerow said. He predicts another narrow win for Trump in Pennsylvania, albeit with a slightly bigger margin than in 2016 due to a sky-high level of voter enthusiasm for Trump.

"You know, if you were for Ronald Reagan, you put up a yard sign. Maybe if you're for Donald Trump, you put up 25, put a couple of flags and a banner, and you drive around in your car on Saturday morning with your horn honking with your Trump flags flying out the side,” Gerow said as, indeed, the loud motors of a Trump caravan drove by his window.

“That is something that, frankly, I hadn't witnessed before, and it's a level of enthusiasm that I haven't seen before,” he said.

More than a million mail-in and absentee ballots have been returned in Pennsylvania. NBC legal analyst Ted Shaw joins NBC10's Jacqueline London and Tracy Davidson us to sort through some ballot questions.

But there is no shortage of enthusiasm among Democrats, either, as evidenced by a so-called blue wave that swept Democratic candidates into Congress during the last midterm elections.

Those wins also trickled down to the local level.

Democrats also took control of county boards in Chester and Montgomery counties. In Philadelphia, already a Democratic stronghold, Republicans lost one of the two at-large City Council seats they still controlled to a third-party progressive candidate.

Welch said his party has run a statewide campaign that “does not take a single region for granted” and will see gains in rural areas on Election Day. But he also acknowledged the critical role of the southeastern suburbs.

“We are very encouraged,” Welch said. “I think, objectively, Democrats have had some really strong wins in the Philadelphia region, particularly the suburbs, over several years. There’s tons of new voters there.”

In the five-county Philadelphia region, Democrats have gained more than 72,000 registered voters since 2016. Meanwhile, Republicans have lost more than 7,500 in those counties during that same time.

The roughly 64,500-person difference in registered voters between Democrats and Republicans within the Philadelphia region may seem small compared to the more than 6.1 million Pennsylvanians who cast a ballot in the 2016 presidential race, but the figure is critical in a state Trump won only by some 44,000 votes.

Gerow, too, noted the importance of the region in Trump’s reelection chances.

“Really, the key for the Republicans statewide is to simply hold down the numbers in Philadelphia and in the collar counties surrounding Philadelphia,” he said. “If, for example, in Delaware County ... Trump and the Republicans can come out of there with maybe a 60-40 split, he'll win statewide. If it's a landslide in Delaware County, say 75-25, it's going to be very difficult for President Trump to win statewide.”

So, will Democrats be able to turn out their voters and overwhelm Republicans in 2020? Or will Trump, as in 2016, excite his base and flip enough Democrats into his column to once again carry Pennsylvania?

The way Tate sees it, the winds may be starting to shift once again. He has Republican friends who are sticking with Trump, but he also knows some who are jumping ship, even if he’s not sure they’ll vote for Biden.

“Well, I've talked to a couple people and they're not going to vote for him again, you know, because they didn't like what he's doing,” Tate said. “A lot of Republicans, they're not stupid and they don't want to see his stuff again.”