The latest news on the 2020 presidential election
New Hampshire Primary

What to Watch in New Hampshire's Primary on Tuesday Night

Here's what to watch Tuesday night as the returns roll in

The Democratic presidential race is deeply unsettled heading into the New Hampshire primary. It may be up to the state to put some structure around the chaotic contest, with Iowa being unable to declare a clear winner.

What to watch Tuesday night as the returns roll in:

IS THERE AN ENTHUSIASM GAP?

Fewer people voted in Iowa's caucuses last week than in 2016 and that has party operatives worried about voter enthusiasm going into November. Will New Hampshire's Democratic voters surge to the polls or also stay home?

New Hampshire's secretary of state has predicted a healthy 292,000 Democratic voters, which would be about 40,000 more than voted in 2016.

The turnout question hangs heavily over the field for two reasons. The start of Democratic voting in the long primary season coincides with a rise in anxiety among that party's voters about the presidential election and an increase in confidence among Republicans. Low turnout would be a sign of Democratic weakness at the ballot box, at least for now.

Second, the candidacy of Vermont Sen. Bernie Sanders is premised on the theory that his ultra-liberal platform will turn out new voters, but that didn't happen in Iowa. Whether more voters cast ballots in New Hampshire may carry big implications for Sanders' argument.

Before "The Strokes" brought down the lights — it was Bernie Sanders who blew off the roof at the UNH arena Monday night, offering a long list of reasons he should be the pick of New Hampshire Democrats on Tuesday.

DOES A CLEAR ALTERNATIVE TO SANDERS EMERGE?

Sanders has consistently led the field in New Hampshire. He represents a neighboring state and won New Hampshire handily in 2016, and the state's policies allowing non-Democrats to vote in the primary works well with Sanders' base. Because he also did well in Iowa and is well positioned in Nevada, the next state to vote, more centrist Democrats are warning that Sanders could in position to blitz his way to the nomination.

Polls show a majority of Democratic voters want someone other than Sanders right now, but it's unclear who. The anti-Sanders vote is split among former Vice President Joe Biden, former South Bend, Indiana, Mayor Pete Buttigieg and Minnesota Sen. Amy Klobuchar. And waiting for Super Tuesday states is former New York Mayor Mike Bloomberg, who's skipping the early states in favor of a massive ad campaign. 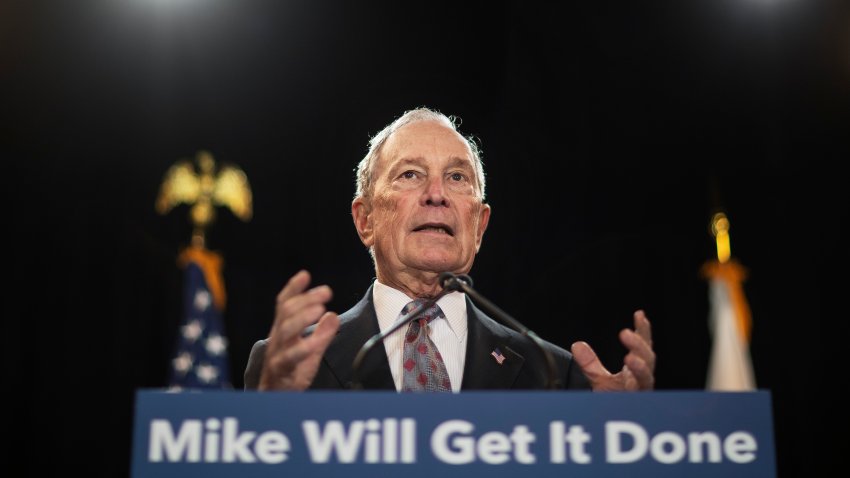 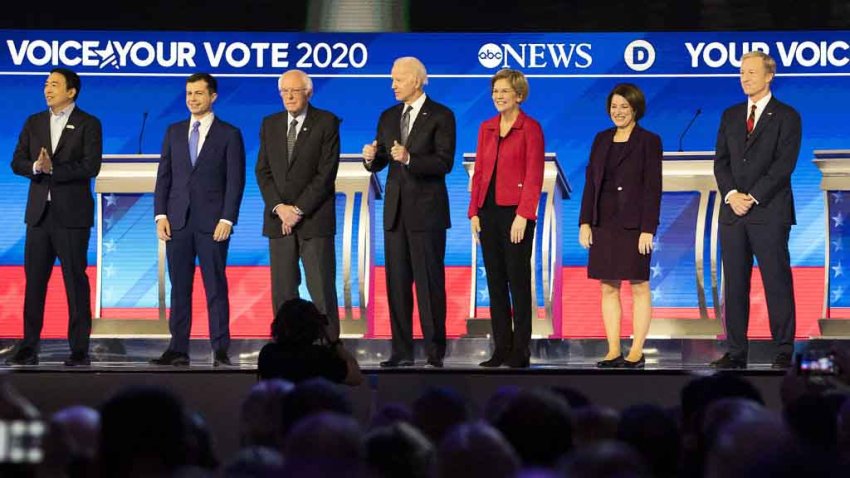 Will New Hampshire Crown a Front-Runner in the First-in-the-Nation Primary?

The best-case scenario for Sanders would be for all the moderate alternatives to emerge clustered behind him in New Hampshire, so no one could block him as the contest moves to a broader, and more diverse, set of states. The worst case, other than a loss, would be a single moderate candidate emerging with a clear mandate to take him on.

Pete Buttigieg took aim at President Donald Trump at his last rally before the first-in-the-nation primary, attracting a big crowd and even some Hollywood support, with actor Kevin Costner urging people to consider voting for Buttigieg on Tuesday.

DOES WARREN HAVE A PLAN FOR ANOTHER POOR SHOWING?

One more top-tier Democratic candidate is competing in New Hampshire — Massachusetts Sen. Elizabeth Warren. Like Sanders, she represents a neighboring state, but unlike Sanders, she's been stuck in a sort of political purgatory — not in dire enough shape that there's speculation about the demise of her candidacy, but with few signs of momentum in a state where she was once viewed as a favorite.

What happens to Warren on Tuesday night? As a liberal, she potentially has been pulling votes from Sanders. Does she do well enough to continue into the later states and Super Tuesday? Or does she continue to muddle along even in the potentially friendly terrain of New Hampshire, raising fresh questions about her viability?

WHO GETS STUCK IN 4TH OR 5TH PLACE?

There aren't any participation trophies. Iowa's muddle didn't kill any candidacies, but it's not clear that will continue in New Hampshire. With five viable candidates competing in New Hampshire, it's inevitable some will disappoint.

There are risks for every candidate in the field. If Warren can't crack the top three next door to her home state, what are her chances going forward? Likewise, if Buttigieg, who saw a polling surge after his strong Iowa performance, drops while under scrutiny in New Hampshire, can he recover?

What about Biden, whose electability argument might take a huge hit with another disappointing finish? And, then, of course, there's Klobuchar, who's lurked in the polling basement for much of the primary and wants New Hampshire to convince voters she's the real deal.

Amy Klobuchar hosted a rowdy event at a Manchester bar, making her final push for votes ahead of Tuesday's New Hampshire primary. The Minnesota senator has been buoyed by a string of New Hampshire newspaper endorsements, an infusion of cash and some polls projecting a third-place finish. She says she is sensing something happening for her campaign.

IS THE KLOBUCHAR SURGE REAL?

Speaking of Klobuchar, New Hampshire is perhaps her last chance to show her viability. 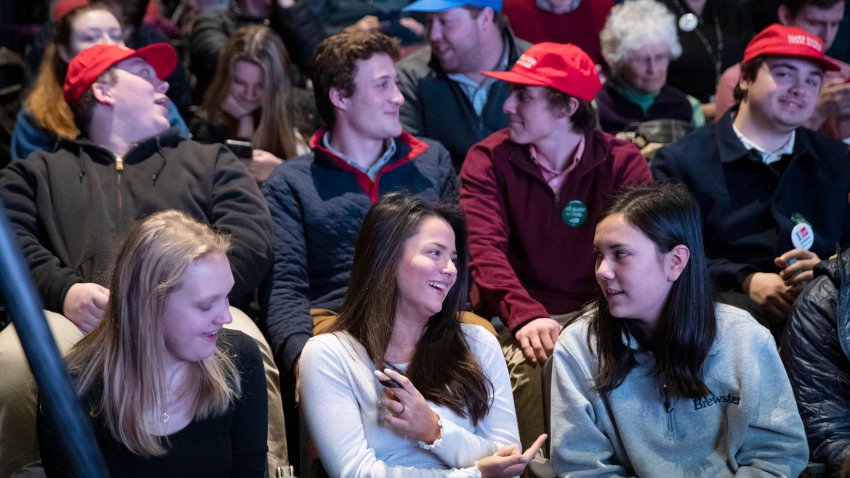 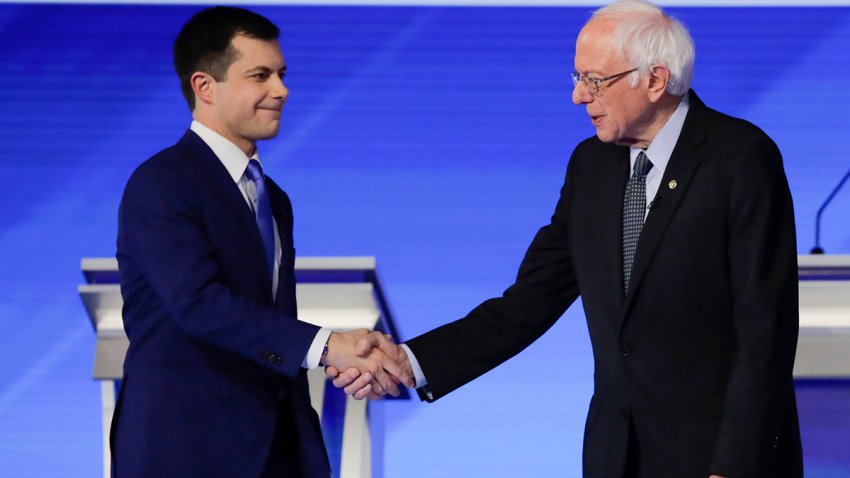 Initially, Klobuchar was hoping for a surprise showing in Iowa. She performed better than expected, but not in the top tier, and the inconclusive vote count allowed her to carry forward in the next mostly white, independent-minded state on the calendar. But after New Hampshire, the primary moves to more diverse states where Klobuchar has yet to register in polls.

Klobuchar delivered a strong performance in Friday's debate in Manchester, reported raising more than $3 million since then and drew big crowds in New Hampshire. Will that translate to votes Tuesday?

The field of Democratic 2020 presidential candidates is packed, though some have already dropped out. Those still in the race include a former vice president, senators, businessmen, House members, a former governor and a mayor. As for the GOP, a former governor is still vying to challenge President Trump.