The former assistant district attorney who served most of his 35 years in the office as one of the top homicide prosecutors believes he is better suited to tackle the city's gun violence crisis than current DA Larry Krasner.

Vega, who was fired along with three dozen other veteran prosecutors when Krasner took office in 2018, thinks he can continue to reform the system in Philadelphia while also punishing the criminal element behind the historically high number of homicides and shootings.

"I'm that third third wave. I'm that person who believes that we need reform and we need safety. We deserve both," Vega said in an interview with NBC10. "I'm that third choice, which is to say, I'm going to bring reform because I hear you, I've lived it, but I need to make you safe because I've lived it."

He's referring to previous approaches to law enforcement and criminal justice: the "lock 'em up" approach that led to mass incarceration for decades and, more recently, the progressive reforms of Krasner and other recently elected DAs in some American cities.

Vega grew up in the South Bronx, New York City, before going to law school and eventually calling Philadelphia home 35 years ago. He is the only challenger Krasner faces in the May 18 Democratic primary.

He sees himself as the right man for the times: an experienced prosecutor who grew up in a dangerous neighborhood without a lot of money, and who understands the plight of people of color in a post-Derek Chauvin verdict world.

Krasner, meanwhile, is trying to portray Vega as an obstacle to the progressive movement reshaping criminal justice in America, someone who would undo much of what Krasner's supporters believe as strong gains made in the last three years for Philadelphia's people of color.

Philadelphia District Attorney Larry Krasner, seeking re-election for the first time, is facing a former city prosecutor, Carlos Vega in the May 18 Democratic primary. Here is a look at the issues shaping the race.

"Carlos Vega’s way of doing things is simply to turn back the clock to a time when convictions were pursued regardless of truth, where the (District Attorney's Office) did not worry about mistakes, and where it never dared question police or hold law enforcement accountable," Krasner's campaign manager Brandon Evans said Tuesday. "His approach does not work for the good of this city and it would be devastating to stop the progress that we have made and return to the ways of the past."

Here is a primer on the South Bronx native who as a young man sold sunglasses on a street corner to get money for an apartment down payment and was recruited by former Gov. Ed Rendell to become an assistant district attorney in 1980s Philadelphia.

Where Is Carlos Vega From?

Vega grew up in the South Bronx, New York City, one of four children. As the oldest son, Vega said he spent many hours working in his mother's store, then later her newstand.

He said it was a dangerous neighborhood, with many people in the throes of drug addiction and others directly affected by violence. As a Catholic school student at the time, he said the suit he had to wear to school every day made him a target

"You didn't want to get detention because you'd have to walk home by yourself, and then you'd be outnumbered," he said.

Of the boys who were in his 30-student grammar school class, "only two of us made it out," Vega said.

He went on to Fordham University and then law school in Boston.

"As a kid, I always said, 'I'm going to be a lawyer," Vega recalled, and while learning the law, he realized that he wanted to become a prosecutor. Helping crime victims' families called to him.

'It Was a Battle': Getting Hired By the Philly DA's Office Under Ed Rendell

After graduating, a federal judge who knew the law school graduate prodded Vega to apply for the District Attorney's office in Philadelphia. It was run at the time by Ed Rendell, who would go on to become mayor and eventually governor of Pennsylvania.

Vega said 15 assistant district attorneys went hard at him in the interviews.

He passed the test, he said, because Rendell asked him to join the office as an ADA.

Within a few years, Vega was trying homicide cases. As the years went by, he tried hundreds of the highest-profile crimes. He worked under Rendell, then Lynne Abraham, and her successor, Seth Williams before Krasner, a former civil rights defense attorney, won the 2017 election. 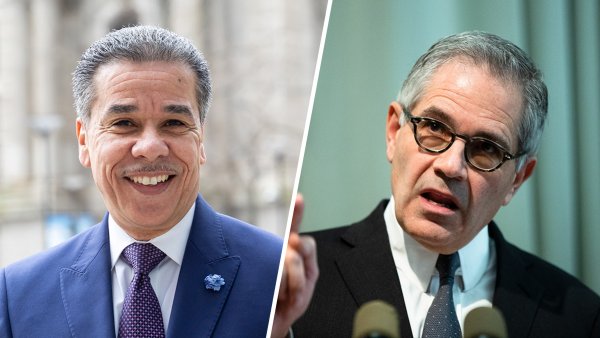 'I Saw Grown Men Cry': Being Forced to Leave

Vega was among more than 30 prosecutors told their services were no longer wanted when Krasner took office in January 2018. It is not unusual for some turnover after a new DA takes office.

But Vega said Krasner's reason for letting him go was different. He says the current DA called Vega a racist, which Vega calls not only preposterous but insulting considering he's a person of color who spent decades fighting for Philadelphia families who lost loved ones.

Vega said he saw fellow prosecutors cry as they were forced from an office they believed in on a personal level.

"I remember seeing my colleagues. You know it when I say we grew up together. I mean, when you're there 35 years and you've had a colleague 20 years, we know our children and everything. It was heartbreaking to see full grown men crying, seeing the females in the office crying, and to know that Krasner basically said we were racist, that anyone before him did not do the right thing, that we were wrong. We were racists. We participated in mass incarceration," Vega said. "And it was horrible to say. You know, I spent thirty five years of my life here trying to do the best I could, dispensing justice, an exemplary record that I was never brought with any misconduct. You know, proud of the fact that my cases were never reversed. Yet I'm a racist and I'm Latino, that I don't know about racism, which is interesting coming from a person who who's rich, went to Stanford and me, who grew up poor, worried about violence."

Vega is currently suing Krasner and the district attorney's office over his firing, claiming discrimination.

Krasner's supporters say he needed to change the culture in the DA's office to enact broad reforms. Those have included an overhaul of Philadelphia's cash bail system, decriminalization of certain minor crimes, and vigorously pushing for better policing.

Why Vega Is Running

The career prosecutor believes Krasner has gone too far to reform the city's criminal justice system, and says Krasner's prosecutorial approach has contributed to Philadelphia deadly surge in shootings since the beginning of 2020.

The city is in the midst of a gun violence crisis unparalleled in recent decades. Last year, amid the COVID-19 pandemic, 499 people were killed in Philadelphia, the second highest total of the last 60 years. In 2021, homicides are on pace to reach the highest total ever. Shootings are also very high in historical context, according to police department data.

Krasner disputes any direct link that his opponents say exists between his reforms and the gun violence.

"In 2017, Larry made promises to upend a broken system, and unlike most politicians, he has kept those promises. He has reduced unnecessary incarceration, implemented diversion programs that actually address the needs of the community, pushed for investments and programs that will serve the needs of Philadelphia, and held people who are causing harm accountable," Krasner's campaign manager, Evans, said. "He has actions he can point to and be proud of, not just empty words."

Vega said he too will continue to push for better policing in Philadelphia, despite what Krasner says. Vega does have the support of police unions, at least when it comes to campaign funding. The two unions representing city officers and Pennsylvania state police have contributed $12,600 and $12,000, respectively, to Vega's campaign.

Vega said wants every police officer to wear a body camera and every police vehicle to have a dash cam video. He also said he believes that the current rule allowing cops to move out of Philadelphia is one that should end.

"I disagree with the deal they made that officers after five years can move to the suburbs. I think if you're a cop in Philly, you live in Philly, that's where you buy a home, your kids are educated, be part of the community," Vega said. "And I know the people will turn crazy with that attitude I have. But, you know, that's the way I feel."

The candidates will make their case to Philadelphia voters on live television and radio May 5 during the lone debate ahead of the May 18 Democratic primary.

The debate will be broadcast live at 7 p.m. and moderated by NBC10 and KYW Newsradio reporters. It will also air live on NBC10.com and the NBC10 app as well as NBC10's Roku TV and Apple TV apps. It can be heard live on KYW Newsradio at 103.9 FM and 1060 AM.

The winner of the May primary will be the presumptive winner of the November general election, considering Democrats outnumber Republicans by a roughly 7-to-1 margin among the Philadelphia electorate.