Arizona Senate Republicans hired a Florida-based group, Cyber Ninjas, to oversee a partisan audit. The firm had no prior experience in elections, and experts in election administration say it’s not following reliable procedures

Contractors hired by Arizona Senate Republicans to oversee a partisan review of the 2020 election said Thursday that they don’t have enough information to complete their report, and urged legislators to subpoena more records and survey voters at home.

Leaders of the GOP audit described a wide variety of reasons their review is taking months longer than the 60 days initially planned, including confusion about damaged ballots and a lack of access to certain data. They described the delays during a meeting livestreamed at the Capitol Thursday and watched by thousands.

As the audit drags on, some Republicans worry the spectacle of widely discredited operations will drive away voters in next year's elections. Yet as long as it continues, it provides fodder for former President Donald Trump and other Republicans making false claims of fraud and vague allegations about ballot problems.

A hand count of a statistical sample of ballots matched the machine count, and two post-election audits found no manipulation of the machines. Trump lost Arizona by 10,457 votes.

More than 100,000 legit voters likely had their legit ballots rejected this fall for messy signatures – and some states are pushing to increase those numbers next election. So NBCLX’s Noah Pransky explains why it’s so important we push our elected officials to carefully balance voter protections with voter fraud protections.

Senate President Karen Fann told reporters after the meeting that she was still considering new procedures as part of the audit, which is focused on the vote count in Maricopa County, Arizona's largest county.

Senate Republicans had planned to canvass homes and ask people about their voting patterns, but in May dropped the idea under pressure from the U.S. Department of Justice, which warned the effort could violate laws against voter intimidation. Fann said Thursday she would consult with lawyers before deciding whether to proceed.

Fann and Judiciary Committee Chairman Warren Petersen used the Senate's subpoena power to take control of Maricopa County’s voting machines and ballots after Trump claimed without evidence that the 2020 election was rigged against him in Arizona and other battleground states.

The Senate hired Cyber Ninjas to oversee an audit. The small cybersecurity consulting firm is led by a Trump supporter who has spread conspiracy theories backing Trump’s false claims of fraud. The review calls for hand counting 2.1 million ballots and forensically evaluating voting machines, servers and other data. The firm had no prior experience in elections, and experts in election administration say it’s not following reliable procedures.

The auditors began the hearing trying to rehabilitate their image after election experts pointed to a litany of procedure flaws and security lapses. They showed a highly produced video describing their security and documentation processes and went into detail about work to preserve data integrity. 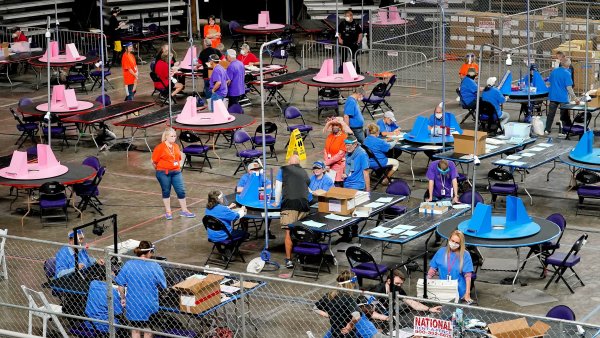 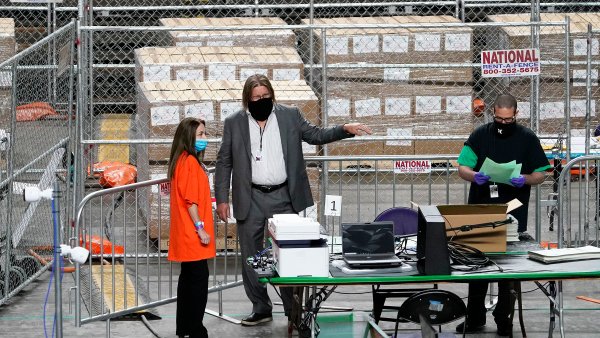 Cyber Ninjas CEO Doug Logan and two others — Ben Cotton, head of the data forensics firm CyFIR and former Republican Secretary of State Ken Bennett, who is serving as a liaison between the Senate and the auditors — raised a number of issues, many misleading or wrong, that they said could be resolved with more data or cooperation from Maricopa County. The county's Republican-controlled Board of Supervisors has called the auditors incompetent and refused to cooperate.

“That’s been one of the more difficult things with this audit, is not having that feedback loop,” Logan said.

Jack Sellers, the Republican chairman of the Maricopa County Board of Supervisors, said in a statement that the auditors are “portraying as suspicious what is actually normal and well known to people who work in elections.”

“What we heard today represents an alternate reality that has veered out of control since the November General Election,” Sellers wrote.

Fann has said repeatedly that no audit findings will be released until a full report is completed. But Logan and Cotton made several claims in their plea for more information. Among the records they're seeking are images of mail-in ballot envelopes, security keys for administrator-level access to voting machines, copies of internet routers, a diagram of the county's network and a copy of the county's voter registration database.

Cotton said the antivirus software on vote-counting machines hasn't been updated since 2019. The county responded that the machines are “air gapped,” or disconnected from the internet to prevent remote hacking.

“Installing security patches would be changing the system that was certified," county officials wrote on Twitter.

Logan pointed to ballots that were not printed in alignment between the front and back, saying the mismatch could allow ink to bleed through and be counted for the wrong candidate on the other side, though he did not provide any evidence of that happening.

The allegation harkens back to the “Sharpiegate” conspiracy theory that arose in the days after the election. Election experts say bleed through doesn't affect the vote count because bubbles on one side of a ballot don't align with those on the other, and any ballots appearing to vote for more than one candidate would be flagged.

Logan also said counting teams have struggled to match damaged ballots to their duplicates. Ballots unreadable by machines are duplicated by bipartisan teams, with the original set aside and the duplicate counted. And he said there are inconsistent voter registration records that can't be reconciled without more data.

There is no constitutional mechanism for President Joe Biden’s victory to be overturned, and Fann has said repeatedly that the audit is aimed only at identifying improvements for future elections. But Trump and many of his supporters hope the Arizona audit will support his fraud claims and lead to similar reviews elsewhere.

The auditors and lawmakers disputed Maricopa County's argument that the machines given to the Senate can't be used in future elections because they were handled by uncertified individuals. The County on Wednesday approved $2.8 million to lease new machines for the 2022 election.

“We have exactly a bit-for-bit image of these systems as we received them,” Cotton said. “We did not modify, we did not change any chips, we did not access anything other than the hard drives for those systems.”

Meanwhile, a Maricopa County judge ruled Thursday that records about the audit are public documents under the state's open records law, rejecting an argument by lawyers for the Senate that records maintained by Cyber Ninjas and other private firms do not need to be publicly released.