U.S. Secretary of State Antony Blinken warned world leaders at the U.N. that Russia could create a 'false flag' situation to justify an invasion.

Fears of a new war in Europe resurged Thursday as U.S. President Joe Biden warned that Russia could invade Ukraine within days, and violence spiked in a long-running standoff in eastern Ukraine that some fear could be the spark for wider conflict.

World dignitaries raced for solutions but suspicions between East and West only seemed to grow, as NATO allies rejected Russian assertions it was pulling back troops from exercises that had fueled fears of an attack. Russia is believed to have built up some 150,000 military forces around Ukraine’s borders.

Concerns escalated in the West over what exactly Russia is doing with those troops — including an estimated 60% of the overall Russian ground forces. The Kremlin insists it has no plans to invade, but has long considered Ukraine its sphere of influence and NATO's eastward expansion an existential threat.

The U.S. government issued some of its starkest, most detailed warnings yet about what could happen next.

Speaking at the U.N. Security Council, U.S. Secretary of State Antony Blinken revealed some conclusions of U.S. intelligence in a strategy that the U.S. and Britain have hoped will expose and pre-empt any invasion planning. The U.S. has declined to reveal much of the evidence underlying its claims.

He told the diplomats that a sudden, seemingly violent event staged by Russia to justify invasion would kick it off.

“We don’t know exactly” the pretext — a “so-called terrorist bombing” inside Russia, a staged drone strike, “a fake, even a real attack … using chemical weapons,” he said.

U.S. Secretary of State Antony Blinken addressed the U.N. Security Council on Thursday, imploring world leaders to exercise diplomacy to prevent war. “Let me be clear: I am hear today not to start a war, but to prevent one.”

It would open with cyberattacks, along with missiles and bombs across Ukraine, he said. Painting the U.S. picture further, Blinken described the entry of Russian troops, advancing on Kyiv, a city of nearly 3 million, and other key targets.

In an implicit nod to Secretary of State Colin Powell's appearance before the Security Council in 2003, when he cited unsubstantiated and false U.S. intelligence to justify the U.S. invasion of Iraq, Blinken added: “Let me be clear. I am here today not to start a war, but to prevent one.”

Biden’s own comments on the Russian threat were unusually dire.

Speaking at the White House, he said Washington saw no signs of a promised Russian withdrawal, and said the invasion threat remains “very high” because Russia has moved more troops toward the border with Ukraine instead of pulling them back.

U.S. Presses for Diplomatic Solution as Markets Are Hit by Latest Ukraine-Russia Tensions 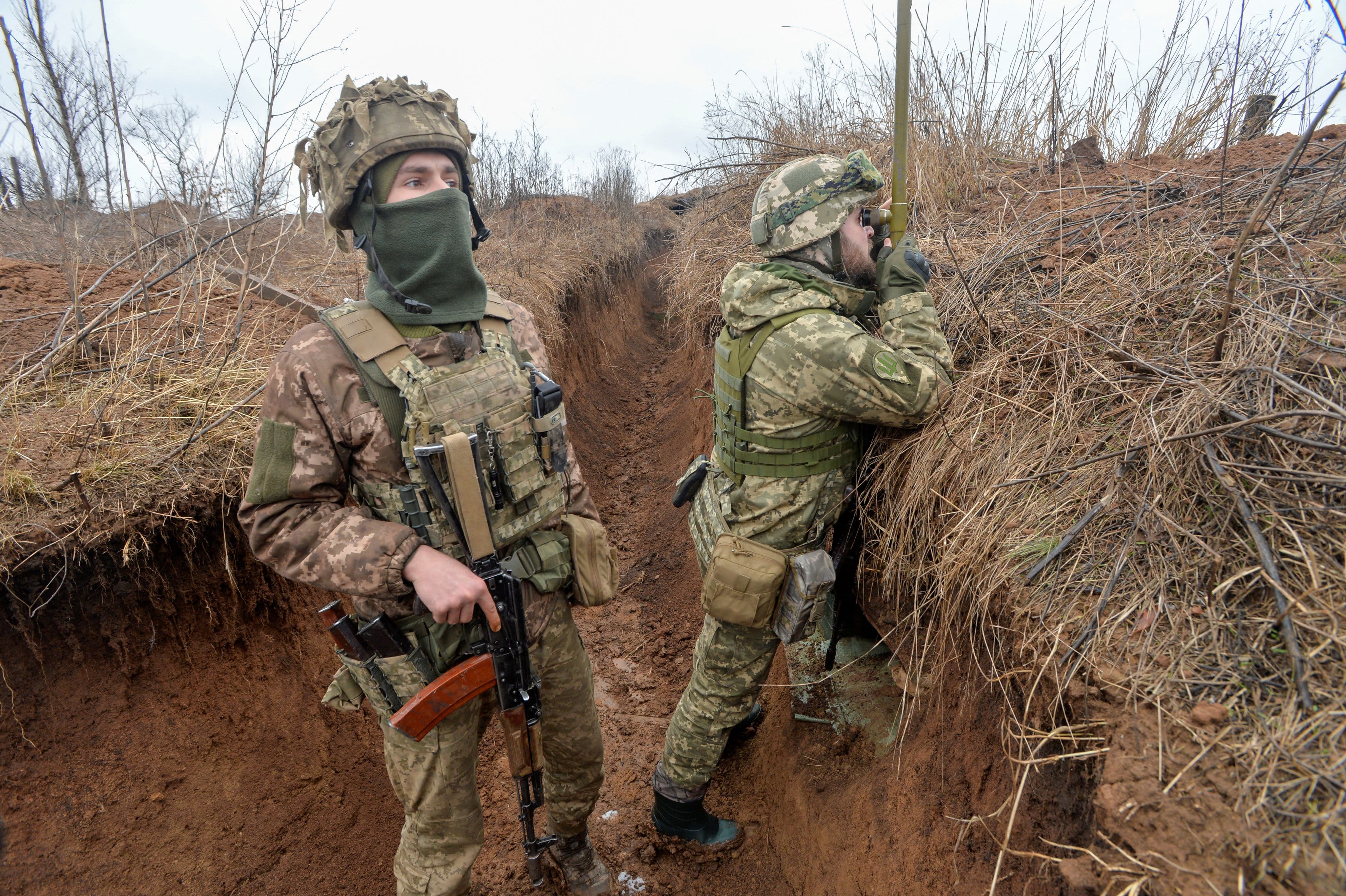 “Every indication we have is they’re prepared to go into Ukraine, attack Ukraine," Biden told reporters. He said the U.S. has “reason to believe” that Russia is “engaged in a false flag operationto have an excuse to go in," but did not provide details.

Biden also said he had no plans to speak soon with Russian President Vladimir Putin.

Even without an attack, the sustained Russian pressure on Ukraine has further hobbled its shaky economy and left an entire nation under constant strain. Eastern Ukraine already has been the site of fighting since 2014 that has killed 14,000, and tensions soared again Thursday.

Ukraine disputed the claim, saying separatists had shelled its forces but they didn’t fire back. The Ukrainian military command said shells hit a kindergarten in Stanytsia Luhanska, wounding two teachers, and cut power to half the town.

The head of the monitoring mission for the Organization for Security and Cooperation in Europe, Yasar Halit Cevik, said it reported 500 explosions along the contact line from Wednesday evening to Thursday. Cevik told the Security Council the tensions then appeared to ease, with about 30 blasts reported, adding “it is critically important to de-escalate immediately to avert further escalation of the situation.”

Russian-backed rebels and Ukrainian forces traded accusations that each had fired across the ceasefire line in eastern Ukraine, raising alarm at a time when Western countries have warned of the possibility of a Russian invasion any day.

Ukrainian President Volodymyr Zelenskyy tweeted that the kindergarten shelling “by pro-Russian forces is a big provocation.”

Kremlin spokesman Dmitry Peskov countered with the same: ”We have repeatedly warned that the excessive concentration of Ukrainian armed forces in the immediate vicinity of the line of demarcation, coupled with possible provocations, could pose a terrible danger.”

A 2015 deal brokered by France and Germany helped end the worst of the fighting, but regular skirmishes have continued and a political settlement has stalled.

Western powers scrambled to avert, or prepare for, eventual invasion.

NATO's defense ministers discussed ways to bolster defenses in Eastern Europe, while EU leaders huddled over how to punish Russia if it invades. Blinken and Vice President Kamala Harris are among political, military and diplomatic leaders heading to the annual security conference in Munich that will see urgent consultations on the crisis.

“We’ve seen some of those troops inch closer to that border. We see them fly in more combat and support aircraft,” he said. “We see them sharpen their readiness in the Black Sea. We even see them stocking up their blood supplies. You don’t do these sort of things for no reason, and you certainly don’t do them if you’re getting ready to pack up and go home.”

British Defense Secretary Ben Wallace said the West has seen "an increase of troops over the last 48 hours, up to 7,000." That squared with what a U.S. administration official said a day earlier.

Russia says the pullout, announced earlier this week, will take time. Russian Defense Ministry spokesman Maj.-Gen. Igor Konashenkov said Russian tank and infantry units holding drills in the Kursk and Bryansk regions neighboring Ukraine were returning to their bases in the Nizhny Novgorod region. He said some already were back after a 700-kilometer journey.

Troops on maneuvers in Crimea, which Russia annexed from Ukraine in 2014, have moved back to Russia's North Caucasus, he said, and Russian troops in Belarus will return to their garrisons after war games end Sunday. Konashenkov didn't mention how many were deployed and didn't say how many returned.

NATO, meanwhile, has moved troops and military equipment into Eastern Europe in a display of resolve meant to deter any Russian aggression and underline its intent to defend NATO’s eastern members in the unlikely event that they too become a target.

The U.S. has started deploying 5,000 troops to Poland and Romania. Another 8,500 are on standby, and some are expected to move toward Bulgaria. Britain is sending hundreds of soldiers to Poland, offering more warships and planes, and doubling its personnel in Estonia. Germany, the Netherlands and Norway are sending troops to Lithuania. Denmark and Spain are providing jets to police the Baltic Sea region, and Spain also deployed some to Bulgaria.

Russia held out a new offer of diplomacy Thursday, handing the U.S. a response to offers to engage in talks on limiting missile deployments in Europe, restrictions on military drills and other confidence-building measures.

The response, released by the Foreign Ministry, deplored the West’s refusal to meet the main Russian security and demands and reaffirmed that Moscow could take unspecified “military-technical measures” if the U.S. and its allies continue to stonewall its concerns.

At the same time, it said Russia was ready to discuss limits on missile deployments, restrictions on patrol flights by strategic bombers and other confidence-building steps.

Meanwhile, Russia ordered the deputy chief of mission at the U.S. Embassy in Moscow, Bart Gorman, to leave the country, in what the State Department called an “unprovoked” move. Russia said it was in response to the expulsion of a Russian diplomat. It appeared more linked to an ongoing U.S.-Russia battle over diplomatic staffing in Washington and Moscow than to Ukraine.