The unusual seismic activity and strong aftershocks have delayed recovery efforts, caused a spike in people staying in government shelters and unleashed panic

The U.S. Geological Survey said the quake hit 8 miles (13 kilometers) south of Indios at a shallow depth of 6 miles (10 kilometers).

There were no immediate reports of injuries.

It was the strongest shake yet since a magnitude 6.4 quake struck before dawn on Tuesday, knocking out power across the island and leaving many without water. More than 2,000 people remain in shelters, many fearful of returning to their homes, and others unable to because of extensive damage.

The tremors follow days of uncertainty and aftershocks throughout the island.

A new community has popped up in this earthquake-damaged town in southwest Puerto Rico: it houses 300 people, a dozen police officers and one macaw.

Cries of “Uno!” filled the air early Friday morning as children on cots played card games while men with a pillow under their arm and sleep in their eyes went to work. Many families in this dusty baseball park converted into a makeshift outdoor shelter live nearby. But they can’t or won’t return home because their walls are cracked, their houses have collapsed or they’ve been indefinitely evacuated after a 6.4-magnitude earthquake that prompted U.S. President Donald Trump to declare an emergency in the U.S. territory.

Hundreds of thousands of Puerto Ricans are still without power and water, and thousands are staying in shelters and sleeping on sidewalks since Tuesday’s earthquake. The tremor killed one person, injured nine others and damaged or destroyed hundreds of homes and several schools and businesses in the island’s southwest region.

The unusual seismic activity and strong aftershocks have delayed recovery efforts, caused a spike in people staying in government shelters like the one in Guayanilla and unleashed panic among thousands of Puerto Ricans. 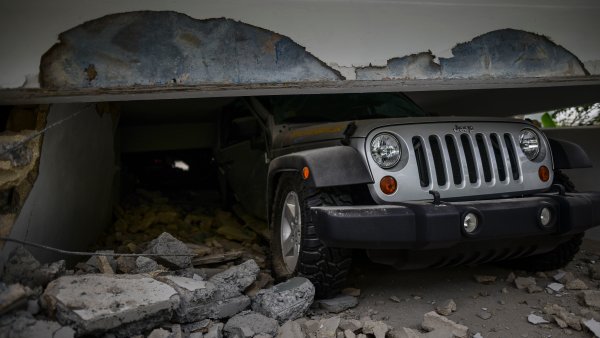 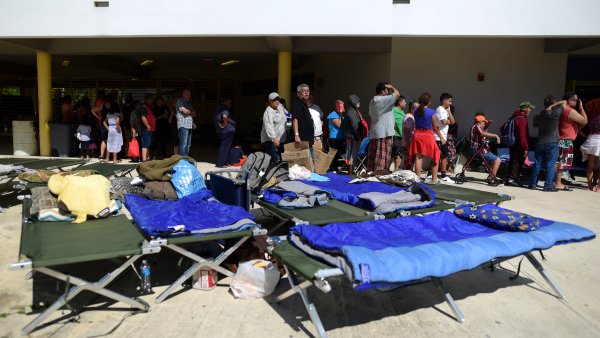 How to Help Puerto Rico After Deadly Earthquake

“I've reached the point where I'm getting on my knees in the street to pray, and I'm even listening to Christian music,” said Irma Vega, a 45-year-old caretaker for the elderly. “It's been 20 years since I've worshipped."

Another aftershock of 4.36-magnitude hit before dawn, causing people in the shelter to yell, “It's shaking! It's shaking!” as some sat upright in their cots. The quakes have also damaged government buildings, including a maximum-security prison in the nearby southern coastal city of Ponce, where officials relocated nearly 200 inmates for their safety.

The ground in southwest Puerto Rico has been shaking since Dec. 28, with more than 1,100 earthquakes, of which 96 have been felt and 66 were of a magnitude 3.5 or greater, according to the island's Seismic Network.

Gavin Hayes, with the U.S. Geological Survey, said the most likely scenario is that aftershocks will continue to decrease in frequency for the next 30 days.

Meanwhile, government officials are trying to calm and distract people by turning some shelters into a makeshift community. At the baseball park in Guayanilla late Thursday night — the town’s largest one — volunteers played the movie “Dinosaur,” for a dozen small children who sat enraptured and cross-legged as generators roared in the background and the elderly nestled under blankets in the chilly air and tried to sleep.

Nearby, older children kicked up dust as they chased each other on bicycles, prompting volunteers to yell, “Watch out!”

People still trickled into the baseball field close to midnight, including 74-year-old Lydia Ramos. She dragged a small suitcase with her right hand and carried her 10-year-old Chihuahua, “Princess,” in her left as the dog snuggled into a pink blanket.

“Find me a little cot,” she told volunteers as she recounted the recent nights at home. “My home is shaking from side to side... I'm even scared to take a shower... I'm so ready to leave."

Ramos spent the night on an army green cot and left early Friday morning for New York to temporarily stay with her son. But for those who cannot afford to fly to the U.S. mainland, the future is uncertain.

“I don't know what we're supposed to do,” said 27-year-old Eddie Caraballo as he walked around with a small speaker playing reggaeton to cheer himself up. “They evacuated all of us. All of us."

Among the 300 people staying in Guayanilla’s largest shelter was its mayor, Nelson Torres. He said two bridges are cracked and five of the town’s seven schools that serve some 2,500 students are seriously damaged. Other schools in the region also were damaged, prompting Puerto Rico's education secretary to announce Friday that classes in schools that have passed inspections would start Jan. 22, two weeks later than usual. In addition, Torres said 51 homes collapsed and another 19 are too dangerous to live in, and hundreds of other families whose homes were not damaged are still living in shelters regardless.

“We have a problem here,” he said. “People don't want to return home.”

As a full moon rose over Puerto Rico overnight, the smell of mosquito repellent filled the air and the shelter in Guayanilla grew quiet except for the occasional crunch of footsteps on the blue tarps covering parts of the baseball field.

It’s the same type of tarp that Carmen Orengo, a 67-year-old shelter refugee, had on her home for a year after Hurricane Maria hit Puerto Rico in September 2017 as a Category 4 storm, killing an estimated 2,975 people in the aftermath and causing more than an estimated $100 billion in damage.

“I lost everything in the hurricane,” she said as she paused and sighed: “Only to go through the same thing again.”