‘Yo, the Car's on Fire. Get Him Out': Police Officer Saved After Crash in North Philadelphia

A nine-year veteran of the Philadelphia Police Department is recovering after he was saved from a wreck Thursday night, moments before his patrol vehicle exploded into flames.

Officer Matthew Smythe, 30, suffered a fractured spine, a fractured hip and a broken nose in the crash into an overpass at 12th and York streets in North Philadelphia, family and officials said.

Cellphone video captured the dramatic images as onlookers willed other officers to rescue Smythe from the burning wreckage. 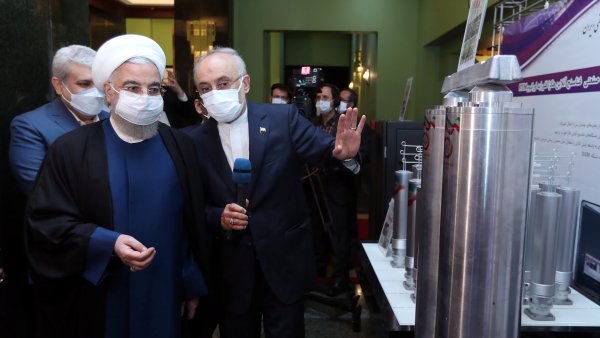 Talks ‘Intensify' on Bringing US Back to Iran Nuclear Deal

"Yo, the car's on fire. Get him out. Get him out," shouts Alex Ruffin, who was one of the first witnesses at the scene and watched as officers tried to free a bloody Smythe.

"I was just in shock. I was shaking," Ruffin said.

Fellow officers were able to pull Smythe out and drag his body away as flames began to consume the cruiser. Soon after, a loud bang could be heard from the front end of the vehicle as more fire erupted.

Smythe was rushed to Temple University Hospital for treatment of his injuries. But, his mother said, it appears he avoided paralysis.

"I'm just happy he's alive," Nancy Smythe said outside the hospital a couple of hours after the accident, which occurred about 4 p.m. as the officer responded to a report of a person with a gun.

Smythe is now recovering at the hospital, where he is listed in stable condition.