EXPLAINER: a Look at What's Behind the Protests in Canada

For five days, a blockade of pickups, cars and a handful of commercial trucks has choked off traffic at the Ambassador Bridge, the busiest border crossing between Canada and the United States. There are blockades at two other crossings as well. And for two weeks, downtown streets in Canada's capital have been snarled by a convoy of semis and other vehicles as protesters rail against COVID-19 restrictions and Prime Minister Justin Trudeau.

Here's a look at the ongoing protests that have gripped Canada, disrupting international commerce and prompting Washington to pressure Ottawa to end the border siege.

HOW DID THE PROTESTS START?

Much of it can be tied to anger against Trudeau, a Liberal Party politician who has been prime minister since 2015 and is loathed by many conservatives, particularly in the western province of Alberta, the most conservative in the country.

In 2019, well before the current protests, demonstrators drove a convoy of hundreds of trucks from western Canada to Ottawa in opposition to the Trudeau government's new carbon tax, an environmental measure they said would hurt the oil industry. Many wore yellow vests in solidarity with a French protest movement that same year against perceived economic injustice.

This year's “freedom convoy” began in January with the first vehicles also setting out from the western part of the country and protesters from elsewhere joining in. 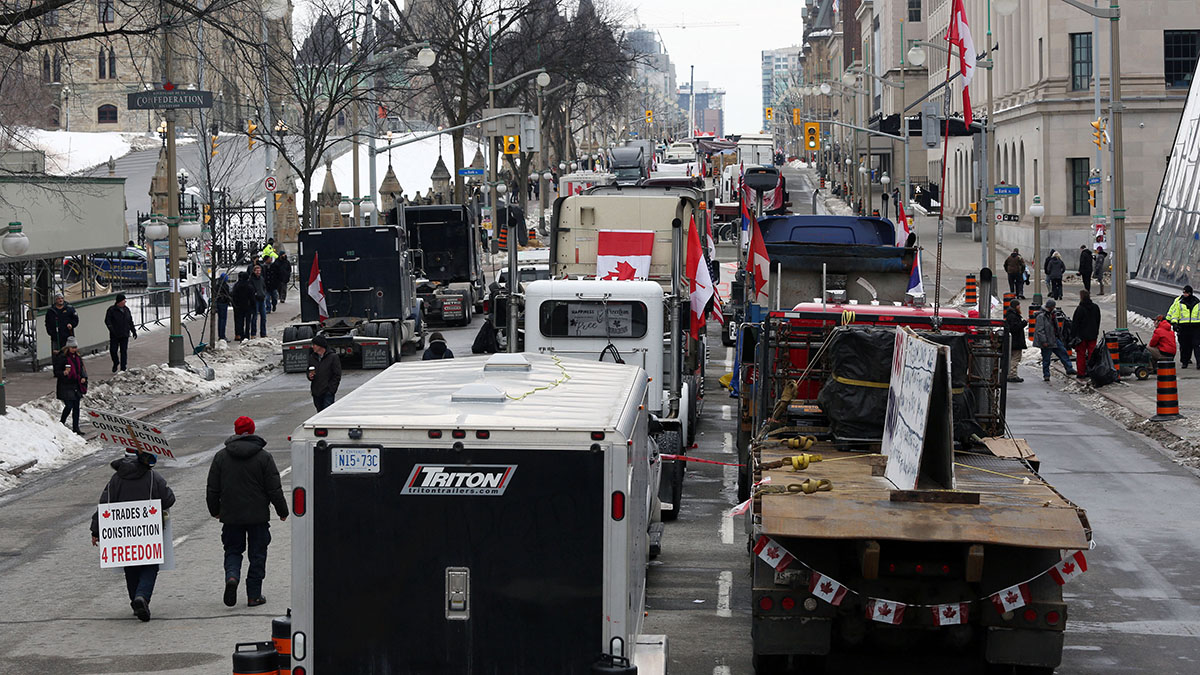 Canadian Judge Orders an End to Blockade at Border Bridge

WHAT DO THEY WANT?

Convoy organizers said they were moved to protest by a federal government requirement that truck drivers be fully vaccinated if they want to avoid a 14-day quarantine upon re-entry from the United States. However it's a bilateral measure with the U.S. imposing the same rule on Jan. 22 — meaning that even if Canada ended the restriction, it would make no practical difference.

The demonstrators in Ottawa, Ontario and elsewhere are primarily demanding an end to all COVID-19 vaccine mandates and other restrictions including mask requirements — though most of those were put in place by provincial governments. Protesters have called, too, for Trudeau’s resignation.

The “freedom convoy” was announced in early January by a group called Canada Unity, which was founded by James Bauder, a supporter of the QAnon conspiracy theories. Also involved are Tamara Lich, who previously belonged to the far-right Maverick Party, which calls for western Canada to become independent; and a former member of Trudeau’s Royal Canadian Mounted Police security detail.

Few actual commercial trucks are a part of the blockade at the Ambassador Bridge. Ontario Premier Doug Ford said Friday that the last count he had was five of them there, with the rest being personal cars: “Ninety-nine percent of the truckers are working their backs off. ... This is about a political statement, that's what this is about.”

Some far-right figures appear to be trying to capitalizing on the protests and pandemic fatigue to try to revitalize their movements, which represent a small minority of Canadians.

WHAT HAS THE RESPONSE BEEN?

Trudeau has stood firm against lifting vaccine mandates, calling the protesters a “fringe” who believe in conspiracy theories and wear “tinfoil hats.” That has only incensed them further.

The protests have also been widely condemned by truckers and trucking groups. That includes the Canadian Trucking Alliance, which says the vast majority of drivers are fully vaccinated, in line with the country's broader population.

Pandemic restrictions have been far stricter in Canada than in the United States, but Canadians have largely supported them. The country has less hospital capacity, so provinces have been quick to impose lockdowns when infections rise. Canada's COVID-19 death rate is one-third that of the United States.

In the United States, the protests have been cheered and promoted by Fox News personalities and former president Donald Trump, who issued a statement attacking “the harsh policies of far left lunatic Justin Trudeau who has destroyed Canada with insane COVID mandates.” Texas Sen. Ted Cruz has called the truckers “heroes” and “patriots,” and Tesla billionaire Elon Musk also tweeted his support.

Spanning the Detroit River between Detroit and Windsor, Ontario, the suspension bridge accounts for a whopping 25% of all trade between the two countries, with $328 million (417 million Canadian dollars) in goods crossing each day.

The bridge is critical to the food sector in both countries as well as the auto industry; with crossings all but shut down, shortages have forced plants on both sides of the border to go offline or operate at reduced capacity.

On Friday, a judge ordered protesters at the bridge to end the blockade and police warned that people blocking the streets could be subject to arrest and have their vehicles seized.

Premier Ford has declared a state of emergency that would allow penalties of up to a year in jail and fines of about $80,000 (100,00 Canadian dollars) for anyone impeding the movement of goods, people and services along critical infrastructure.

On Friday, Feb. 11, a Canadian judge ordered protesters at the Ambassador Bridge on the U.S.-Canadian border to end the 5-day-old blockade that has disrupted the flow of goods across borders and impacted the auto industry in both nations.

Thousands of protesters initially descended on the city two weeks ago. Their numbers have declined, but more than 400 trucks remain parked in front of the Parliament Buildings along with a makeshift kitchen.

Demonstrations have largely been peaceful but offensive to many Canadians. Some protesters parked and urinated on the National War Memorial, and Confederate flags and swastikas have been seen. A statue of Terry Fox, a national hero who set off on a fundraising trek across Canada after losing a leg to cancer, was draped with an upside-down Canadian flag and a sign reading, “mandate freedom.” Many protesters carry signs or flags with obscene insults referencing Trudeau.

Ottawa Mayor Jim Watson declared a state of emergency last week, saying the protests posed a threat to residents’ safety as many were being harassed. Locals complained about the nonstop honking of horns, but after a court injunction was obtained, that noise has dissipated.