Donna Summer's influence on dance culture and modern music lives on far beyond the days of disco.

Disco. Donna. Diva. Three words that summed up an era and the woman who helped shape it.

LaDonna Andrea Gaines -- whom you know as Donna Summer -- was born in Boston, Mass., and raised on gospel music. But it’s her pulsing dance club anthems “Love to Love You Baby,” “Last Dance” and “Hot Stuff” that defined the musical landscape of the latter part of the 1970s and early 1980s, and informed a generation of female artists that followed.

“‘Love to Love You Baby’ was kind of a paradigm shift, if you will, in music,” said Meredith Rutledge, assistant curator of the Rock & Roll Hall of Fame, to which Summer has been twice-nominated. “It really made a statement that was undeniably sexual but female and feminine, and yet still powerful at the same time. Not in any way shy or ashamed. It really redefined dance music and brought female sexuality to the forefront in a way that had not been addressed before.

“Today, we wouldn’t have Rihanna or Mariah Carey if weren’t for an artist like Donna Summer,” says Rutledge. 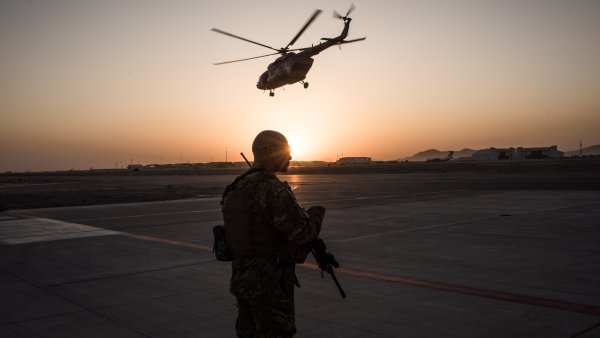 Before US Pullout, Watchdog Warned of Afghan Air Force Collapse

Featuring ecstatic moans and breathy vocals, 1975’s “Love to Love You Baby” pushed disco to the foreground of popular culture, taking with it much of the gay and clubbing subculture that had spawned the musical genre. In various forms – one version lasted 17 minutes – it ruled the charts and helped usher disco into the mainstream.

With its four-on-the-floor beat paired with soaring vocals, disco (a sound influenced by funk, Latin and soul music) was a perfect vehicle for Summer’s mezzo-soprano voice. Alongside the Bee Gees, Gloria Gaynor, The Village People and Chic, Summer went on to dominate the charts with hits such as “I Feel Love,” “Last Dance” and “MacArthur Park.” Successes that earned her the title of “Queen of Disco,” a moniker she would never outgrow despite career forays into R&B, country, rock, jazz, Broadway, and gospel.

In his book “This Is Uncool,” BBC music critic Garry Mulholland wrote, “On the radio, ‘I Feel Love's’ insistent ethereality smothered the orchestral funk of U.S. disco and stood out so completely you found yourself riveted by its awe and its glowing ache. On the dance floor, the effect was even more profound.”

The singer, who spent the early years of her career living in Germany following a stint in the European tour of “Hair,” did, pun intended, work hard for her money. “Love to Love You Baby” was the first of 19 number one dance hits she had between 1975 and 2008.

Summer, who died at 63 Thursday, went on to win five Grammy awards, six American Music Awards and charted three platinum albums during her career, influencing scores of artists who would follow.

And while disco may have died out, Donna Summer’s musical influence lives on. As recently as 2005, Madonna featured an almost identical baseline to “Love to Love You Baby” on her single “Future Lovers” from the album “Confessions on the Dance Floor,” which drew heavily on the look and sound of the heady days of New York's dance clubs such as Studio 54 and Loft. Madonna tweeted “Rest in Peace” following the news of Summer’s passing and included a link to a live performance of “Future Lovers.”

As a child growing up in Cleveland, Ohio, Rutledge remembers first seeing Summer on “The Midnight Special” television variety show. “I had only heard her on the radio before and I was struck by her beauty and her vocal prowess – really none of the records I had heard had actually prepared me for the kind of pipes that she had,” said Rutledge. “And the way that she really sort of owned the stage. You could see what a presence she was.”

Summer was a diva onstage (and off according to many reports). “Arms flung wide, blowing kisses like confetti, Donna sashays around the stage in glittering costumes, exhorting the audience ("You are beautiful"), joshing the band, trading a little prefabricated bitchiness with her backup singers who undulate at sharp angles like clockwork Nefertitis when Donna wraps herself around a lyric,” was the description given to her live performance in a 1978 Time magazine article.

Following the release of her chart-topping greatest hits album set in 1979, Summer wanted to branch out musically. The result was “The Wanderer,” on which she replaced disco with the burgeoning sound of new wave. The pop-rock mega-hit, “She Works Hard for the Money,” was released in 1983. She was now a contemporary of Pat Benatar.

In the mid-1980’s the public’s desire for disco was sated, and Summer found herself in the headlines for non-musical associations. Alleged anti-gay remarks regarding the then relatively new disease AIDS had a negative impact on her career as angry fans (including many gay men who had initially championed her during the disco era) returned her albums in the thousands. Summer denied she made the remarks calling it a “terrible misunderstanding” in a 1989 letter to the AIDS campaign group Act Up.

Throughout the 1990s and into the 21st century Summer continued to produce new music. While remaining a fixture on Billboard’s top-10 dance chart, mainstream chart success was elusive. On the 2008 release “Crayons,” Summer made fun of her own history with “The Queen is Back,” a reference to her disco title. The same year she sang during the finale of “American Idol” on television and in 2010 appeared as a guest performer on “America’s Got Talent."

In the 1978 Time article, Summer remarked, “The furor over ‘Love to Love You Baby’ was certainly good for my bank account, but it gave me a one-sided image as a sex queen. But a person is not one thing.” She lived up to that statement in her music. Her voice remained big and bold throughout her career and while the Queen may now be dead, her influence on dance culture and the R&B sound will continue to reign.