Despite Pressure, Biden Could Hold Off on Federal Climate Emergency Declaration

The focus on climate action comes amid a heat wave that has seared swaths of Europe, with Britain reaching the highest temperature ever registered in a country ill-prepared for such weather extremes

President Joe Biden will travel to Massachusetts on Wednesday to promote his efforts to combat climate change but may stop short of issuing an emergency declaration that would unlock federal resources to deal with the issue, according to a person familiar with the president's plans.

Biden has been under pressure to issue an emergency declaration after Sen. Joe Manchin, D-W.Va., pulled out of negotiations over climate legislation. During his visit to Somerset, Mass., Biden could announce other steps on climate change but the White House has not released details.

The president has been trying to signal to Democratic voters that he’s aggressively tackling global warming at a time when some of his supporters have despaired about the lack of progress. He has pledged to push forward on his own in the absence of congressional action. 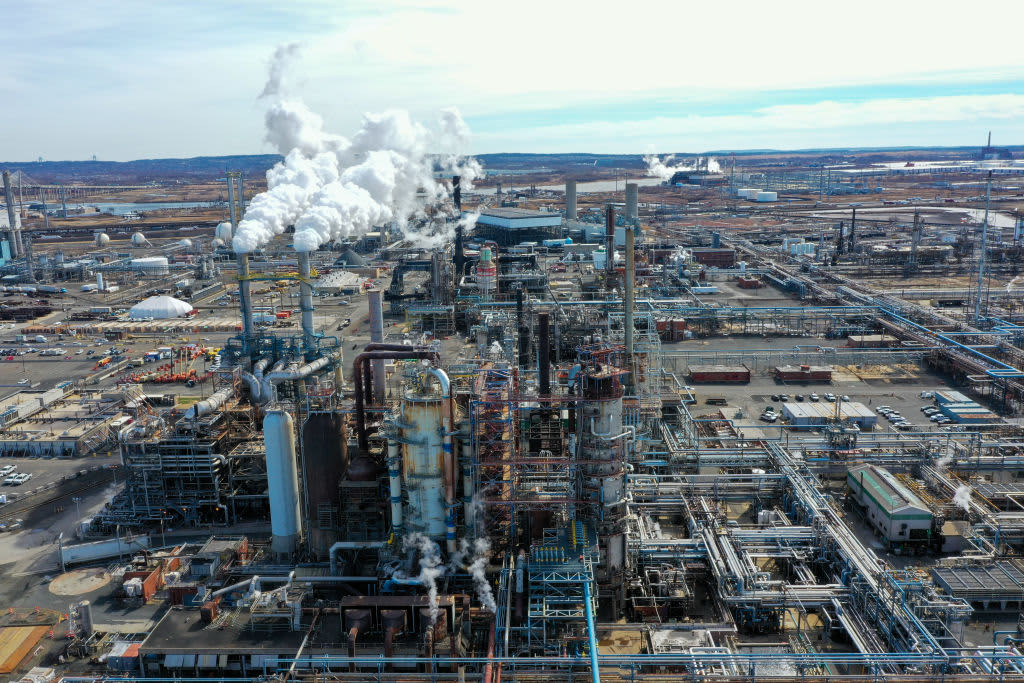 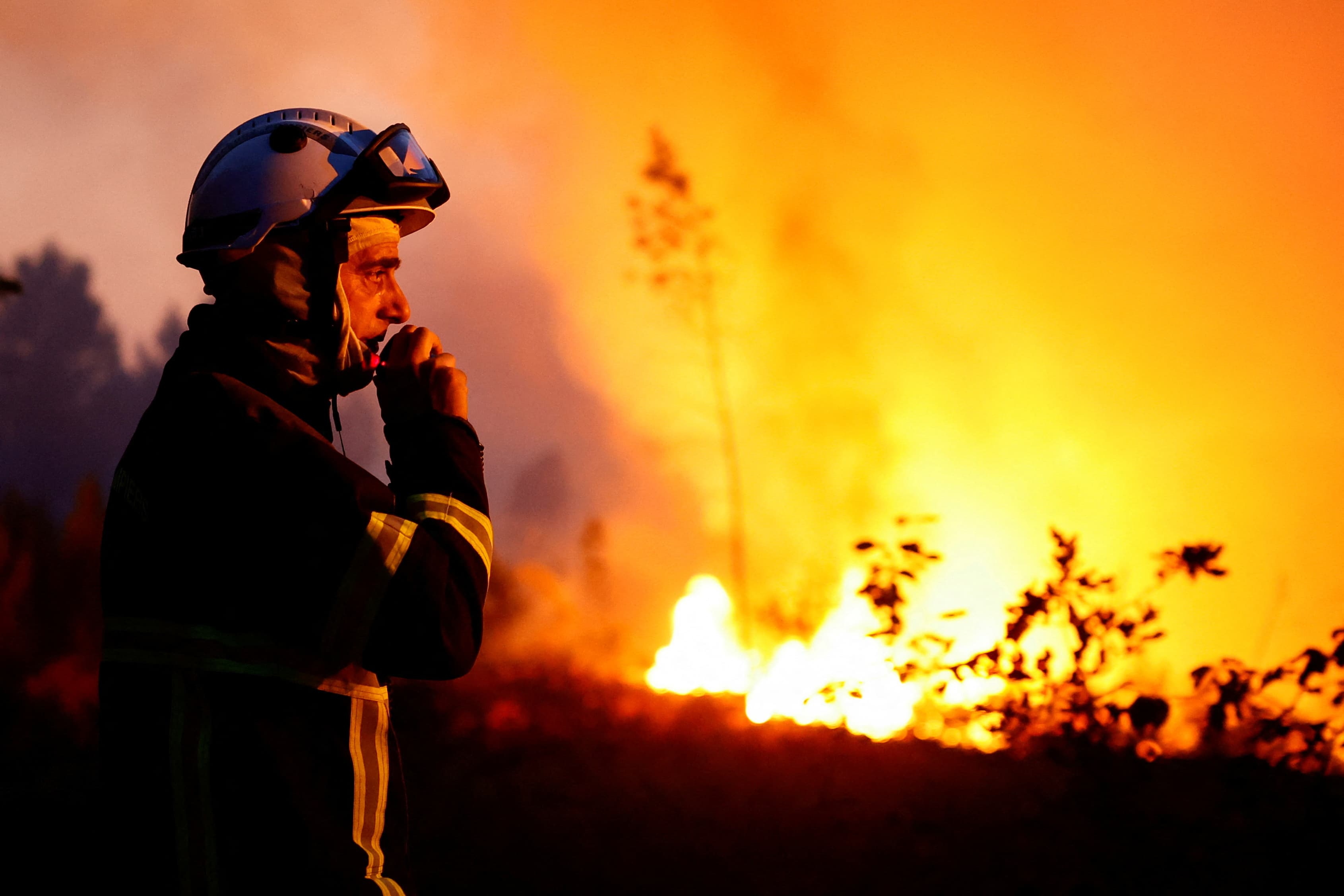 Declaration of a climate emergency would be similar to one issued by former President Donald Trump boosting the construction of a southern border wall. It would allow Biden to redirect spending to accelerate renewable energy such as wind and solar power and speed the nation’s transition away from fossil fuels such as coal, oil and natural gas. The declaration also could be used as a legal basis to block oil and gas drilling or other projects, although such actions would likely be challenged in court by energy companies or Republican-led states.

The focus on climate action comes amid a heat wave that has seared swaths of Europe, with Britain reaching the highest temperature ever registered in a country ill-prepared for such weather extremes.

The typically temperate nation was just the latest to be walloped by unusually hot, dry weather that has triggered wildfires from Portugal to the Balkans and led to hundreds of heat-related deaths. Images of flames racing toward a French beach and Britons sweltering — even at the seaside — have driven home concerns about climate change.

The president vowed late last week to take robust executive action on climate after Manchin — who has wielded outsized influence on Biden’s legislative agenda because of Democrats’ razor-thin majority in the Senate — hit the brakes on negotiations over proposals for new environmental programs and higher taxes on the wealthy and corporations.

One of the biggest backers of fossil fuels within the Democratic caucus, Manchin has blamed persistently high inflation for his hesitation to go along with another spending package. His resistance has enraged other congressional Democrats who have ramped up pressure on Biden to act on his own on climate.

“I think given the global crisis that we're facing, given the inability of Congress to address this existential threat, I think the White House has got to use all of the resources and tools that they can,” said Sen. Bernie Sanders, I-Vt. On a climate emergency, “that's something that I've called for, a long time ago.”

For small tourism businesses across the U.S., climate change is fundamentally shifting the experiences and sites they’re able to offer clientele. “We’re seeing ski destinations without snow in the winter, we’re seeing beaches increasingly eroded,” says Expedia’s VP of sustainability, Aditi Mohapatra. “So there’s the kind of physical manifestations of climate change that are having a real impact on destinations.”

Biden, who served in the Senate for more than three decades, "has been chained to the legislative process, thinking about his past as a senator,” Sen. Jeff Merkley, D-Ore., said at a news conference Monday night. “Now he’s unchained, and he has to go.”

“If he’s going to make good on his commitments to do everything he can to bring emissions down, he’s got to pay attention to those critical regulatory issues that are facing him,” said Podesta, a former climate counselor for President Barack Obama.

Ben King, an associate director at the Rhodium Group, an independent research firm, said the United States is “nowhere close” to meeting ambitious goals set by Biden for reducing emissions.

Biden escalated the country’s emissions reduction target to at least 50% below 2005 levels by 2030. Under current policies in place at the federal and state level, the U.S. is on track to reach a reduction of 24% to 35%, according to the Rhodium Group’s latest analysis.

Summers are getting hotter each year in the U.S., with warming increasing the fastest in the western and southwestern parts of the country. Climate change is making extreme weather events more intense and more frequent, whether they are droughts or heat, explains NBC 5 meteorologist Samantha Davies. She joined LX News Now to discuss the Texas heat.

“Absent meaningful policy action, we’re far off track from meeting the goals that the U.S. is committed to under the Paris accord,” King said, referring to a 2015 global conference on addressing climate change.

Even as Democrats and environmental groups pushed Biden to act on his own, some legal scholars questioned whether an emergency declaration on climate change is justified.

“Emergency powers are designed for events such as terrorist attacks, epidemics and natural disasters,’’ said Elizabeth Goitein, co-director of the liberty and national security program at the Brennan Center for Justice at New York University School of Law.

Such powers “aren’t intended to address persistent problems, no matter how dire. And they aren’t meant to be an end-run around Congress,’’ Goitein wrote in a op-ed for The Washington Post last year.