The skepticism in the rooms was palpable when U.S. Army leaders met with soldiers at Fort Hood, Texas, in recent days, to check in on the embattled base, which has been stricken with violence and eroded morale over the past year.

There were nervous looks, shakily raised hands and questions about whether any changes for the good might just disappear in a few months.

“I feel like leaders are just checking off boxes,” one male soldier said Thursday, as Army Sgt. Maj. Michael Grinston, the top enlisted officer, visited the base on a listening tour. Another soldier told him: “I have no idea what your true intentions are.”

For Grinston, the distrust was the most discouraging part of his daylong effort to meet with a range of soldiers, from new recruits to senior leaders.

“I think we’ve lost some trust. And, you know, we’re trying to rebuild that trust,” he said in an interview with the Associated Press, as he was heading back to Washington, D.C.

While authorities haven’t confirmed the identity of remains found Tuesday, the family of the missing Fort Hood soldier said Wednesday Vanessa Guillen’s body had been found. “My sister's no joke, “ said Lupe Guillen, the soldier’s sister. “My sister's a human being. And I want justice.”

More than two dozen Fort Hood soldiers died in 2020, including multiple homicides and suicides. The death of Vanessa Guillen, whose remains were found in July, triggered a social media movement of former and current military service people speaking out about sexual assault and harassment on the base. Investigators say Guillen was slain by a fellow soldier her family says harassed her.

Her death and other violence and problems at the base prompted a series of reviews, culminating in an independent report released in December that highlighted high rates of assault, harassment, leadership problems and issues with Fort Hood's criminal investigation division. Fourteen people were fired or suspended in connection to the findings. And leaders have begun to implement changes to improve morale and commanders' relationships with soldiers there.

Grinston's visit was aimed at checking in on the progress.

“What bothered me the most,” he said, “is, I think we’ve gained their trust. But they said, are we going to keep up the momentum? Are we going to do this? And they were skeptical.”

The AP was allowed to have a reporter in the room for several of Grinston's meetings with the soldiers, under an agreement that the soldiers would not be identified by name. The Army said that request was made due to concerns of retaliation.

Grinston, along with other Army leaders, met with dozens of soldiers. Most said the communication with their leaders has improved, more time and attention has been given to training, and exercises to build trust among teams are helping improve the mood.

But the distrust remained. At least half of the soldiers present during two sessions that the AP observed agreed that the push for improvement was a reaction to public outcry over high-profile deaths. 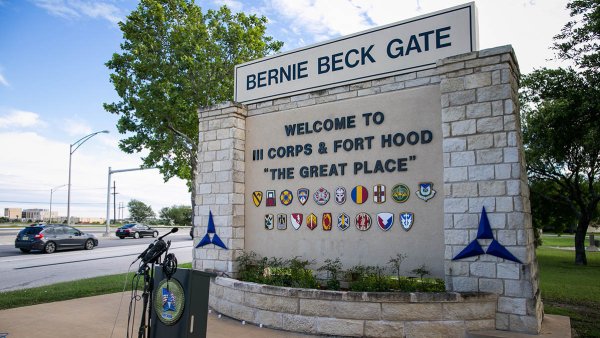 14 Fort Hood Soldiers Fired, Suspended Over Violence at Base

Commander Seeks to Get Embattled Fort Hood ‘Back on Track'

They said there is still not enough follow-up with counseling, and they are worried that things will go back to the way they were after public attention shifts.

Grinston said he was encouraged that soldiers believed things were heading in the right direction now, and that many were positive about their jobs and their fellow soldiers and commanders.

He said the soldiers he met with told him: “Don’t stop getting to know your soldiers. Don’t stop calling the families. Don’t stop doing small unit physical fitness. Do those team building events. We want to do more.”

He said he delivered those sentiments to the leaders and officers he met with.

He added that he wants soldiers "to trust that the Army is going to keep up this momentum.”

“We’ve got to maintain the momentum and keep their trust that we actually are going to keep doing this,” he added.

Sgt. Maj. Shane Munday, who assumed command of the 3rd Cavalry Regiment in December, said he recognizes the degree of distrust that remains and is working to meet with soldiers to “show them that I am here to take care of them.”

In October, Army officials announced a corps-wide initiative that aims to regain trust and address cultural problems. Sgt. Maj. Julie Guerra, an Army G-2 sergeant major at the Pentagon and one of the tri-chairs of the People First Task Force, which aims to make recommendations for improvement, was also present during the listening sessions. She said she was “disgusted” and “very discouraged” by the findings in the December report.

“I was discouraged that we had gotten to a point in our Army that there was a persistent and pervasive culture that soldiers did not feel safe inside their formations," Guerra said.

Guerra said the task force will be taking a “critical look” at the Army's Sexual Harassment/Assault Response and Prevention Program and a missing soldier policy has already been approved by the secretary of the Army.

A congressional investigation, which was initiated days after the Sgt. Elder Fernandes was found dead after being reported missing in August, is still pending. The investigation into Guillen’s death is ongoing.

Lolita C. Baldor reported from Washington, D.C. Acacia Coronado is a corps member for the Associated Press/Report for America Statehouse News Initiative. Report for America is a nonprofit national service program that places journalists in local newsrooms to report on undercovered issues.