Watching a Coup From Afar: Local Burmese People Worry for Family and the Missing

Burmese people in the U.S. are worried for their friends and families as the Myanmar military coup continues. From thousands of miles away, they are taking action.

When it's past bedtime on the East Coast, the latest stories and images from Myanmar light up the internet and spread around the world.

The latest blockade setup by protesters to block military vehicles. Calls for help for food and water, or phone access to evade the nightly internet shutoffs. And mourning the dead, as soldiers in the Southeast Asian nation have fired live rounds at demonstrators, according to multiple reports.

Thousands of miles away, Burmese people in the Philadelphia area are living days dominated by worry for their loved ones, while taking what action they can to help.

A Burmese Philadelphia-area resident who spoke to NBC10 asked to be identified under a pseudonym, Karuna, fearing military retaliation against relatives and friends back home. She is staying in touch with family back home as they try to locate her nephew, who disappeared amid the protests. (Activists have called for the military to stop "kidnapping" critics and protesters, and the United Nations estimates 1,000 people are missing or detained.)

"We don’t know where he is, where he was taken. As much as our family spent a lot of money just to trace him...it was hopeless. ... They don’t know,” Karuna said.

The coup began in February 1 this year in Myanmar, which the U.S. refers to as Burma, when the military suddenly took over the country's government and detained civilian political leaders. The U.S. and other nations have demanded the release of State Counselor Aung San Suu Kyi, whose National League for Democracy party had won several seats in recent elections and were about to be sworn in.

In recent days, the crackdown on protests has grown more violent, killing at least 38 people on Wednesday.

At the same time as getting in touch with relatives, there is news to keep up with. Speaking a day after the bloodiest day of the coup, Karuna was looking for answers. 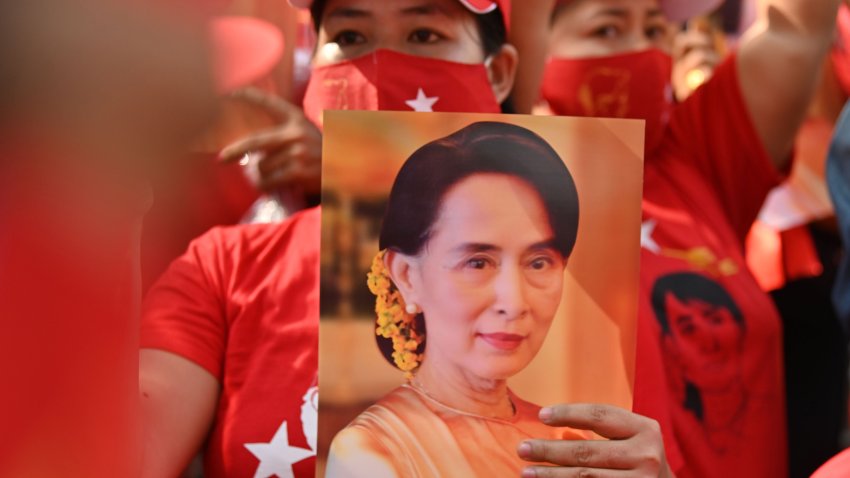 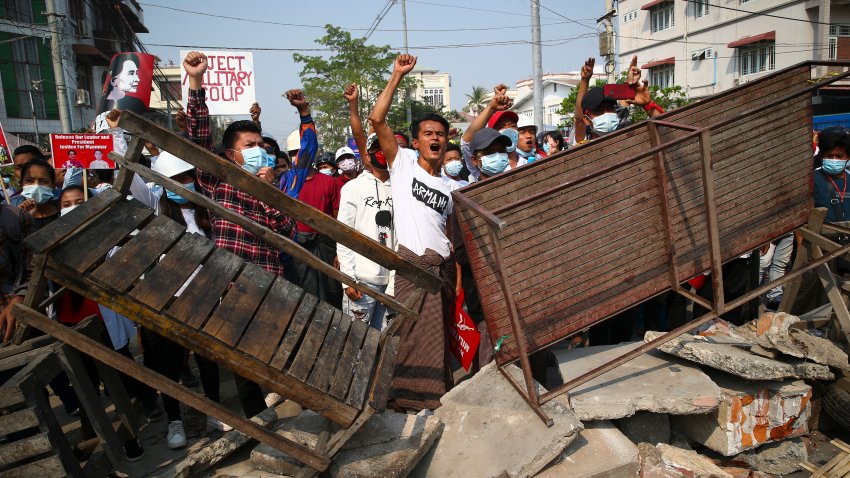 “More than half of them were like, my daughter’s age, 19, 20, that’s like really heartbreaking," she said. "Every time I talk about it I get chills. We’re just here thinking there should be justice, but who we turn to? The military, police, government? They are the ones who are hurting the public, the people.”

Staying up late to follow the events of the coup and protests is one thing. Other times there are calls or messages from scared friends.

Dim, another local resident, recently got a call from a friend sheltering indoors as tear gas went off outside. Dim asked not to be identified with her surname, sharing similar concerns to Karuna's.

"We went online...on a video call, and I saw the tear gas being exploded and then all this gas came over into residential houses, in their windows and doors," Dim said.

The friend and daughter weren't involved in the protests, but had to close the windows and doors, staying close to the center of the house to get away from the fumes.

It has not always been easy for friends and relatives to get in touch. On a recent night, the military suddenly shut off the internet, causing stress and panic.

"The whole night I could not sleep," Dim said. "I was like, oh my gosh I cannot contact my family members...and not just them, but my whole entire community of friends from Burma are shut off. What is going on? Is the military shooting them to death, or what?"

The Myanmar military now shuts off the internet each night.

So what can one in the U.S. do to help a family member living through the coup?

A group has demonstrated multiple times now near Independence Mall and the Liberty Bell, drawing a connection to the story of American democracy.

In a rally at that spot Saturday, demonstrators denounced the coup, calling for the violence to stop and demanding the release of political leaders including Suu Kyi.

State Senator Nikil Saval attended a demonstration last month, to call attention to "the difficulties people are going through, communicating with their family members, and knowing that it could become a fairly drastic situation."

Saval said Philly's Burmese community is largely visible in South Philadelphia, including in his Senate district. At Mifflin Square Park, he's often seen folks playing chinlone, a game similar to the Western "Hacky sack." Players kick around a ball, displaying flashy athleticism and dives to keep the ball in the air.

Though he's not able to legislate foreign policy from the state Senate, he wanted to lend support to his constituents getting the message out.

"The United States is a fairly self-absorbed country and people tend not to really know what's going on outside the borders. ...But a lot of the population has connections to other countries, certainly in South Philadelphia."

And a significant number of local Burmese people were feeling like it was 1988 all over again - when the country had huge protests, with many students involved, against the military dictatorship.

"There were a lot of memories of that in this," Saval said. "And it's just dispiriting actually after the country had achieved some measure of democratic control."

Some protesters have called for more sanctions on the military, among other more strict international action. There have been boycotts of local businesses whose owners are related to or descended from Myanmar military members.

Karuna said she has helped people get SIM cards from Thailand to stay in communication. Despite the shutdowns in Myanmar, phones may still be able to receive a signal from a neighboring nation's carrier.

And then there are the symbolic displays of support, including banging pots and pans at 8:30 a.m. EST, which is 8 p.m. in Myanmar. At that time, many take to the streets or their balconies to make some noise as a sign of protest.

"Some people are so angry they bang their pots and pans too much, and they're wrinkled up," Dim said. "Just before I start my work, just for a few minutes before 8:30 [a.m.], I bang some pots and pans."

Dim is a practicing Christian, but pointed out the banging pots and pans is also a connection to Buddhism, the dominant religion in the country. The noise from bells or drums is believed to ward off evil.

She would also occasionally post about this online to show support.