‘3 Pipes Turned into a Shotgun': Nearly 1-in-10 Guns Seized in Philly Are Homemade

Ghost guns, which are firearms sold in parts and assembled by buyers, have no serial numbers and require no license to purchase or own. A recent killing inside a Philadelphia office building involved three homemade guns, police said.

The Delaware man charged with shooting and killing a 25-year-old security guard at a Philadelphia office building last Friday used a homemade gun that consisted of little more than "three metal pipes that he turned into a shotgun," a police official told NBC10.

It was a "very strange" contraption, Chief Inspector Frank Vanore said in an interview Wendesday. He said he isn't surprised that the security guard didn't realize what the suspect was holding until it was too late.

"It could be mistaken for an umbrella, honestly," he said of the homemade firearm. "These parts are what they are, and then you snap them together and it’s gun."

It's the latest homemade gun seized by Philadelphia police in a year when hundreds of them have been recovered during criminal investigations. Most are what firearms experts refer to as "ghost guns," which are sold by gun manufacturers in parts and assembled at home by buyers.

The number of "ghost guns" recovered by Philadelphia police during criminal investigations has skyrocketed to 436 through Oct. 4 of this year, more than all the homemade guns seized in the city in 2019 and 2020 combined.

They are known as ghost guns because they are untraceable and unregulated, lacking serial numbers like normal firearms even though they are just as deadly once assembled after purchase.

Since the firearms are sold in separate pieces, they require no permit or license. It is legal because of loopholes in federal gun laws, which the U.S. Department of Justice is expected to close soon.

The term, ghost gun, likely rose during their initial rise in popularity about a decade ago in California -- followed by other states -- where assault-style rifles were first banned.

Firearms manufacturers, as well as startup companies, began selling ghost guns in response to local and state restrictions on certain types of assault-style weapons. A loophole in federal laws allows for pieces of guns to be sold to consumers without any regulations or serial numbers.

Those pieces can then be put together at home, which circumvents gun control measures including prohibitions against certain citizens who are not allowed to own a gun, according to Christian Heyne, vice president of policy at the Brady Campaign to Prevent Gun Violence.

"Ghost guns are one of these things where a few years ago when the problem first was being discussed, it was an issue that you could see the problem escalating and becoming a huge problem if we didn’t get ahead of it," Heyne said. "And now, it’s become a huge problem."

Heyne said that ghost guns emerged from stronger restrictions on assault-style firearms at the state and local levels across the United States, but their proliferation in recent years involved handguns.

"While it was horrifying to see people be able to build assault weapons and use them in mass shootings, what is now affecting the country on a whole is the handguns flying off the shelf," Heyne said. "It has grown exponentially."

In Philadelphia, City Council passed a law last year that banned ghost guns, but that hasn't stopped the huge year-over-year increase in their use in crimes, according to police statistics.

In 2019, city police seized 95 homemade guns, or Privately Made Firearms, as the PPD describes them. 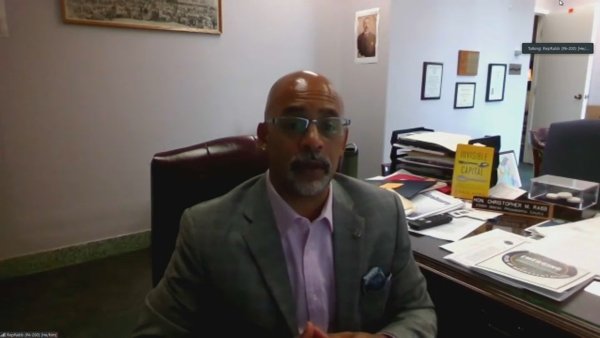 Parody Bill Proposing Vasectomies for Men 40 and Up Leads to Threats, Rep. Says

But the guns aren't limited to professionally made "receiver kits" in the mail anymore, as the killing of the young security guard showed. Instructions for building homemade guns can be found on the internet, experts say.

Law enforcement officials in some states, including Pennsylvania, are trying to halt the spread of ghost guns and other homemade firearms. But their efforts face challenges from gun groups and manufacturers.

"I have tried to regulate these like regular firearms so they would be trackable, they would be traceable and they would require a background check," Pennsylvania Attorney General Josh Shapiro said in an interview this week. "Right now, someone who is considered a prohibited purchaser can buy a ghost gun because it’s not considered a firearm under either our federal laws or our state laws. I’ve been pushing the Biden administration and the (Bureau of Alcohol, Tobacco and Firearms) to change that. They’re working through the process."