SWAT Officer Charged With Pepper Spraying Protesters on I-676

A Philadelphia SWAT Officer accused of pepper spraying protesters on a highway during mass demonstrations against racism and police violence has been charged with misdemeanor assault.

Officer Richard Paul Nicoletti faces three counts each of simple assault, recklessly endangering another person and official oppression, as well as one count of possession of an instrument of crime. All are misdemeanor charges.

“The complaint alleges that Officer Nicoletti broke the laws he was sworn to uphold and that his actions interfered with Philadelphians’ and Americans’ peaceful exercise of their sacred constitutional rights of free speech and assembly,” District Attorney Larry Krasner said in a statement. “The Philadelphia District Attorney’s Office will not make excuses for crimes committed by law enforcement that demean the democratic freedoms so many Americans have fought and died to preserve.”

Nicoletti is accused of spraying multiple peaceful protesters on June 1 after they walked onto Interstate 676 in Center City during widespread demonstrations following the death of George Floyd, a black man who died handcuffed after a white Minneapolis police officer knelt on his neck for nearly nine minutes in May. 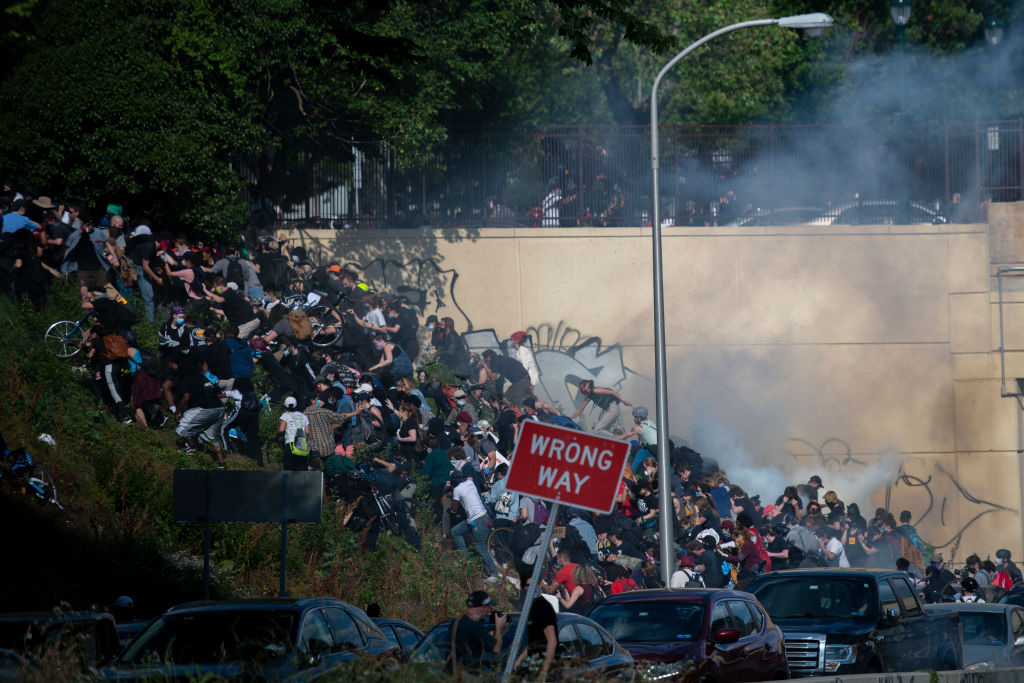 The use of force against protesters sparked national attention and later prompted an apology from both Philadelphia Police Commissioner Danielle Outlaw and Mayor Jim Kenney.

Nicoletti sprayed two kneeling protesters – pulling one's goggles down before spraying her again – before “violently” throwing a sitting protester onto his back and spraying him as well, Krasner said.

Mayor Jim Kenney said the decision was made based on faulty information from the scene on June 1. NBC10's Lauren Mayk reports.

“That police officer walked towards us, and that’s actually all I remember. I blacked out," said Katherine Miller, who was sprayed and is now a plaintiff in one of multiple lawsuits against the city.

Kevin Mincey, an attorney representing Miller and other plaintiffs, said Nicoletti was out to "exact revenge" and that his clients are now “dealing with the emotional distress that comes with experiencing something like this.”

John McNesby, the president of the Fraternal Order of Police Lodge 5 union, which represents law enforcement officers in the city, reacted angrily to the charges and took aim at Krasner, with whom he has frequently sparred.

“Krasner refuses to hold unlawful protesters accountable, those who set fire and looted our great city…His top priority is to push his anti-police agenda,” McNesby said in a statement. “This double-standard of justice is unacceptable to our brave police officers who work tirelessly to keep our city safe.”

Jane Roh, the spokeswoman for the District Attorney’s Office, refuted McNesby’s claim about a double standard and pointed to “hundreds” of charges against people accused of looting and violent crimes during the protests.

“John McNesby insults the majority of honest, decent officers with every new lie he tells,” she said.