Philadelphia Police released a sketch of a man who they say attacked and robbed several women throughout the city. They are also offering a $10,000 reward for information leading to his arrest.

Police say the suspect is responsible for 8 purse snatchings of women since January.

The latest incident took place Monday around noon. A 41-year-old woman arrived at her home on the 7500 block of Brookhaven Road in Philadelphia. Suddenly, police say, she was attacked by the suspect. A Good Samaritan managed to intervene and fight the man off but not before the man grabbed the woman's purse.

Police say the suspect also snatched another purse from a woman on Friday on the 7500 block of Brockton Road.

The same man is connected to six more incidents, according to officials.

The first incident took place on Jan. 8 around 9:10 a.m. on the 1300 block of Pennington Road, according to police. A 52-year-old woman was walking out of her home when police say she was approached by the suspect from behind. The suspect allegedly told the woman, “give me your bag or I will shoot you.” He then took her bag and fled the scene, according to police.

Police say the suspect struck again on Jan. 13 around 6 p.m. Barbara Tucker, 60, told police she was on her way to work and walking along the 7600 block of Brockton Road when the suspect approached her from behind and placed her in a choke-hold.

"He said, 'don't turn around or I'll shoot you, just give me the bag,'" Tucker said.

Tucker says the suspect then threw her to the ground and stole her groceries, purse, cell phone, Kindle fire, $100 in cash and her ID.

Tucker's eye was injured in the attack and the emotional pain remains as well.

"Being so close to home, it's hard," she said while in tears. "It's really hard."

On Jan. 21, around 7:19 p.m., the suspect allegedly approached a 35-year-old woman from behind while she was carrying her groceries on the 7500 block of Malvern Avenue. Police say the suspect pulled out a knife and demanded that she give up everything in her possession. 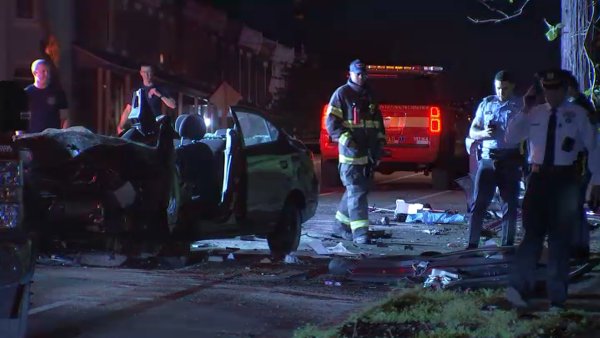 Police say the woman dropped her purse and fled into her home. The suspect then allegedly took the woman’s purse, ID, bank card, cell phone and $100 in cash.

The suspect’s fourth victim was a 51-year-old woman, according to police. The suspect allegedly approached her from behind on Jan. 24 around 7:15 a.m. while she was dropping off her grandchildren on the 6700 block of Lansdowne Avenue.

Police say he pulled out a knife and told her, “you don’t want anything to happen to these kids.”

He then allegedly grabbed the bottom of the woman’s bag and then lunged at her and the children. Police say the woman then let go of the bag and the suspect fled with it through a playground and into the woods. The stolen bag contained ID and credit cards, according to investigators.

That same day, shortly before 9 a.m., police say the suspect approached a 55-year-old woman who was walking towards a bus stop on the 1200 block of North 57th Street. The suspect allegedly pushed the woman from behind, grabbed her tote bag and then ran west through a park area. Police say the bag contained a Samsung tablet, HTC smart phone, small pocketbook, debit card, keys, chargers and identification.

Finally on January 29, around 6:30 a.m., police say the suspect approached a 28-year-old woman from behind as she was walking on the 7500 block of Lansdowne Avenue.

"I was screaming out, help me, help!" says the victim who did not want to be identified.

The investigation of the attacks led police to a 15-year-old boy though they ultimately determined he was not involved in any of the attacks.

Investigators tracked the teen down on January 29 at the Woodcrest Apartments on the 1400 block of N 76th Street. Police were able to track him through one of the stolen cellphones, according to investigators.

The teen was charged with receiving stolen property though they say he is not the suspect in the robberies or attacks. Investigators are still unsure how he obtained the cell phone.

The suspect in the robberies and attacks is described as a slim black male between the ages of 20 and 27, standing 5-foot-6 and weighing 130 pounds with black hair and a light mustache. Police also say he normally wears a grey hooded sweatshirt and light blue jeans.

Police are offering a $10,000 reward to anyone with information on his whereabouts. If you have any information, please call Philadelphia Police.