Edward Cagney Mathews, 45, of Mount Laurel, was charged Thursday with criminal mischief, possession of a weapon (slingshot) for an unlawful purpose, possession of a controlled dangerous substance, stalking, possession of drug paraphernalia and other related offenses.

A New Jersey man who was arrested earlier this week after viral videos of him yelling racial slurs at neighbors led to a massive protest outside his home now faces additional charges of stalking and damaging his neighbors’ vehicles as well as drug violations.

Edward Cagney Mathews, 45, of Mount Laurel, was charged Thursday with criminal mischief, possession of a weapon (slingshot) for an unlawful purpose, possession of a controlled dangerous substance, stalking, possession of drug paraphernalia and other related offenses.

The investigation began on Friday, July 2, when a resident came to the Mount Laurel Police Department to file a harassment complaint against Mathews. Later that day, a Mount Laurel Police Officer responded to a home on Coventry Way for a report of a man who needed to be removed from the area. 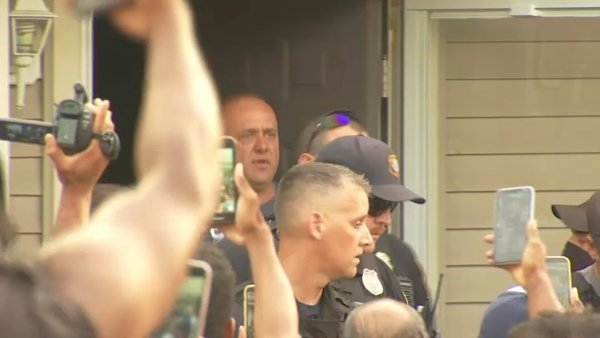 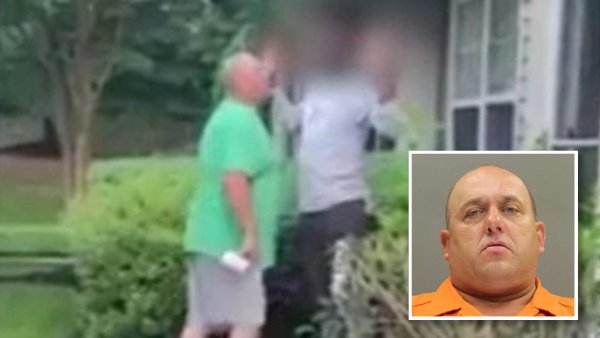 When he arrived, the officer found Mathews arguing with four residents and yelling racial slurs at them. Mathews was later arrested that night and charged with harassment and bias intimidation.

Mount Laurel Police said they requested that the charges be placed on a warrant which would have allowed them to take Mathews into custody and place him in jail. They said the request was denied by the Municipal Court judge who approved the charges however. The charges were instead placed on a summons, preventing Mathews from being placed behind bars.

Over the weekend, multiple videos were posted on Facebook showing Mathews yelling racial slurs at his neighbors.

During one video, Mathews repeatedly calls a Black man a “monkey” and a “n****r” while bumping his chest and appearing to spit in his face. Mathews also states his address in the video and invites the man to come to his home. On Monday afternoon, a massive crowd of protesters did just that. With police standing on guard, they protested outside Mathews’ home for hours.

Around 7:30 p.m. Monday, police took Mathews out of the home and led him to their squad car as the crowd pelted them with water bottles and other objects. Officials said the second arrest was due to additional charges that were filed against Mathews that were placed on a warrant.

The newest charges announced Thursday were filed following a search of Mathews’ Mount Laurel home by police. Police said the warrant was authorized after the department applied for an Extreme Risk Protection Order (ERPO) against Mathews which was issued based on the implied threat of the use of weapons he made to neighbors, investigators said.

One neighbor told police that she suspected Mathews had used a BB gun to damage vehicles belonging to her and her daughter.

Police said they seized a slingshot and multiple ball bearings that matched the projectiles used to damage the vehicles during their search of Mathews’ home. Investigators later determined Mathews had fired the ball bearings at two vehicles belonging to his neighbors, causing $2,350 in damage.

Mathews is accused of stalking one of his neighbors as well. Police also said they seized numerous psilocybin mushrooms, known for their hallucinogenic effect, along with packaging materials from Mathews’ home.

The Burlington County Prosecutor’s Office petitioned the Superior Court to keep Mathews jailed while his charges are adjudicated. A detention hearing that had been scheduled for Friday was postponed and rescheduled to July 13 due to the new charges.

“These new charges underscore the importance of our community members coming forward with any information they have about criminal activity, whether about this case or any other incident,” Mount Laurel Police Chief Stephen Riedener said. “Because someone recorded Mathews’ conduct on Friday night, we had the evidence to bring the previous charges, and the opportunity to gather the evidence that led to these additional charges, including for damage we allege he recently caused to his neighbors’ vehicles.”

The Prosecutor’s Office is also conducting an independent review of all previous incidents involving Mathews that were reported to Mount Laurel Police. Residents say Mathews had been harassing people of color in the town for years.

“Our office will continue to investigate the previously reported complaints lodged against Mr. Mathews,” Prosecutor Coffina said. “We urge anyone with information and/or evidence of criminal conduct to contact us at tips@co.burlington.nj.us, or 609-265-5035.”