Mauled Boy's Great Grandmother: “I Can Just Hear Him Calling”

The great grandmother of a 4-year-old Delaware boy mauled to death by three pit bulls says she's haunted by his gruesome death.

"Every time I close my eyes I envision what my baby went through. I just envision what he went through and I can just hear him calling 'Mom-mom, Mom-mom help me Mom-mom,'" said Kasaii Bennett's great grandmother Attlay.

The boy was playing in the backyard of his Felton, Del. home when the dogs, which belonged to a neighbor, attacked him, authorities said.

Kasaii's mother, who is several months pregnant, was inside the home with a friend and immediately rushed outside to help her son. The woman was bit several times as she tried to help the 4-year-old.

Two HVAC repair men also ran over to stop the attack, but despite beating the dogs with PVC piping, they would not relent, according to officials.

"Them dogs took my baby from me, and I resent that. And how they took him I can't come to grips with that," Attlay said fighting back tears.

Authorities said the dogs had known the boy his entire life. 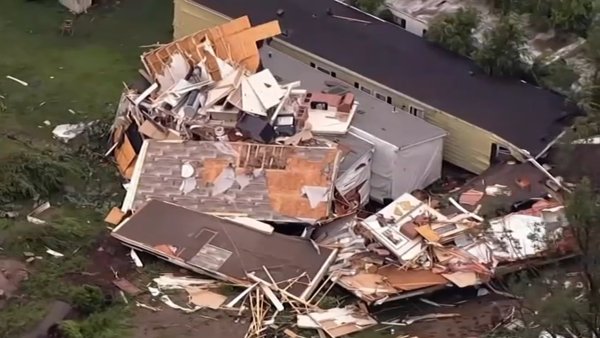 The First State Animal Center removed the dogs, which were unlicensed and not vaccinated, from the neighbor's care immediately following the attack. They were later put down, officials said.

Officials ran tests to determine whether they were infected with rabies, but the results came back negative.

The dog's owner was not home when NBC10.com attempted to get comment on the attack.

The boy's mother remains hospitalized following the ordeal as the rest of the family continues to reel from the tragedy.

"I don't know what to do we need help my whole family needs help on dealing with this tragedy," Attlay Bennett said.

The investigation is ongoing.

The Felton, Del. home was the scene of a fatal pit bull attack Wednesday.